TIers in Novi, Michigan and Sunnyvale, California increased their United Way giving and volunteerism after learning about community needs

When Bob Armbruster went through our new-employee orientation 23 years ago, he checked a box in his paperwork designating regular paycheck withdrawals for United Way. For the next 19 years – month after month, year after year – the deductions continued.

“I didn’t even think about it,” said Bob, a Worldwide Account Manager in the Bay Area. That all changed in 2011.

“I began wondering where the money was going and whether it was being put to good use,” he said. “I decided to find out, and I educated myself on all the United Way partner agencies and the different things going on in the Bay Area.”

Bob’s research into Silicon Valley’s United Way organization and how it used donor contributions revealed community needs so great that he began volunteering, became a member of the United Way Core Team and increased his contributions to become a Leadership Giver. 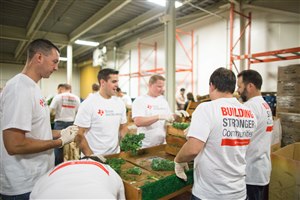 Across the country in Michigan, a customer invited Natalie Kneifel to a fund-raising event for a Detroit-area food bank. What she saw motivated her to take action.

“I thought, ‘If my customer can do this, why can’t TI do this?” said Natalie, a worldwide account manager.

So in 2014, for the Novi site’s first United Way campaign, Natalie recruited 17 employees to spend half a day sorting food at Gleaners Community Food Bank. Thirty-one employees returned this summer and spent another half day sorting food. The organization, which has served Detroit residents for 38 years, distributed 34 million pounds of emergency food to more than 510 partner soup kitchens, shelters and pantries last year.

Bob and Natalie each learned that educating people about community needs and encouraging them to get involved can transform them into active givers and volunteers. Both won TI Founders Community Service Awards earlier this year for their leadership in community service, including United Way campaigns.

“It’s important to take time to get involved in your community because there’s always a need,” she said. “It’s not that hard to do.”At the Sunnyvale sales office, Bob also began encouraging other TIers to give and get involved. For the last three years, he has coordinated the United Way campaign there. He invited the principal of a local elementary school to visit the office and tell TIers about needs in the low-income community and school. As a result, about 50 employees from the office spent a day painting, making the playground safer, building benches and making other improvements at the school for the United Way Day of Impact in November 2014.

But the team wasn’t finished. Last spring, the principal didn’t have enough money to send the school’s fifth-graders to science camp. TIers in Sunnyvale contributed almost $2,500 and got a matching grant from the TI Foundation. The students went to camp.

“It’s relatively easy to help coordinate a volunteer event, especially when you have warm-hearted co-workers who come together to make a difference,” Bob said. “It is part of our Sunnyvale culture, and it brings us closer together as an organization.”

The percentage of employees at the office contributing to United Way has increased from 9 percent to 52 percent, with over $47,000 contributed annually, including TI’s matching contribution. Bob is now co-chairman for the Bay Area United Way campaign. 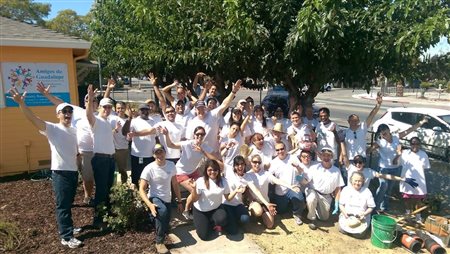 TIers at the Novi and Sunnyvale sites saw a need and decided to make a difference.

“Many children in our area don’t have adequate food,” Natalie said. “The economy has improved a lot since the recession, but there is still a great need. Volunteering at organizations like Gleaners opens people’s eyes to the needs in our community and how we can get engaged and provide support with our volunteer hours and finances.

“Making it personal by educating people and getting them involved in a Day of Impact can get them on board pretty easily. TIers are generous people. We decided we wanted to do this, and people showed up to pledge and volunteer. We have a really good team atmosphere here, and this is a way we were able to express that,” Natalie said.

For Bob, getting involved shed a light on big problem.

“There’s all kinds of negative stuff in any big city,” he said. “San Jose is one of the most expensive places to live in the country. We have neighbors in east San Jose who are working-class families, but only are able to bring in an average income of $21,000 per household. The children in these neighborhood are our future residents and potential leaders, but in several cases they live in garages as makeshift bedrooms, three to four families per residence. Many of the neighborhoods are challenged with gang activity. It’s nice to go into some of these neighborhoods and help make safe havens where kids can learn and, hopefully, beat the odds. That’s what it’s all about. It’s rewarding to see the smiles on their faces.”