Last week TIer Jonathan Yin had in-depth conversations with scholars over Lunch with Scientist about what he does at TI, and TIer Chris Oberhauser did hands-on activities with the scholars Devyn Betts and Nyla Choates as he introduced them to sensors.

Chris and Jonathan were among the TI Santa Clara volunteers who teamed up to put together a week of hands-on science, technology, engineering and mathematics (STEM) learning for 60 high-achieving elementary and middle school scholars. 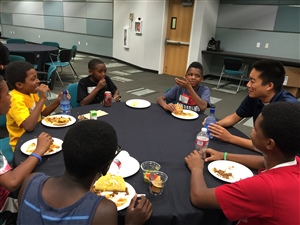 The site has partnered with the Frank Greene Scholars Program for a number of years to put on the Summer Science Institute to help create excitement about STEM among a select group of outstanding African-American students from area schools. The program is named for Dr. Frank S. Greene, Jr. who was one of the first African-American pioneering technologists of Silicon Valley. 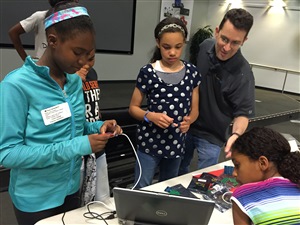 Throughout the week, the scholars worked directly with a team of TI engineers who volunteered their time and ideas for activities that explored innovation, technology, biomechanics and meteorology. In this collaborative team environment, these young scholars were encouraged to conceptualize and develop their own innovative projects, and, at week’s end, present a product idea based on what they learned.

On the first day of the camp Dr. Gregory Bouyer, a neurologist at West Coast Surgical Group, visited the Frank Greene Scholars camp to talk about why exercise is important and how the brain connects to your body. Scholars learned about the different areas of the brain and how to read signs of stroke.

On another day TI engineers Maurice Eaglin and Jonathan Yin, along with John Paul De Guzman, TI’s Santa Clara wellness manager, teamed up to talk about the science behind a basketball containing TI chips, the Nerf 9450. Middle school scholars experienced first-hand how the basketball connects to an app to tell the player/coach how to improve their game.

Maurice was able to spend some time with his daughter, Sherese during the activity.  Maurice, who has been a longtime volunteer for the Frank Greene Scholars Program, enrolled his daughter a couple of years ago because he believes in the mission and vision of the organization.

“It takes a village to grow a child,” said Gina Hendy, Frank Greene Scholars Program Manager.  “Our parents are heavily involved in the program, and it is the reason for our success.  One hundred percent of the scholars go to college and the majority go into STEM-related fields.  We expose our scholars to real-world high-tech environment that spike interest through hands-on activities.  We are thankful for Texas Instruments’ continuous support in encouraging African-American youth to pursue higher education, especially in the engineering fields.”

The scholars had an opportunity to have lunch with employees at the TI Santa Clara café. TI Product Marketing Engineer Tenille Medley attended to serve as a role model.

“I see myself in these kids” said Tenille, who was born and raised in Chicago. She is very passionate about helping kids get interested about STEM fields, especially underrepresented minorities and girls.

“I was not aware of careers in engineering until I went to college,” she said. “Programs like the Frank Greene Scholars Program, that introduce K-12 students to STEM fields is something I could have appreciated if these resources were around. Therefore, I support programs like these.” Tenille has participated in the annual Frank Greene Scholars Summer Science Institute and Career Fair since she was transferred to TI Santa Clara last year.

TIer Aaron Simmons talked to the elementary school students about sensing. The middle school scholars had an opportunity to have lunch with eight TI scientists, engineers and accountants who answered questions about what they do at TI and what they did to get there.

The week ended with students making presentations about what they learned.  Here are a few of their comments.