TI technology breaks down the barriers of sign language

Imagine a device that wirelessly translates sign language to a computer. That’s what Lu Sun, a computer engineering student at the University of Texas at Dallas, has been doing for much of the past year – spending most of her time inside the four walls of a campus lab in the Texas Analog Center of Excellence. And with help from TIers and our technology, the master’s student has done it, conceiving a device that will translate signs for those who don’t know the language.

The university research project, funded by TI and the National Science Foundation, began in a unique way. Leo Estevez, a wireless sensors and controls maker at Kilby Labs Dallas, recently completed another research project at UT Dallas involving a brain cap that wirelessly records electrical signals from the brain to control such things as a computer mouse. Leo wanted to find a way to extend this research into other areas. That’s when he received a fortuitous Facebook message from his cousin Rocio Estevez, a teacher for deaf students in South America.

“She told me I am always doing a lot of cool stuff, it would be great if I could do something for her students,’” Leo said.

Leo realized the same device for the wireless brain cap could also be used to measure muscle movements when signing. So he partnered with Lu and her professor Roozbeh Jafari to combine our 8-channel ADS1299 biopotential measurement analog front end with an accelerometer to interpret sign language.

While Lu and Roozbeh got to work on the complicated algorithms required to translate muscle movements and accelerometer readings into words that appear on a computer screen, Leo looked for ways to update the wireless component of the device with the latest TI technology. Leo reached out to his friend Thomas Almholt, an applications manager in low power wireless, to see if he might have an interest in helping with the research project. The critical work in the UT Dallas lab took on a special meaning to Thomas. 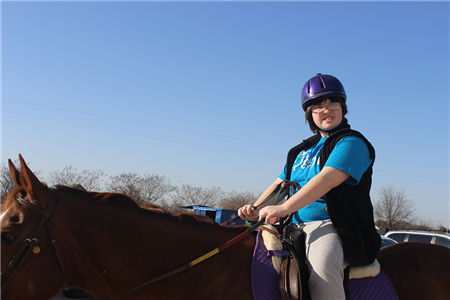 “My oldest daughter Cassandra was diagnosed at the age of two with a rare chromosome disorder, so rare it is simply called 1P36,” Thomas said. “1P36 creates delays in the cognitive and motor skills of a person, meaning she has difficulty communicating.”

Cassandra’s first language was basic sign language, and for a number of years, it was the only way Cassandra could communicate. To this day, sign language is still the easiest way for Cassandra to converse with others.

Eager to further the endeavor, Thomas began supporting the research project with the newest wireless device containing the lowest power, the SimpleLink™ Bluetooth® Smart CC2640 wireless MCU. While Thomas is passionate about aiding in the innovations of our customers, this particular project was extra special.

“It is on a different level. Most of my work enables customers to make electric, gas and water meters. It is definitely interesting and important, as well as good for society, but this is a much more personal project,” Thomas said.

Today, the sign language interpreter can successfully wirelessly translate 40 signs from a person to a laptop. The sign language interpreter took 2nd place in the 2015 Texas Instruments Innovation Challenge (TIIC) North America Design Contest. Despite the recent recognition, Lu and her partners Zhongjun Tian and Jian Wu, students in the Erik Jonsson School of Engineering and Computer Science, said they can’t wait to get back in the lab and expand the device’s capabilities and mobility.

Watch the video below to see the sign language interpreter in action:

“I look forward to increasing the number of words the interpreter can handle, so it can really help deaf people to communicate with others. And I think we can develop an Android-based application so that deaf people can have a phone call with each other using this technology,” Lu said.

On the TI side, both Leo and Thomas credit their management team for making the project a reality – and seizing an opportunity to create technology that could change the lives of an estimated 70 million deaf or hearing-impaired people.

“This could be transformative, particularly for kids in classes like my cousin’s,” Leo said. “These kids fall behind all the time, but this gives them a chance at an equal opportunity.”

“This speaks to one of the reasons why I joined TI and why I am staying. It is great when a corporation is doing well for it and its employees, but we also do some of these activities because they are the right thing to do,” Thomas said.