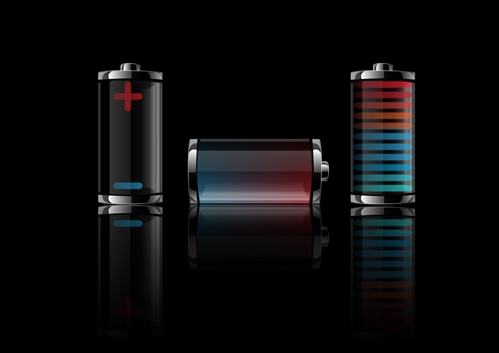 In a previous post, I talked about battery form factors. This time, let’s get into a little bit of alphabet soup, starting with cell configuration.

The nomenclature here is xSyP, which is shorthand for “how many cells are in series and how many are in parallel.” More cells in series will raise the voltage, while more in parallel raises the capacity in terms of ampere-hours (mAh or Ah). Since P=I*V, you can calculate the watt-hours by multiplying nominal voltage by nominal ampere-hours. Li-ion batteries typically have a nominal voltage of 3.7V, with some newer ones averaging 3.8V. They typically charge up to 4.2V and discharge down to 3.0V, so you can calculate the voltage range of an entire pack by multiplying those limits by the number of series cells. Note that some newer cells with advanced electrolytes support charging up to 4.35V and even higher, so check your battery or cell data sheet to get the full picture.

The next letter you will see thrown around is “C,” as in “C-rate.” It’s a way to specify charging or discharging current as a ratio of the nominal battery capacity. Think of C as “capacity,” so if your battery label says “capacity: 1000mAh” and someone says to charge at a C/2 rate, that means to charge with a current of 1,000/2 = 500mA. If the discharge is specified at C/5, that means a current of 200mA. Sometimes these are also called “hour rates,” since they refer to the current that would nominally discharge a full battery to empty in that number of hours.

C/5 means to use a current that would discharge the battery from full to empty in about five hours. Again, these are “nominal” because discharging at C/2 might actually result in hitting empty in less than one hour, depending on the temperature, cell characteristics and other factors.

Let’s close with a few three-letter acronyms: SOC, DOD and SOH. State of charge (SOC) is the percentage that you see on your phone or computer. This is actually a relative measure since it depends on the system characteristics as well as load and temperature, but it gives you a rough idea of where your device’s battery is between full (100%) and empty (0%). Depth of discharge (DOD) can be thought of as the inverse of SOC. A DOD of 100% means that a battery is fully discharged and has no more energy at all, while a device reporting SOC = 0% could still have juice in the battery – just not enough to operate.

State of health (SOH) is another percentage measure, but instead of how much remaining energy is in your battery now, it tells you roughly how old your battery is compared to a new one. Like SOC, it’s also a relative term that depends on system characteristics. When SOH = 80%, it means that your battery, when fully charged, will give you about 80% of the run time as it did when it was new. Instead of just going on your gut feeling that your battery’s not lasting as long as before, SOH can give you a more solid number to quantify it. Not all products report SOH (or they don’t report it accurately), since it requires a fuel gauge that can track a battery’s characteristics as it ages. TI’s Impedance Track™ algorithm is the only one on the market that can track aging battery impedance, so gauges like the bq27421, bq27532 or bq40z50 are some of the only ones that can accurately report SOH.

Now that we’ve covered some basic terminology, in future posts I’ll discuss SOC in more depth. There’s a lot more to understanding that percentage number than most people think. Until then, if you want to dive in, head over to ti.com/battery and click the BMS University tab to view some presentations on fuel-gauging basics.