TI E2E support forums
Archives
Fully Charged Energy harvesting is not new - so why isn’t everybody using it?

Energy harvesting is not new - so why isn’t everybody using it?

Energy harvesting – as most of us know it – has been around for thousands of years. Centuries ago, windmills were used to harvest wind energy. Solar water-heating systems have been in existence since the early 1900s. Since then, people have stretched their imagination to find ways to store and use “free” energy.

Most early energy-harvesting systems were industrial size. Today, the driving force behind the new wave of energy-harvesting devices is the desire to power wireless-sensor networks, or to extend battery life in mobile applications. This led to the development of a technique called microenergy harvesting. A microenergy-harvesting system continuously harvests microwatts to milliwatts of power from ambient sources, storing the energy for later use. Many electronic circuits such as microprocessor-based wireless-sensor nodes require only a few hundred microwatts to function. Thus, a system capable of harvesting small amounts of energy from its environment can practically power a small wireless-sensor node perpetually. Sounds simple, right? But is it too good to be true?

Large-scale adoption of microenergy-harvesting systems has been slow due to several factors.

First, for a long time, the biggest challenge was the availability of efficient harvester elements (such as solar cells and thermoelectric generators) that gave a higher power output in small form factors. Most harvesters are extremely inefficient converters of energy. For example, only about 20 percent of incident-light energy gets converted to electrical energy in a solar cell.

Second, the high quiescent power consumption of the electronic systems itself was a deal breaker. For example, a system that consumes milliamps of current in its sleep state will create a negative energy balance (more out than in), leading to more reliance on, and eventual depletion of, the system’s battery.

These challenges were preventing widespread use of microenergy harvesting. However, now there is serious hope. 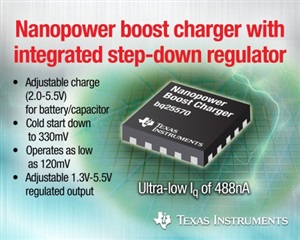 Harvester providers are taking giant strides in producing harvesters that now give more output for their size. For example, some dye-sensitized solar cells (DSSCs) can now output 20-25µW/cm2 of power at a mere 200Lux (typical office lighting is 600-1,500Lux), thus making microenergy harvesting more attractive. This is more than sufficient to run a small well-designed sensor node whose average power requirement is 60-100µW. 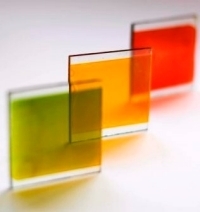 There are other factors that are also critical to the success of an energy-harvesting system.

First is the duty cycle of system – this is decided by the duration that the system is active versus the duration it is sleeping. Total system-power consumption is dominated by sleep current. Hence, by keeping the sleep current as low as possible, extended run times are achievable.

Second, the system should have advanced features such as an maximum power-point tracking (MPPT) feature. The TI bq25570 IC supports MPPT, which is a way to optimize the power extraction from the harvester.

Third, the system should be capable of intelligently managing the power transfer from the harvester to the battery. Features such as battery management, battery under-voltage and over-voltage protection make the system more robust and safe.

Indoor light harvesting will lead the way to more wide-scale adoption of microenergy harvesting. The applications are potentially huge: home and factory automation, security systems, smart buildings, and medical and fitness applications. TI engineers are ready to assist you in your next innovative design. The question is, are you ready?