Lithium ion (Li-Ion) or lithium polymer (LiPo) batteries are key components in some portable systems, especially power banks. But on rare occasions, these batteries have the potential risk of catching on fire or even exploding in short-circuit, overvoltage or high-temperature conditions. An increasing number of such incidences are occurring even today.

To help safeguard consumers against these conditions, Underwriters Laboratories (UL) announced the first dedicated safety standard for the power bank industry at the end of 2015. One of the key test items is the output power overload test, which presents a new challenge for power bank designers. Because most power banks don’t have output short-circuit protection functions, they can easily fail the overload test.

In fast-charge power banks with high battery capacities, there’s a high-power boost converter between the power bank’s internal battery and its output port. We know some designers want to achieve output short-circuit protection by using an MCU (which already exists in power bank systems) to judge the boost converter’s output current. The designers put a sense resistor and a power MOSFET in the boost converter’s output return and sense the output current by detecting the voltage, VSENSE, across the sense resistor. The MCU’s analog to digital converter (ADC) pin samples the VSENSE and compares it with the internal overcurrent protection point. If VSENSE is higher than the target value, one of the MCU’s input/output (I/O) pins will go high and the power MOSFET in the return path will turn off, disconnecting the boost converter from the load.

The logic of this protection solution is fine, but it does not work in practice. Why? The problem comes from the MCU’s long response time. The MCU will need at least several milliseconds before taking action in a short-circuit condition. In the meantime, the boost converter’s input and output current will reach a very high value before they can be disconnected from the load. This high short-circuit current can damage the battery and cause other issues.

The TI Designs Output Short-Circuit Protection Reference Design for the TPS61088 Boost Converter (PMP9779) is designed to solve this problem. The key advantage of the design is its fast protection speed: The total response time is only about 5µs. Let’s take a look at the implementation (Figure 1). 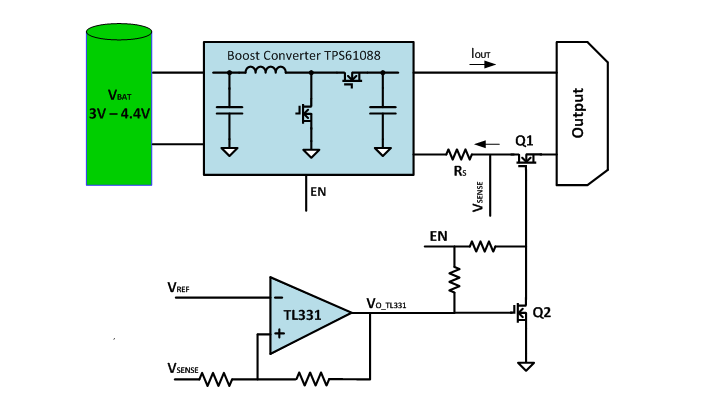 A shunt resistor, RS, placed in the boost converter’s output return path converts the output current to a voltage signal, VSENSE. In an overload or output short-circuit condition, VSENSE will be higher than the reference voltage, VREF. Thus, the TL331 comparator’s output signal, VO_TL331, goes high. Q2 turns on and pulls down the Q1’s gate-drive voltage to ground. So Q1turns off. The TPS61088 boost converter is completely disconnected from the load. The hysteresis comparator circuit helps Q1 avoid from turning on and off frequently before fault clearing. Once the output overload or short-circuit condition is cleared, the circuits can recover by toggling (disabling then enabling) the TPS61088’s EN pin.

Figure 2 shows the output short-circuit protection performance at a VOUT = 5V condition. From the waveforms of the Q1’s gate-drive signal, Vgs_Q1, and the output current IO, you can see that the TPS61088 can disconnect from the load within 5µs in an output short-circuit condition. The input current of the boost converter, which is also the output current of the battery, is well limited and doesn’t rise to a very high value because of the fast protection speed, preventing the battery’s self-protection function from triggering.

With the above simple yet effective OCP protection circuit, the TPS61088 boost converter can be disconnected from the load within 5us, which makes your power bank more reliable in the output short circuit condition. Besides power bank applications, this TI design also fit for blue-tooth speaker, portable POS terminals applications and more.

In what other applications could you use this protection method?