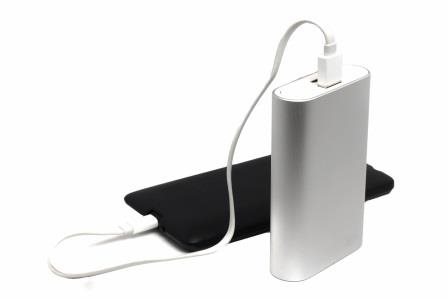 A key design challenge when designing a power bank is passing the electromagnetic interference (EMI) test. Electronics engineers often fear EMI test failures, and it would be a nightmare if the circuit failed the EMI test again and again. You would have to work day and night in the lab to fix the problem to avoid product launch delays. For consumer products like power banks, the design period is short, while the EMI certification limit is strict. So you want to add enough EMI filters to pass the EMI test smoothly, but you also don’t want to increase space or add much cost to the circuit. It seems hard to achieve both.

The Low Radiated EMI Boost Converter Reference Design provides such a solution. It can support a 2.7V-4.4V input voltage, 5V/3A, 9V/2A and 12V/1.5A output power, making it fit for the power bank applications. By optimizing the placement and layout, this reference design can get higher than 6dB margin in EN 55022 and International Special Committee on Radio Interference (CISPR) 22 Class-B radiation tests. Let’s take a look at the design process.

EMI starts off from the high instantaneous rate of current change (di/dt) loops. So you should differentiate the high di/dt critical path at the beginning of your design. It is important to understand the current conduction paths and signal flows in the switching power supply.

Figure 2 shows the pin configuration of the TPS61088. Figure 3 shows the TPS61088 critical current path layout example. The NC pin means that there is no connection inside the device, so it can be connected to PGND. From an electrical point of view, connecting the two NC pins to the PGND ground plane is good for thermal dissipation and can reduce the impedance of the return path. From an EMI point of view, connecting two NC pins to the PGND ground plane makes the VOUT and PGND plane of the TPS61088 much closer to each other. And that makes the placement of the output capacitors much easier.

From Figure 3, you can see that placing one 0603 1µF (or 0402 1µF) high-frequency ceramic capacitor COUT_HF as close to the VOUT pin as possible results in a minimum area of the high di/dt loop. 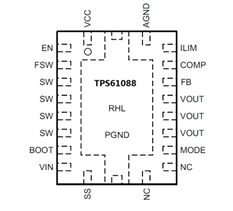 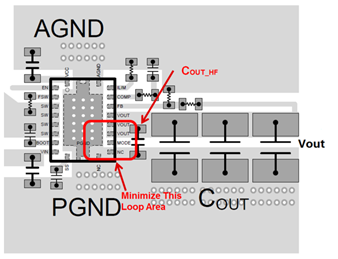 Equation 1 calculates the maximum electric field strength from such a high di/di loop over a ground plane at a 10m distance:

Where A is the loop area,

is the current flowing in the loop,

Figure 4: Radiated EMI result with and without COUT_HF

Putting a ground plane under the critical path

High trace inductance leads to poor radiation EMI because the magnetic field strength is in direct proportion to the inductance. Placing a solid ground plane on the next layer of the critical trace can solve this problem.

Table 1 gives the inductance of a given trace on different printed circuit board (PCB) boards. You can see that for a four-layer PCB with a 0.4mm insulation thickness between the signal layer and the ground plane, the trace inductance is much smaller than that of a 1.2mm-thick two-layer PCB. So putting a solid ground plane with a minimum distance to the critical path is one of the most effective ways to reduce EMI.

Figure 5: Radiated EMI result of a two-layer PCB and a four-layer PCB

If the radiation level still exceeds the requirement level and the layout cannot be improved anymore, then adding a resistor-capacitor (RC) snubber across the TPS61088’s switch pin and the power ground can help reduce radiation EMI levels. The RC snubber should be as close as possible to the switching node and the power ground (Figure 6) to effectively damp out switch voltage ringing, which means that you can improve radiated EMI at the ringing frequency.