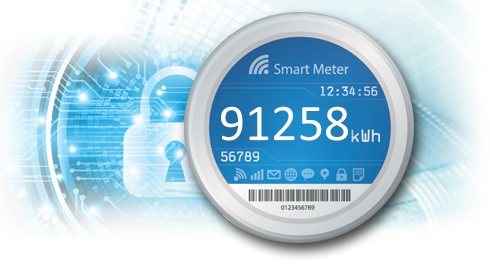 With electricity providers striving to reduce energy loss, energy theft prevention is a major concern.  Specifically, utility companies seek to prevent energy meter tampering that may lead to obtaining electricity that is not properly billed by the meter to the customer. To prevent energy theft due to the unauthorized modification of energy meters, many markets require that meters include anti-tamper mechanisms to not only detect different meter tampering methods but also to prevent or mitigate their effects.

There are multiple techniques for tamper detection and prevention.  First, for tamper prevention the first line of defense should always be the meter case. The meter case should be sealed so that easy access to the meter is not allowed and there are no spaces that may allow entering objects to bypass the sensed current. As an additional precaution, a button can be added within the case so that a trigger is generated whenever a case is opened.  For some processors such as the ultra-low power MSP430F67791A microcontroller (MCU), there are specific capture pins on the chip that can be used to log the time of the trigger even when the main power to the DVCC is not available.  An example of this functionality can be found in the TIDM-AUX-MODULE design. 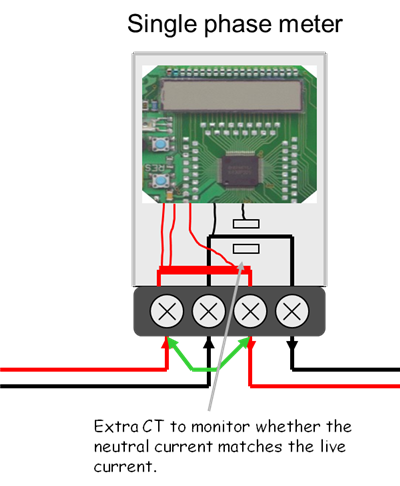 In the drawing, the red arrow connected to the first terminal on the left corresponds to Live_In, the black arrow connected to the second terminal on the left corresponds to Neutral_In, the red arrow connected to the third terminal on the left corresponds to Live_Out, the black arrow connected to the fourth terminal corresponds to Neutral_Out, and the set of green arrows represent someone trying to bypass current at the terminals pointed to by the green arrows. In this configuration, the energy consumption is calculated using the voltage between Live_In and Neutral _In and the current sensed across a shunt connected between Live_In and Live_Out.  A similar calculation is also done using the same voltage between Live_In and Netural_In as well as the current produced at the secondary of a current transformer that has its primary connected between Neutral_In and Neutral_Out. By measuring both line and neutral currents, this can help detect someone trying to tamper a meter by bypassing current. Additionally, by calculating average active power as a signed number, tampering with a meter to count in reverse can be detected by checking if the signed average active power is negative (assuming net metering is not supported).

There are multiple options to combat magnetic tampering. First, any items that are vulnerable to magnetic tampering should be orientated such that it is difficult to place a magnet near these susceptible items. Susceptible components could also be magnetically shielded to help lessen the effects of this type of tampering. Such components include current transformers as well as flyback converter transformers.  Shielding can prevent or minimize the possibility of these components saturating from a strong external magnet field and ensure they operate within their intended design region.

If it is difficult or not cost-effective to provide magnetic shielding, another option is to use a hall-effect sensor such as the DRV5033, DRV5032, or TMAG5273 to detect the magnetic field and take special action, as is done in the "Magnetic Tamper Detection Using Low-power Hall Effect Sensors TIDA-00839 reference design." More information on using Hall-effect sensors in this anti-tamper applications can be found in this application brief, this blog post, and this video.

Due to the effects of magnetic tampering on current transformers (CTs), shunts resistors may be used as current sensors instead of current transformers. For single-phase meters that measure both neutral and live current for anti-tamper purposes, many times one current channel would be measured with a CT and the other channel would be measured with a shunt to help deal with magnetic tampering of the CT. For poly-phase meters, shunts can also be used as current sensors, as is done in the "Multi-phase Energy Measurement with Isolated Shunt Sensors TIDA-00601 reference design." In order to allow shunts to be used in poly-phase systems, an isolated sigma delta modulator such as the AMC1304M05 is used to compensate for shunts not having inherent isolation.

With some of the common anti-tamper methods discussed, you now have knowledge on how to defend against common meter tampering techniques.  In order to make your job easier, here are some designs and devices from TI that simplify the tamper detection and prevention process: