Myth No. 1: Hall-effect sensors provide only simple on and off information.

Many electromechanical designs require the detection of an object by using a sensor, which provides a simple logic signal indicating its presence or absence. One example is opening and closing a laptop, indicating when to power on or off. Another example is an intrusion event in a door and window sensor. These applications typically use a simple Hall-effect switch that toggles its output voltage once an internal magnetic threshold has been crossed. While these Hall-effect switches are useful, they are not the only type of Hall-effect sensor available – latches and linear devices are also quite common. In contrast to a switch, a latch, which is mainly used in rotary encoding, will toggle its output only in the presence of an opposite magnetic polarity to what it had previously experienced. For precise displacement measurements, linear Hall-effect sensors are preferable because they can define, with high resolution, where an object is relative to the sensor – providing much more than on and off information. Figure 1 illustrates the transfer functions for each type of sensor, including the variations available.

Myth No. 2: Low-power solutions are not achievable with Hall-effect sensors.

While it’s true that some Hall-effect sensors consume current in the single-digit milliampere range, making them unsuitable for battery-operated applications, there are other Hall-effect switches that support low sampling rates (5 Hz or less) and consume an average current less than 1 µA. These devices cycle between a high-power active measurement state and an ultra-low-power sleep state to achieve low power consumption. Because the active state (tactive) duration is much shorter than the sleep interval (ts), the total average current consumption is very low (see Figure 2).

Myth No. 3: Hall-effect sensors have a very limited operational range.

There are also those who believe that Hall-effect sensors don’t have a good range for practical use because magnetic fields decay exponentially over distance. However, Hall-effect sensors with high sensitivities can detect useful magnetic fields from a good distance away. Take for example the DRV5032. Table 1 shows the head-on sensing distances of all of the device variants offered using a small low-cost ferrite magnet (12 mm by 12 mm by 6 mm). The lowest-sensitivity DRV5032ZE can detect this magnet from 4.0 mm to 7.5 mm, while the DRV5032FA version ranges between 18.7 mm and 44.6 mm. If using a stronger, same-sized NdFeB-grade-52 magnet, this detection distance increases to almost 3 in.

The vast majority of Hall-effect sensors on the market have only three pins – VCC (power supply), output and GND (ground) – and so the general thought is that three wires must be wired to the sensor. This is not true. As shown in Figure 3a, an open-drain, voltage-output, three-pin Hall-effect switch connects remotely with only two wires. When sensing a magnetic field, the device will produce a current output through the GND pin. If no field is detected, the device’s output will not produce any current and, in turn, produce no output current through the GND pin. Note that determining the logic state of the resistor requires an analog-to-digital converter (which may be integrated into a microcontroller) and an external resistor. The problem with this configuration is that it can produce invalid voltage levels under noisy conditions.

Ensuring reliable data transmission requires a current-output device to reduce or eliminate signal distortion. The TMAG5124 is a two-pin solution requiring only a power-supply voltage and ground to operate. Figure 3b shows how to implement the device by using the GND pin to transmit either a low- or high-level current (both in the milliampere range). 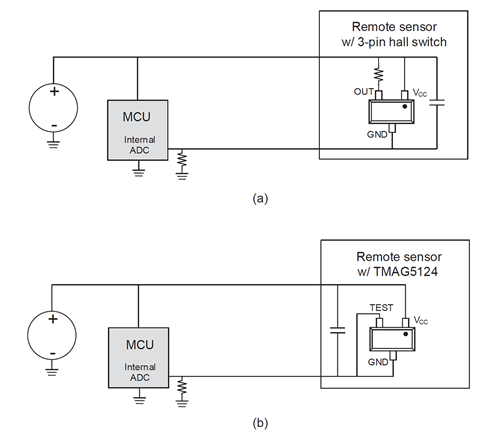 Figure 3: Two-wire remote sensing using a voltage-output Hall-effect switch (a) and a current-output TMAG5124 (b).

Myth No. 5: There is no flexibility in magnet placement when using Hall-effect sensors.

Magnet placement relative to the sensor depends on many factors – some are system-level factors, while others are inherent to the sensor itself. External system factors that dictate the placement of the magnet are mainly the magnet size, magnet material type and the temperature operating range. The larger the magnet, the larger the magnetic field produced. Of the most common magnets used, neodymium iron boron (NdFeB) magnets produce the strongest magnetic fields, so they are generally smaller in size. It’s also important to consider heat when selecting a magnet, as it typically degrades the magnetic field produced.

The main factors impacting magnet placement that are specific to the sensor are sensitivity levels, sensing directionalities (in plane vs. out of plane), package offerings, number of sensors onboard and configurability. A Hall-effect sensor with higher sensitivity can detect a magnet farther away. Most Hall-effect switches and latches detect magnetic fields perpendicular to the surface of the package, but some can detect horizontally (or in plane) with the package. A good example of this is the TMAG5123, which provides even more mechanical flexibility in designs when vertical displacement is not possible. Another example is the use of 2D dual-channel latches that have the ability to monitor multiple axes; you can place them virtually anywhere in relation to the magnet.

The use of Hall-effect sensors is so widespread that almost daily I hear about a new application that is novel and interesting. My expectation is that this set of five myths will spur an idea for your next-generation design.

Feel free to share any common misconceptions you would like to see us cover in the comments below.