Electrical noise can be a designer’s worst nightmare, leading to unexpected system behavior or even failure that is very difficult to trace. In traditional High-speed complementary metal-oxide semiconductor (CMOS) logic, noise can lead to signal oscillation, resulting in higher current consumption and even producing signal errors. These errors can ultimately lead to a system malfunction, requiring more engineering effort and possibly a design change.

Many design engineers combat signal noise by using external Schmitt-trigger input-based logic buffers. Schmitt triggers eliminate oscillation by using two thresholds for signal transitions, which clean up both slow and noisy signal edges and prevent noise from propagating down the signal chain and resulting in signaling errors. The net result is better system robustness and performance. Figure 1 shows the benefits of Schmitt triggers. 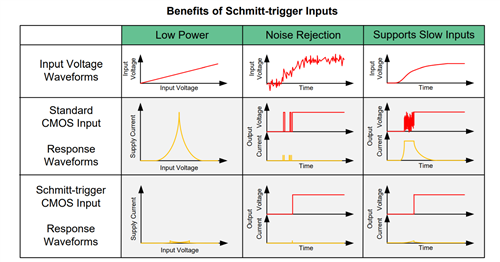 The logic devices used by a system designer can play a critical role in enabling designs that are less susceptible to noise. TI’s HCS logic family, which includes new shift registers SN74HCS595, SN74HCS164 and SN74HCS165, supports solutions for a diverse set of markets, from industrial and automotive to personal electronics. The HCS logic family provides the building logic blocks for next-generation systems with superior robustness, power efficiency and performance. Figure 2 shows an application using an SN74HCS595-Q1 to control seven-segment displays. 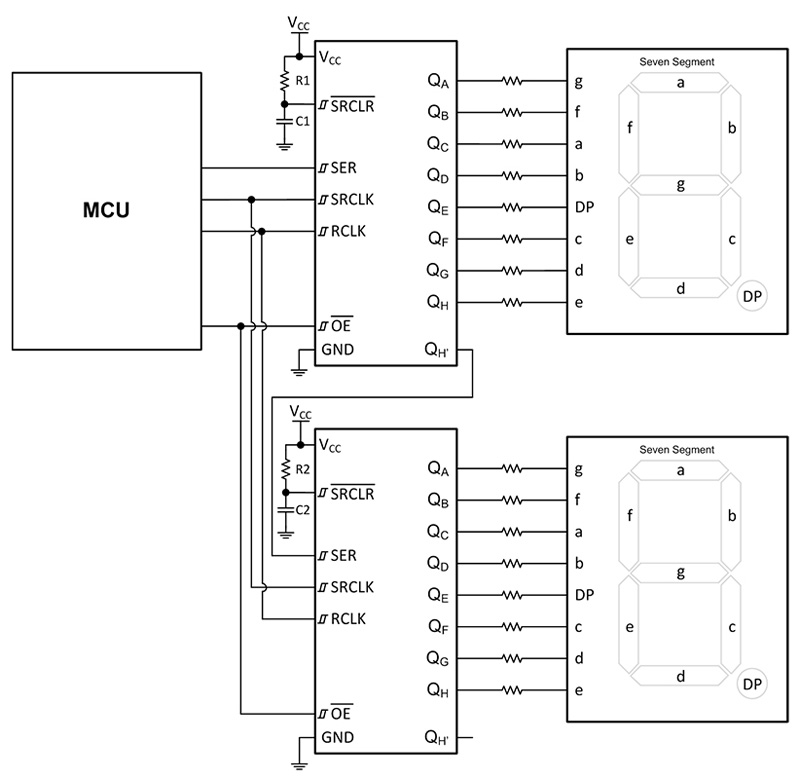 Figure 2: An application using an SN74HCS595-Q1 to control seven-segment display

These devices provide advantages over existing solutions, including:

High-speed complementary metal-oxide semiconductor (HCMOS) multi-gate logic functions have been in use for several decades by the electronics industry. The HCS family is an update to the HC logic family. HCS logic modernizes multi-gate logic functions to meet the needs and demands on today’s system designers. Each HCS logic part, numbered SN74HCSxx, is a pin-to-pin drop-in replacement for existing HC logic parts, with no need to update designs or change development tools.

Selecting a logic family today for noise-sensitive, low-power and rugged applications in markets such as automotive and industrial is complicated. Today, design engineers have to integrate a disparate set of components to create a system that balances power consumption, performance, reliability and cost.

The HCS family simplifies logic device selection and product design by providing an entire family of multi-gate logic functions that address noise and/or power concerns, integrating Schmitt-trigger capability on every data input. Schmitt-trigger input functionality directly benefits a wide range of applications. Applications such as advanced driver assistance systems and factory process controllers are just a few examples of the systems that can benefit from HCS logic devices. The integrated Schmitt triggers help improve noise immunity and glitch-free operation in systems without the need for external signal conditioning; see Figure 3. The HCS family was designed with automotive applications in mind and is the first TI logic family to launch with a complete line of both commercial- and automotive-grade parts.

Built for efficiency and robustness

The HCS family improves efficiency not just by eliminating the need for external signal buffering but also by directly reducing power requirements for a system’s logic implementation. Quiescent current (IQ) for an HCS part is just 2 μA, compared to 20 μA for comparable HC logic. Each device in the 2-V to 6-V HCS family consumes 95% less power than its equivalent HC logic function, making HCS logic devices much more suitable for battery-powered designs.

Extremely low power consumption is just the beginning. The HCS family also minimizes delays, with a 40% improvement in propagation delay, while improving current drive by 50% over HC equivalent devices. This means that designers do not have to compromise on performance in order achieve lower-power system logic implementations.

Choosing a logic family is about more than just selecting a bundle of devices. To help you get up to speed on the HCS logic functions, TI has produced application notes, training materials and technical articles. In addition, the HCS family is backed by a dedicated TI logic application support to help you reduce design cycles, meet design budgets and find an easier path to market for your final product.

The new HCS family incorporates many of the features and capabilities that designers have demanded, such as Automotive Electronics Council-Q100 qualification, dramatically lower power, noise tolerance and robust signal performance, all while maintaining backward compatibility.

The HCS logic family is more than just a new logic family. It's a way to improve the robustness of your designs.