Active RS-232 power consumption: Why isn’t it in the data sheet?

System designers will often not find active power consumption mentioned in a typical data sheet. Many RS-232 interface device data sheets only specify supply current for unloaded and shutdown setups. However, an RS-232 device is only useful for communications when connected to a remote RS-232 device. The data cable’s capacitance and remote receiver’s resistance are loads to the local RS-232 device that increase power consumption. While most new RS-232 devices will have at least one active current or power specification, there are many with none.

Equation 2 is the data cable’s power consumption expressed as driver peak-to-peak voltage squared multiplied by frequency and capacitance. The number of local RS-232 drivers doesn’t matter because only one driver toggles at a time.

For devices that don’t have capacitor- or inductive-charge pumps, the supply current needed for the load is the same as the load current. Supply and output current are directly proportional, just like a linear voltage regulator.

Therefore, you will need to convert the load power into a load current. Load current is load power divided by the driver voltage.

Use the active load current, which is same as supply current, to calculate supply power consumed as a result of the load. Add the no load power to get the total system device power

Here are two examples of how to calculate active supply power.

Because this current comes from VDD or VSS, the supply power needed to support the load is 9V x 12mA = 108mW.

This device has a capacitor-charge pump that boosts and inverts voltage at the expense of current. If the data sheet had two specified loads, you could calculate the charge-pump efficiency, but it does not. In this case, you must measure active current empirically. Power consumption varies with frequency of the data stream and cable capacitance as well as receiver input resistance. See an example below: 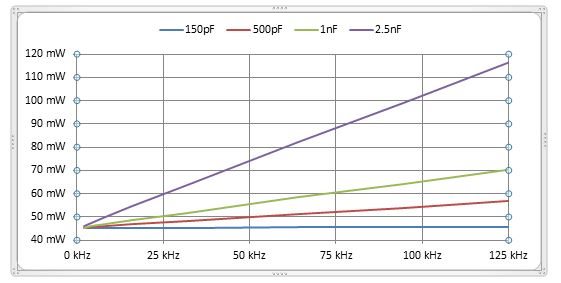 Early TTL-based RS-232 devices did not have active-current specifications; that was OK because the active power was easy to calculate given the triple power-supply topology. Later single-supply charge pump RS-232 devices continued the “no specification for active power on the data sheet” mentality, but that’s a mistake, because you can’t calculate power from the data sheet alone. Visit the TI E2E™ community RS-232 forum for help wherever the data sheet doesn’t provide sufficient information.