This is the third post in a series of blog posts comparing non-radio frequency (RF) vs. RF amplifier specifications. In my previous two posts, I discussed noise and two-tone distortion. Today, we will discuss an equally important topic, amplifier output limitations. For amplifiers in any application, there is always a limit to how far the output voltage can swing and how much current can be delivered to a load. These limits are fundamentally set by the device power-supply voltages, output-stage architecture and process technology limitations. Most linear amplifiers include a specification stating the maximum and minimum supported output voltage and maximum current.

For RF-oriented amplifiers such as low-noise amplifiers (LNAs), RF power amplifiers (PAs) and RF gain blocks, the output-swing limitation is usually expressed as a 1dB gain-compression point. As linear and RF amplifier speeds blend together in modern high-speed amplifiers such as the LMH6401 variable-gain amplifier, it is important to understand how the two specifications are related and the manner in which they reflect device performance.

Output voltage is typically measured one of two ways. The simplest is to record the output voltage while inputting a signal that will cause the output to try and far exceed the expected output limits. This test will tell you the most extreme values you can expect from the output, but doesn’t tell you anything about how the amplifier will perform with a signal reaching those voltages.

Figure 1 shows an example of the output maximum for the LMH6401, where the output visibly “flattens” as it passes a maximum. However, what is more useful for guaranteeing performance is the concept of a maximum “linear” output voltage. This is an output-voltage value where the amplifier is guaranteed to still retain its linearity performance and function normally. 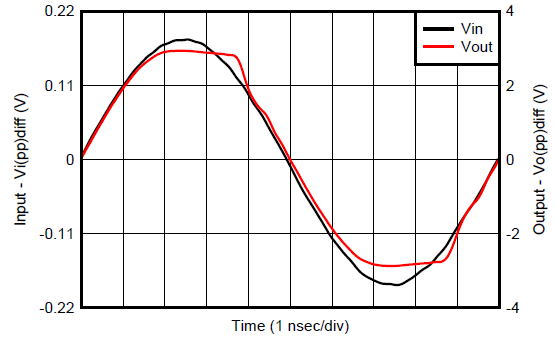 Output-current specifications are similar to output voltage and often include a “short-circuit current,” which is the current the amplifier will deliver into effectively no load, as well as a linear output current, which is conceptually the same as the linear output voltage but specified in terms of current-delivering capability.

The second specification, the output 1dB compression point, is actually very similar to the concept of a maximum linear output voltage and current. Also known as P1dB, this point is defined as the output power level that causes the gain of the amplifier to compress by 1dB from the ideal. Figure 1 illustrates this concept, where the solid line represents the measured signal and the dashed line is the ideal. Occasionally, some measurements refer the P1dB point to the input, instead of the output, which you should then consider in your calculations. 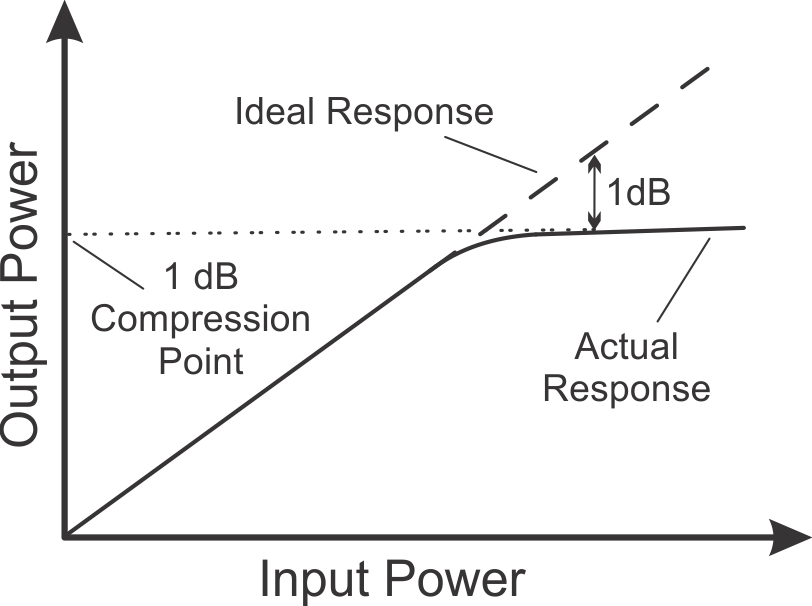 Because the P1dB specification marks the point of 1dB gain loss, it gives you a good reference to the maximum linear output point as opposed to just an absolute maximum voltage or current. As discussed earlier in this post, a measurement of linearity provides more useful information for guaranteeing system performance. The P1dB specification also has the advantage of capturing a maximum output power instead of just a voltage or current. In other words, you really are looking at the maximum voltage driving a certain load, which means that the P1dB measurement considers both current and voltage effects.

For amplifiers with just a P1dB specification, you can use your knowledge of the load during the measurement to extract the voltage and current values, but this doesn’t necessarily imply which of the two is limiting the device performance. You need the P1dB measurements at multiple load values to fully understand the amplifier’s output voltage and current limits.

Have you ever struggled with amplifier output specifications? What type of issues did it cause in your design? Log in below and leave a comment.