DisplayPort(TM) over USB Type-C(TM): One connector to rule them all

We’re living in interesting times when it comes to bandwidth needs for data, audio/video (A/V) and power over single connector and copper cable. The Video Electronic Standards Association (VESA) and Universal Serial Bus (USB) Implementers’ Forum (USB-IF) upped the ante with 5+Gbps bandwidth standards, which have enhanced the user experience. The issue has been that data, A/V and power have required separate connectors in a system.

One solution had power and data capability but minimum A/V; another had high-quality A/V but minimum power and data. Several technologies came out in an attempt to solve this quandary, including Thunderbolt and DockPort. DockPort used a simple scheme to multiplex and demultiplex USB and DisplayPort data across a miniDP connector. This excited many designers and end-product consumers, as USB is a familiar data technology. DockPort still lacked a standardized power solution, however, that would charge and power a mobile device during operation across one connector. It also became evident that consumers no longer wanted to use connectors that were keyed, and preferred flippable ones. So USB-IF decided to develop the USB Type-C connector.

Many companies came together and worked toward a scheme using a DockPort-like solution of mixing A/V and data across the USB Type-C connector. This included using USB power in order to bring the best of all worlds: high-speed data, high-quality A/V and power over one connector and cable. To increase the fun, these standards bodies released new versions of their standards, increasing the bandwidth for USB to 10Gbps and DisplayPort to 8.1Gbps. VESA then released the DisplayPort Alt Mode on USB Type-C standard version 1.0.

What makes DisplayPort the video solution of choice is its flexibility and bandwidth. It can transmit A/V across one, two or four lanes. This allows the support of 1080p across one lane and new 5K monitor across four lanes. Since 2010, DisplayPort has supported 4k2kp60 resolutions. 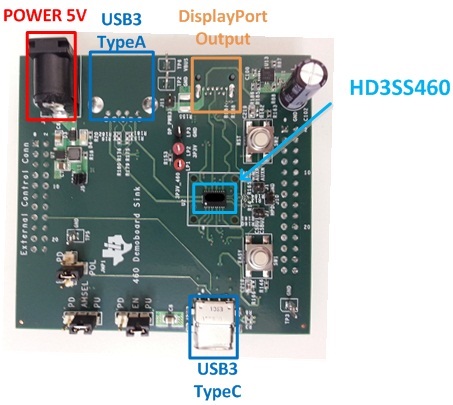 The HD3SS460 is the first switch designed specifically for USB Type-C applications. It supports both DFP and UFP applications while enabling DisplayPort over USB Type-C. Combined with a USB Power Delivery (PD) controller, all of the missing pieces come together to provide a data, A/V and power solution that will change the way people use their mobile devices.

In March, VESA held a plug test where companies brought their devices and systems to test with each other. TI brought the HD3SS460 system for testing, with promising results.

TI sees a bright future with the USB Type-C connector and its flexible solution. Expect many new exciting devices from us that push the signal-integrity envelope and enhance the user’s experience. Let us know in the comments section whether you plan on adopting USB Type-C with Alt mode capability or prefer dedicated USB and DisplayPort connections.