Automotive heating, ventilation and air-conditioning systems (HVAC) systems contain multiple flaps, each driven by a corresponding motor. Integrated, multichannel motor drivers give designers the ability to drive multiple motors independently in both directions. Having the ability to drive all motors (also known as flap actuators) from a single device saves not only board space but also cost, albeit introducing challenges.

One design challenge when integrating multiple half bridges in one device is how to handle the thermals of the integrated field-effect transistors (FETs) in the operating ambient temperature range. Driving multiple motors with the least amount of pulse width modulation (PWM) signals is a complex task. There are cases where one of these multichannel devices is not enough to drive all of the HVAC system flaps, and multiple device communication setups are required.

Another design challenge is how to control the movement speed of the flap loads. This speed control is typically achieved using a pulse-width modulation (PWM) drive, which requires the generation of PWM signals within the device.

To solve these challenges, TI created the integrated, multichannel DRV8912-Q1 motor-driver family. These drivers can drive up to six motors simultaneously in both directions or up to 11 motors separately in a single integrated circuit. Figure 1 shows the pinout of the device, highlighting its integration of 12 half-bridge outputs, the use of Serial Peripheral Interface (SPI) communication and no PWM input pins. 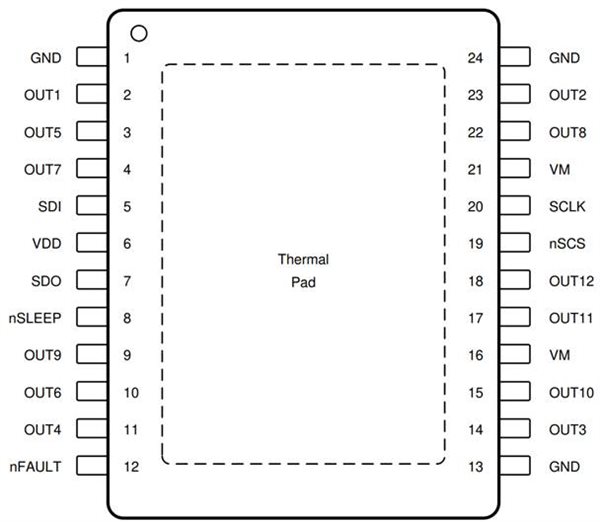 Thermal management, which is managing the die temperature of the device, is one of the biggest challenges with integrated multi-half-bridge drivers. Figure 2 shows the low drain-to-source on-state resistance (RDS[on]) of the integrated FETs in the DRV8912-Q1 motor-driver family across an ambient temperature (TA) and with an operating voltage range from 4.5 V to 32 V. The ability to drive multiple loads while keeping the die temperature below 150°C is essential for a multi-half-bridge device in HVAC systems.

For cars that have multiple HVAC zones and options, there could be a need for multiple devices to drive a large number of flap actuators. This does not mean that you need to increase the number of microcontrollers in your design, however, as the DRV8912-Q1 family does daisy-chain in SPI-based communication. As shown in Figure 3, one microcontroller is a master communication device, and multiple drivers are slaves using a single SPI communication. This feature of the motor driver reduces hardware expenses and overall system size.

Figure 3: MCU to flaps with daisy-chain

Open-load detection (OLD) is a diagnostic feature that determines whether or not there is an open electrical circuit between the HVAC control module and the flap motor. In HVAC systems, disconnected load detection is challenging because the current required to drive the motor changes when the airflow changes. These current changes can cause false open-load faults.

Figure 5: False OLD flag during high-side current recirculation with (a) and without (b) negative-current enabled

HVAC systems vary in complexity and automation level, depending on vehicle class. The DRV8912-Q1 family is pin-to-pin compatible between all devices. With low RDS(on) for thermal performance, SPI daisy-chaining, internal PWM generation and unique open-load detection, the benefits of the DRV8912-Q1 device family for HVAC systems are numerous.