As the world constantly evolves to keep everything and everyone connected, wireless sensors are becoming more and more popular in the Internet of Things (IoT) market. Several definitions for the IoT exist, but one simply defines it as keeping up to date with our surroundings by measuring the environment with remote sensors.

Most IoT applications operate in burst mode, where the system is asleep most of the time. Due to this duty-cycled system behavior, the sleep current becomes extremely important in determining how well the system can conserve battery power and extend the device’s lifetime. In recent years, technological improvements have led to a drastic reduction in system sleep current to only a few tens of nanoamperes, but there’s much more potential to drive system power even lower.

A low-power system timer could be especially beneficial for duty-cycled or battery-powered applications like those you’ll find in IoT applications. That’s why TI introduced the TPL5110 and TPL5010 low-power system timers. Normally in such systems, the microcontroller’s internal timer is used to duty-cycle the system; however, even in low-power or sleep mode, the microcontroller (MCU) can still use several microamperes.

Consuming only 35 nA, the new timers can interrupt the system periodically, drastically reducing the overall system standby current during sleep (Figure 2). Such power savings enable the use of significantly smaller batteries, making them applicable for energy-harvesting or wireless-sensor applications. The timers provide selectable timing intervals from 100 ms to 7200 s and are designed for duty-cycled applications. 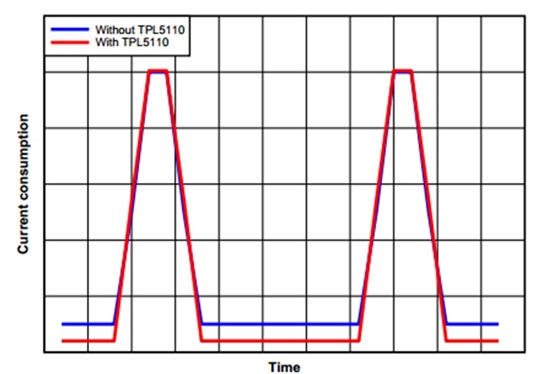 The TPL5010 operates by sending a wake-up signal to the MCU during every programmable delay period (Figure 3). When an MCU works in conjunction with the TPL5010, it can operate in an even lower-powered sleep mode by turning off its internal timer. In addition, an integrated watchdog function constantly checks the system’s MCU ensures high reliability. (For more about this watchdog function, check out the datasheet.)

The TPL5110, on the other hand, operates by driving an external metal-oxide semiconductor field-effect transistor (MOSFET) to power-gate the system’s supply for even greater power savings. In addition to this normal duty-cycled timing function, the TPL5110 can operate in “one-shot” mode. In one-shot mode, the timer can drive the MOSFET for a single cycle. Coupled with a manual-reset functionality, these two features make the TPL5110 a small and low-cost solution ideal for any simple power-on applications without the need for an MCU.

Let’s take a look at a brief application example.

In the case of an application where humidity and temperature sensors are being used to monitor the environment, measurements are normally taken once per minute. This means that the duty cycle will be active for approximately 1 s and in off or sleep mode for 59 s. Now normally, an MCU can control the system timing; but if the MCU's sleep current is 120 μA, the system will be burning excess current. With the TPL5110, you are only operating at 35 nA in off mode, which is almost 3,500 times less.