HDMI 2.0: How to generate cleaner signals over long traces, connectors and cables

Signals that traverse through transmission media are subject to the effects of noise, distortion and signal loss. While you can typically preserve signal integrity and fidelity at low bit rates and enable longer distances, DisplayPort and high-definition multimedia interface (HDMI®) multi-gigabit signals usually experience significant signal-integrity degradation when signals traverse through long traces across connectors or over long cables. These long lengths could result in reduced signal strength, distorted or noisy signals at the receiving end, or the signal failing to comply with standards.

By using retimers and redrivers in DisplayPort or HDMI interfaces, video systems can maintain signal integrity over long traces or cables with improved signal quality. This facilitates design flexibility by extending the distance through which a signal can travel across cables or traces. Retimers and redrivers also enable a broad range of interoperability, improve system performance, and help systems comply with standards-driven requirements.

The most common usage for retimers and redrivers is on the video source side in notebooks, desktops, gaming systems and DVD players, where the devices sit between the video output from the system-on-chip (SoC) or graphics processing unit (GPU) and the HDMI connector, before the retimers or redrivers transmit the video signal through the HDMI cable to the monitor, HDTV, etc. Figure 1 shows the use of a retimer in a video source side system design.

Figure 1: Retimer used on the video source side

Another area where retimers and redrivers can benefit systems is in video distribution, where an SoC or field-programmable-gate-array (FPGA) may output different video channels. The designer can embed a retimer or redriver in each channel before they transmit the signal into the HDMI connector, as shown in Figure 2. 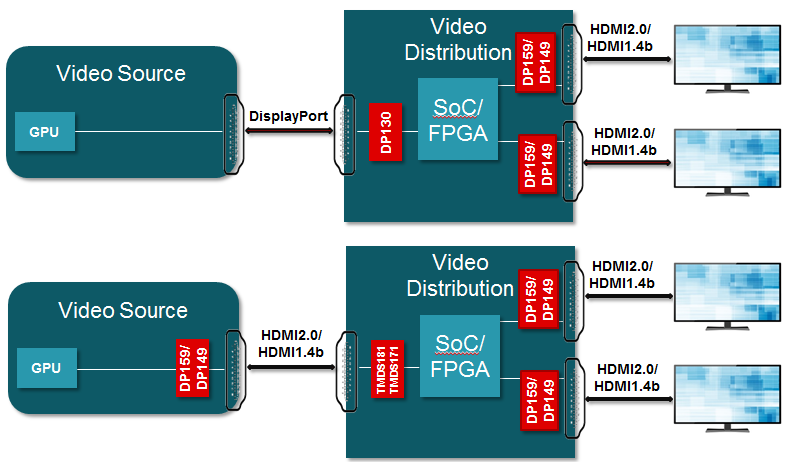 Devices like the SNx5DP159 and SNx5DP149 high-performance dual-mode DisplayPort or transition-minimized differential signaling (TMDS)-to-HDMI retimers provide a system’s signal-conditioning needs. Let me give you two specific examples of how retimers can help increase signal integrity in video display system designs.

In a dual-mode DisplayPort to HDMI dongle, DP159/DP149 retimers improve signal quality, as illustrated in Figure 3.

Figure 3: The DP159/DP149 retimers used in a video DisplayPort-to-HDMI dongle

In addition to the video system applications I’ve mentioned above, you can use the DP159 and DP149 devices in many other system designs, including desktop PC, laptop, gaming PC, DVD, and AVR applications. What considerations do you face when designing video distribution systems? Log in to post a comment below.