How does a linear resonant actuator work?

Guest blogger Shantanu Balu is the co-founder of Somatic Labs, which created Moment, an innovative wearable that communicates with the user entirely through the sense of touch. 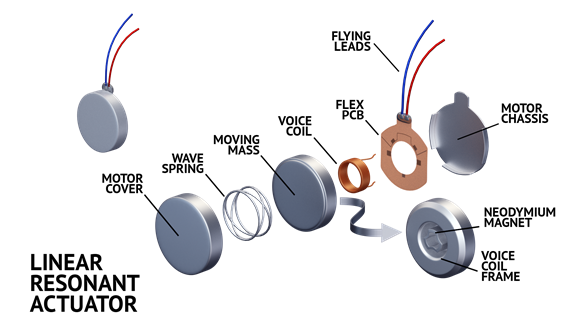 Diagram of the construction of an LRA

The voice coil remains stationary inside the device while it produces a vibration and presses against a moving mass. By driving the magnetic mass up and down against the spring, the LRA as a whole will be displaced and produce a vibration. The underlying mechanism resembles a speaker producing sound. In a speaker, air is funneled through a cone and displaced at different frequencies by turning an AC frequency and amplitude into a vibrational frequency and amplitude. Internally, a speaker accomplishes this task by moving a magnetic mass with a fast-changing alternating current. Unlike a speaker, which can be driven at arbitrary frequencies, an LRA is useful in haptic applications within a specific frequency range.

Rather than directly transferring the force produced by the voice coil to the skin, the device optimizes for power consumption by taking advantage of the resonant frequency of the spring. If the voice coil pushes the magnetic mass against the spring at the spring’s resonant frequency, the device can produce a vibration of higher amplitude more efficiently. Since the voice coil is driven by an AC current, modeling the desired frequency and amplitude of vibration, the frequency and amplitude may be independently modified. This is different than an ERM motor, which couples the two properties of the resulting vibration.

Although the frequency can be changed, the LRA will typically be operated within a narrow frequency range to optimize its power consumption—if the device is driven at the resonant frequency of the spring, it will consume less power to produce a vibration of equal magnitude. Regardless, this improvement alone presents a unique advantage over ERM motors: a precise waveform of varying intensity over time can be reproduced in an LRA with a fixed frequency, whereas a waveform of varying intensity in an ERM motor will also produce a varying frequency of vibration.

The typical start time for an LRA is approximately 10ms, a fraction of the time required to produce a vibration with an ERM motor. This incredible speed results from the immediate movement of the magnetic mass as current is applied to the voice coil inside of the device. In an ERM motor, the vibration can only be produced after the motor reaches its operating speed—even when overdriving the motor to produce faster acceleration, the motor can require 20-50ms before reaching a desired intensity of vibration. Unfortunately, the stop time of an LRA can be significantly longer than an ERM motor. An LRA can take up to 300 ms to stop vibrating due to the continued storage of kinetic energy in the internal spring during operation. Thankfully, an active braking mechanism can also be used for an LRA—by performing an 180-degree phase shift of the AC signal provided to the actuator, the vibration can be stopped very quickly (within approximately 10ms) by producing a force opposite to the oscillation of the spring.

Many modern cell phones use an LRA instead of other types of vibration motors in order to produce a wider range of vibrotactile effects with less power. Other consumer electronics like video game controllers also make use of linear resonant actuators to provide trackpads with haptic feedback. 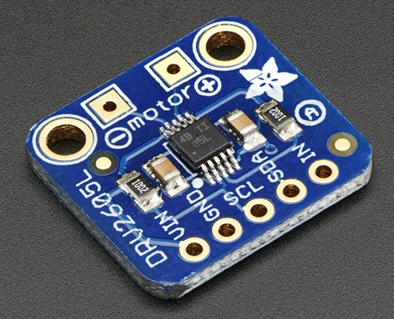 The DRV2605 Breakout Board from Adafruit

Adafruit Industries sells the DRV2605 breakout board with headers suitable for a breadboard prototype of a device using an LRA. The aforementioned breakout board can be easily integrated with any electronics prototyping platform. You can also find other variations of the breakout board online.

An off-the-shelf chip can simplify the development process for some applications. Haptics drivers like the DRV2605 and DRV2625 from TI can drive LRAs in addition to ERM motors. While we were designing Moment, a wearable device with rich haptic feedback, we used the DRV2605 to provide immersive tactile effects across four linear resonant actuators.

Moment turns uses precisely-timed haptic effects to create the sensation of motion across the skin. This provides a unique opportunity for creating tactile representations of information – for example, the built-in tactile compass allows a user to always feel the location of true North. Moment also comes with a timer that turns the passage of time into a sensation moving across a user’s wrist, heightening their awareness of how much time they are spending on different tasks. The DRV2605 allowed us to quickly prototype our device and develop these unique applications without worrying about the complexity of driving the LRAs.

Since the DRV2605 simplifies the process of driving an LRA at its correct resonant frequency, we were able to iterate more quickly on other parts of our hardware design. Further, the implementation of the DRV2605 into a circuit with a microcontroller is straightforward through its I2C interface while the footprint is minimal, requiring only a decoupling capacitor in addition to the driver chip. Selecting an LRA for your design may also help increase precision and longevity.

Although linear resonant actuators can seem difficult to implement in a custom design, a haptics driver chip like TI’s DRV2605 can simplify the process, improve performance and reduce overall power consumption.

TI’s drivers are designed to drive haptic actuators, simplifying the design process by eliminating unnecessary functions and their software controls. There are several features included to improve performance and simplify design. For example, automatic closed-loop feedback improves response from ERMs and LRAs. Automatic calibration detects and configures the closed loop feedback coefficients for every actuator, and auto-resonance detection senses the resonant frequency of LRAs.

LRAs make for a better overall haptic experience because they can be customized to the user’s needs. They continue to evolve, reducing power consumption and board footprint while producing even sharper, stronger tactile effects.

As we rely more on electronic user interfaces, we will need tactile feedback to help us understand what systems are doing. Haptic technology not only makes our experiences more satisfying, it also helps improve control, extends functionality and enhances safety for system users, while helping manufacturers differentiate their products.