In my last blog post, “Three things you should know about Ethernet PHYs,” I discussed the evolution of Ethernet and the most essential information about the Ethernet physical layer transceiver (PHY). In this post, I’ll pick up where I left off and discuss how Ethernet PHYs are shifting modern markets.

Ethernet was invented over 40 years ago. Fast-forward through the standardization of IEEE 802.3 (10Mbps Ethernet PHYs) and into the world of 1995 – the era of “fast Ethernet,” where nominal data rates could reach up to 100Mbps. As part of this technological boom, National Semiconductor invented the industry’s first 10/100Mbps Ethernet PHY, a speed that’s still used predominantly even in today’s modern markets. What was even more impressive was the fact that National included a feature called auto-negotiation, which allowed the Ethernet PHY to operate at 10Mbps or 100Mbps without the need for human intervention. Both of these facets were considered a massive reinvention for Ethernet technology. As a result, new markets began emerging for the Ethernet PHY. 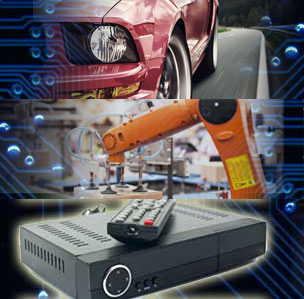 In today’s markets, Ethernet technology is drastically changing the dynamics of how we efficiently transfer data. Ethernet PHYs are integrated into everything from automotive diagnostics to robotic assembly lines to set-top boxes, as shown in Figure 1. Ethernet PHYs are evolving to meet market demand due to three main factors:

Today’s technological applications require electronics to provide a more real-time response. An Ethernet PHY architected and designed for such applications can provide improved link times and low latency. You can find an example of why low deterministic latency is important in a robotics assembly line. Robots need to be timed extremely precisely in order to optimize assembly time and reduce defects. If the Ethernet PHY did not have low deterministic latency, the processor would have to increase the delay between each action the robot takes. Multiplied hundreds or thousands of times, such delays would drastically increase assembly time and reduce throughput.

Robustness and reliability against external factors

Since Ethernet is a widely adopted and known standard, it is a cost-effective way to reliably transfer data quickly through a dedicated medium. This, along with Ethernet’s ease of use, has led to commercial products offering Ethernet connections such as set-top boxes, network printers and smart TVs.

In the meantime, where do you see Ethernet technology going in the next 10 years? Share your vision in the comments below.