How much loading can an auto-polarity RS-485 bus support?

The RS-485 interface is popular because of its robustness; the use of differential signaling effectively rejects common-mode noise on the bus. To make the communication work, the transceiver and receiver have to match the pins: A to A and B to B. In some RS-485 applications, however, the bus polarity information might not be available on the receiver ends or the polarity could be mistaken.

Auto-polarity RS-485 transceivers like the SN65HVD888 and THVD1505 can detect the bus polarity automatically so that the two bus wires can be connected during installation either way. For example, the A pin of the device can be connected to any one of the two bus wires and B pin can be connected to the other wire. Using this configuration reduces costs and helps increase system reliability. The bus polarity feature could be beneficial for systems with high installation rates, such as IP cameras, E-meter, air conditioning and lighting. In the event that the RS-485 connection is installed backwards, the device can self correct the polarity instead of requiring an installation team to revisit the site and correct the error.

The mechanism of auto-polarity detection relies on generating enough voltage difference on the idle bus in the system using bias resistors, RFS and RT2, shown in Figure 1. 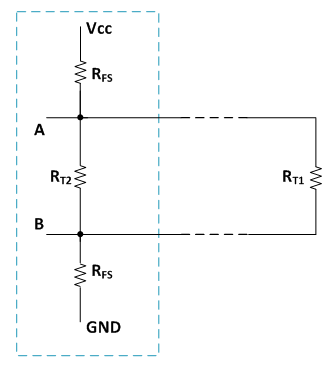 Because designing this bias (fail-safe) network is sometimes not as straightforward as it looks, in this post I’ll apply two equations to make the calculations. After the resistor values are fixed, I will show the network’s impact on the loading condition of the system.

To design a proper fail-safe network, you need to meet two fundamental conditions. First, the equivalent resistance of the network, RFS and RT2, needs to be equal to the characteristic impedance of the cabling. In this setup, this value is presented by the termination resistor value of the bus, RT1. Secondly, the voltage generated on the idle bus should be bigger than the input threshold voltage, Vit, of the receiver. Provided with the first condition, the voltage drop on RT2 from the network itself should be twice the voltage required. In other words, the calculation is only based on the resistors in the dotted blue box of Figure 1, excluding RT1.

From the first condition, you can redraw the network by connecting the virtual ground, Vcc and GND, of RFS together (Figure 2). 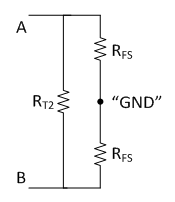 By doing this, you can easily calculate the equivalent resistance using Equation 1:

From the second condition, suppose that the minimum Vcc is 4.5 V and Vit is 100 mV. You can also include 50 mV of noise margin on top of Vit (Equation 2):

Now that you have two equations with two variables, you can put them together using Equation 3:

After you have obtained all resistor values, you can evaluate their impact on the system. In the RS-485 standard, 375 Ω represents the maximum loading of the bus (RINEQ in Figure 3), or (1/375) S in conductance. Assume the bus voltage is 1 V. This means that the most leakage current the bus can take is about 2.67 mA single-ended. 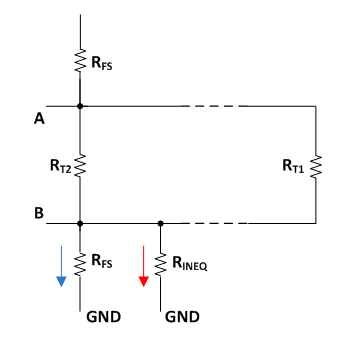 A proper fail-safe network for SN65HVD888 shows that the bus can support up to 149 1/8UL nodes with the network.