How to HART-enable your analog input module

The Internet of things (IoT) has implications for Industry 4.0, motivating smart sensor transmitters and similarly capable programmable logic controller (PLC) analog input modules. A previous blog post illustrated how to achieve digital communication by integrating the Highway Addressable Remote Transducer (HART) protocol into a sensor transmitter design. But that’s only half the story. At the other end of the current loop sits the analog input module, which must convert the analog current and HART signals into digital data for processing.

To summarize the previous post, a HART modem couples a frequency-shift keying (FSK) current or voltage signal onto the current loop in a field transmitter. The primary variable (PV) is represented by the DC current value and other data is transferred by the AC FSK waveform. The question is, how do you separate and digitize these signals at the receiver end? 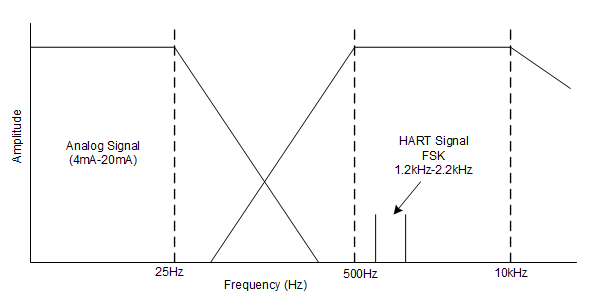 Now, you just need a circuit to perform the filtering and convert the signals into the digital domain. Figure 2 shows a HART-enabled 2-wire analog input module schematic. The input module uses the DAC8740H HART modem to demodulate the FSK signal and the ADS8689 to digitize the primary variable. 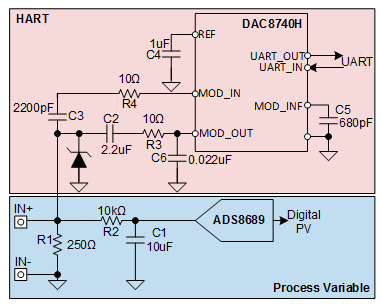 Let’s look at how the process variable is captured in this circuit. R1 is the load resistor used to measure the current in the loop. The signal is filtered by a resistor-capacitor (RC) low-pass filter with a very low cut-off frequency. This ensures complete attenuation of the AC HART signal, leaving only the process variable. An analog-to-digital converter (ADC) like the ADS8689 then digitizes the shunt voltage and calculates the current in the loop using Equation 1:

The denoted HART portion of the circuit consists of the DAC8740H HART modem, with input and output pins AC-coupled to the high side of the load resistor. The DAC8740H’s input (MOD_IN) demodulates the received FSK signal and the output (MOD_OUT) modulates an FSK signal to communicate with the field transmitter. Designers often mistakenly think that a current waveform is used for bidirectional communication in HART, but the field transmitter is regulating the loop current and the input module has no control over the current. Instead, the input module uses a voltage waveform to communicate back to the field transmitter. Since HART is half-duplex, both the input and output can couple to the same node.

You can achieve additional filtering of the HART signal within the DAC8740H to isolate the signal before demodulating. The device contains an internal fourth-order bandpass filter that is enabled by connecting a 680pF capacitor to MOD_INF.

Now you know how to achieve two-way HART communication through the analog input module. For more information about HART, 2-wire sensor transmitters and the devices mentioned in this post, see the links below.