How to reduce jitter and improve signal integrity in source and sink system designs supporting HDMI 2.0

As graphic processing units (GPUs) and other system-on-chip (SoC) devices migrate to lower-geometry complementary metal-oxide semiconductor (CMOS) processes, the distance between these SoC devices and high-definition multimedia interface (HDMI®) connectors has made it difficult to pass HDMI compliance. The increase in data rate from 3.4 Gbps to 6 Gbps for HDMI 2.0 applications has also added additional complexity.

Signal conditioners like redrivers and retimers implement several features to improve signal integrity. They can support adaptive (retimer) or fixed (redriver) equalization to clean up intersymbol-interference jitter or loss from bandwidth-limited board traces to cables. Retimers use clock data-recovery circuits (CDRs) to clean up random, phase and sinusoidal jitter. High-performance retimers have wide-band CDR tracking and narrowband jitter cleaning, as well as the capability to work with a wide frequency range. They enable signal recreation without expensive external components and you can forward the recovered clock to the sink. The transmitter provides several features to help designers pass compliance and reduce system-level design issues like de-emphasis, which compensates for the attenuation when driving long cables or high-loss board traces.

Both the HDMI source and sink sides can use retimers and redrivers to clean up the signal. An example of an HDMI source is a PC graphic card. Figure 1 illustrates how the GPU outputs the HDMI signal far away from the HDMI connector, which is the source compliance point. In many cases, the distance is 11 plus inches of printed circuit board trace, which can add a significant amount of ISI jitter causing the system to fail the voltage swing. This loss can be as much as 12dB and 6 Gbps depending upon the care taken designing the board. If there is random noise or other types of deterministic jitter a retimer may be needed to pass compliance.

The sink-side example is a high-definition television (HDTV), where you can place a retimer or redriver after the HDMI connector and before the signal receiver for display processing. 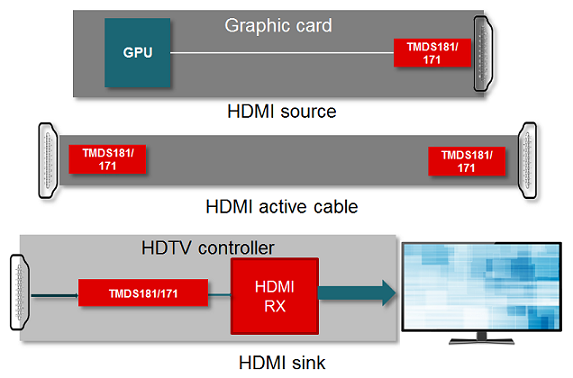 Audio video recorders (AVRs) and Blu-ray DVD players, as shown in figure 2, are examples of applications where the equipment is in the middle of the sink and source infrastructure. In this instance, it has to compensate for the same losses that the source and sink applications in figure 1 have and thus a retimer or redriver may be needed at both the receive and transmit sides. The DVD is misleading as most would consider it a source but other sources can be driven into the DVD player as well. 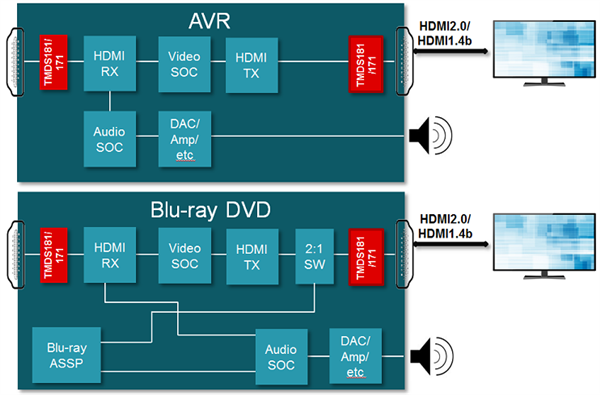 Figure 2: Retimers and redrivers used in AVR and DVD systems 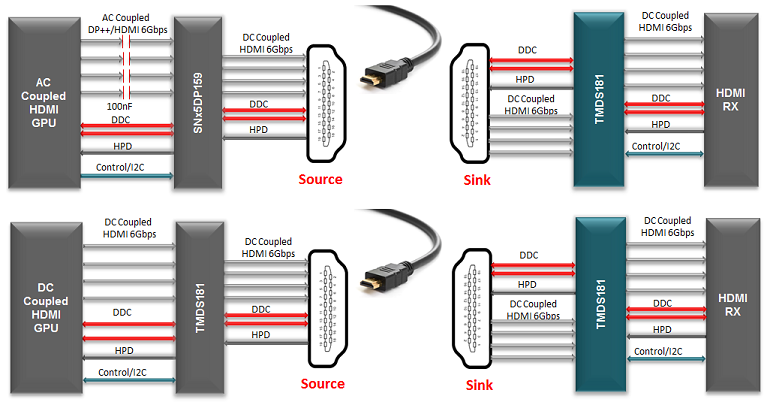 As can be seen from the above applications there are many ways to fail compliance and negatively impact the end users experience. As the market continues to evolve and audio visual bandwidth requirements increase, retimers and redrivers become key components in the system designer’s tool box.