How to select a redriver or retimer for HDMI 2.0 jitter cleansing

Signal integrity has always been a priority for high-speed signal interfaces like High-Definition Multimedia Interface (HDMI), which runs at 6Gbps. As the HDMI 2.0 signal travels from a graphics processing unit (GPU), central processing unit (CPU) or Platform Controller Hub (PCH) to an end receiver such as a TV or monitor, several factors can cause jitter on the signal path, resulting in bit error rate (BER) at the receiver and unsatisfying video quality.

There are two different kinds of system jitter: deterministic and random.

To clean up system jitter, correct signal-integrity issues, and reduce or eliminate BER, you can use a signal conditioner such as a redriver or retimer:

For HDMI 2.0 interfaces in PCs, DVD players, gaming devices, set-top boxes or TVs, I would consider using a signal conditioner before HDMI signal transmission out of the system, or at the HDMI receiver to ensure compliance and interoperability.

In video-source applications like DVD players, PCs, notebooks and gaming systems, the majority of jitter is caused by printed circuit board (PCB) trace length insertion loss, which is rather predictable. A redriver is a perfect solution for fixing inter-symbol interference jitter such as from long traces or long cables, because the signal will always attenuate by a certain amount when going through a fixed distance.

If additional jitter becomes prevalent from system layout and thermal noise such that phase and timing distortion occurs in the signal, a retimer will be a better solution because the equalizer and CDR inside the retimer can improve signal strength and correct random jitter.

In a video sink-side application such as a high-definition television (HDTV) and monitor, the receiver will typically face an unpredictable signal input caused by different video sources or HDMI cables of different qualities and length, possibly resulting in random jitter. A retimer is always a safe solution because a good one will have adaptive equalization. It can adjust equalizer settings based on the input signal. CDR inside the retimer can help remove random jitter to ensure signal quality.

You could also use a redriver in the sink side if the system setup is rather fixed, and the main input jitter is caused by insertion loss. You can correct this by amplifying the signal through equalization.

Another aspect to keep in mind is that because a retimer has more functionality than a redriver, a retimer can solve the majority of jitter issues in a system, resulting a better performance (with the trade-off of higher cost and higher power consumption).

Texas Instruments has scalable redriver and retimer solutions to address HDMI 2.0 signal-integrity challenges. The TDP158 is a 6Gbps AC-coupled transition-minimized differential signaling (TMDS) to HDMI 2.0 level shifter and redriver, while the SN65DP159 is a 6Gbps AC-coupled TMDS-to-HDMI 2.0 level shifter and retimer. Both devices are pin-to-pin compatible to enable flexible design choices.  For example Figure 1 shows in notebook PC, you can place either TDP158 or SN65DP159 at the HDMI connector based on system design needs to ensure HDMI2.0 signal output quality. 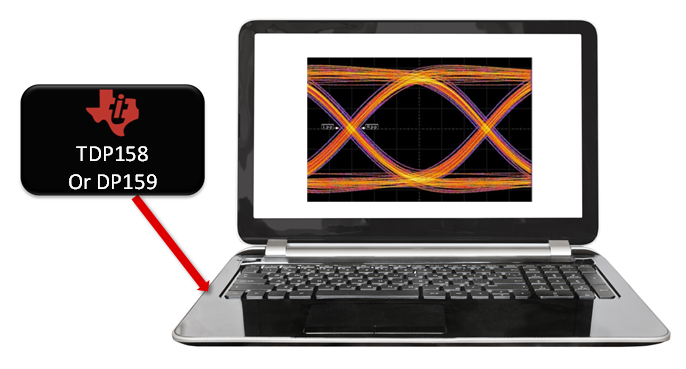 The TDP158 is a cost-effective and power-efficient solution that provides programmable equalization up to 15dB; additionally, it has transmit swing, pre-emphasis and slew-rate control for fine-tuning system performance. The SN65DP159 retimer supports both fixed and adaptive receiver equalization. Using adaptive equalization, the gain will adjust automatically based on the input signal to compensate for variable trace or cable loss. The CDR inside the SN65DP159 can clean up random jitter to deliver a clean signal downstream and help pass system compliance.

By selecting the right redriver or retimer for the HDMI 2.0 interface, you can achieve optimal system performance with the widest interoperability.