How to select the right retimer for HDMI 2.0 applications

High-Definition Multimedia Interface (HDMI) is a popular video interface that uses transition minimized differential signaling (TMDS) as the main communication channel. Each TMDS data lane can support up to 6 Gbps for HDMI 2.0 channels, which is important in maintaining signal integrity over transmission media. This can be quite challenging since the high speed signal suffers loss automatically while transmitting in the data path.

Let’s review the types of signal-integrity degradation that may occur when HDMI signals pass through traces, connectors and cables:

Techniques designed to combat these signal-integrity challenges include equalization and clock-data recovery (CDR). An equalizer makes sure that the transmission channel can achieve an equalized frequency response for all frequency components, reducing signal distortion and boosting signal strength. CDR recovers the clock from incoming data and regenerates clean signals, which in turn reduce signal noise and jitter. A retimer is a mixed-signal component that integrates an equalizer and CDR.

A good signal conditioner can support adaptive or fixed equalization to clean up ISI or loss from bandwidth-limited boards and cables. Retimers use CDR circuits to clean up random, phase and sinusoidal jitter. Good retimers have wideband CDR tracking and narrowband jitter cleansing, as well as the capability to work in a wide frequency range. Additionally, a good retimer has selectable source termination to match traces and impedance to reduce reflections in the signal path. A good retimer will also provide several features for passing HDMI 2.0 compliance and reducing system-level design issues, which compensates for the attenuation that occurs when driving long cables or high-loss board traces.

The SN65DP159 is a dual-mode DisplayPort or AC-coupled TMDS-to-HDMI 2.0 retimer supporting all of the features I’ve described. The SN65DP149 is a retimer also contains the same features and supports HDMI 1.4b. Both handle AC-coupled-to-DC-coupled physical layer conversion and are pin-to-pin compatible. Figure 1 is the block diagram. 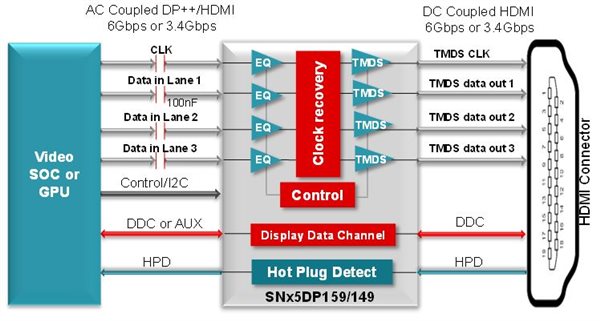 If the input is DC-coupled TMDS data, TI’s TMDS181 or TMDS171 retimers can be selected for HDMI-to-HDMI support for applications up to 6 Gbps, such as high-definition TV. You should place the retimer at the HDMI connector to compensate for any signal noise propagated into the TV receiver. Figure 2 shows the block diagram. 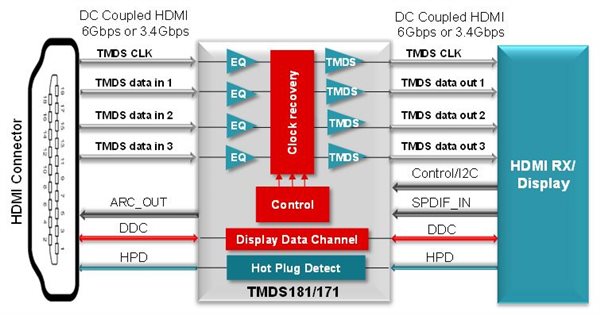 By using the right retimer in your video system, you can enable cleaner signals and a true 4K experience.