How to shift your automotive design to another level

Temperature, pressure, radar, cameras, ultrasonics – these are just a few of the sensors used in modern automobiles. Inside the car, you’ll find other complicated systems such as audio, video, gauges and the control unit. Every year more and more systems are added to our vehicles, and many of them need to communicate to work properly. There are times when they don’t exactly speak the same language, however, so a translator is required.

In the world of analog logic, “not the same language” translates to “different maximum voltages.” There are a number of ways you can get systems operating at different logic voltage levels to talk. However, many of them require an extra bit to control direction, or they only operate in one direction. The LSF0108-Q1 is an automotive-qualified bidirectional translator that can operate over a wide variety of voltages without the need for a direction pin. In this post, I’ll discuss the requirements involved with using the LSF0108-Q1 to translate three separate hypothetical signal buses: an I2C bus, secure digital (SD) card and custom field-programmable gate array (FPGA). Figure 1 is a graphical representation of the final circuit.

Figure 1: Schematic diagram for using the LSF0108-Q1 to translate three separate buses; because of the push-pull outputs and low-input leakage currents, pull-up resistors are only located on the high side of each channel

The first pair of signals is for the low-speed I2C bus, converted from the system’s 2.5V primary voltage to the device’s 5V logic level. The next four wires are for the SD card, converting from 2.5V to 3.3V at a much higher speed of 50MHz, which requires a lower pull-up resistance than the other channels (maximum 400Ω). The last two wires are for down-translation from a different controller on the same board operating at 3.3V to 1.8V for the FPGA. The pull-up resistors are all placed on the high side of the translator for each channel. I chose values based on load capacitance and desired frequency ().

Table 1 summarizes this information. For more on how I did this, see the application note, “Voltage-Level Translation With the LSF Family.”

Table 1 – Summary of signals to be translated

The LSF0108-Q1 is capable of translating multiple voltages because it uses a passive translation system, which basically acts like a voltage-controlled switch. When the input voltage is below a certain threshold voltage, the switch is closed and the output is driven low by the input device. When the input voltage is above the threshold voltage, the switch is open and the output is in a high impedance state. At that point, a pull-up resistor takes over and drives the output line to the desired voltage. The VrefA, VrefB and EN pins on the device control the threshold voltage. Figure 2 shows the current flow in different switch states. 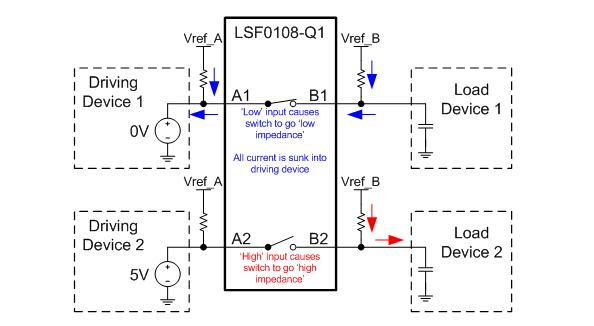 Today I showed how to use the LSF0108-Q1 to translate signals for three separate busses that all needed different translation voltages – something that would usually require at least three different parts. I also broke down the operation of the device to a very simple level because I know it can be confusing even to those that have used it before.

Given the large number of systems that have to work together in modern vehicles, voltage translation is an integral building block to get devices talking to one another. Whether it is controllers or peripheral systems that need to communicate, the LSF0108-Q1 will help you shift your logic levels to where they should be. What’s your experience designing with bidirectional translators? Login and leave a comment below.