How ultrasonic technology improves convenience and performance in home automation

Homeowners are becoming more interested in automating the control of lights, fans, thermostats, TVs, music equipment, garage doors, doorbells and much more, leading to a growing trend of bringing commercial building automation technologies home. Amazon Alexa, Google Home, Apple HomePod and HomeKit, Wink, and a multitude of other central hubs control and monitor various electrical/electronic devices in a home, as shown in Figure 1.

The challenge with home automation is that this technology is in the early stages of evolution; thus, some central hubs work effectively and some do not. Home automation central hub and device manufacturers are continuously innovating to improve performance and enhance convenience, while also seeking to reduce energy consumption.

What most products need is a way to detect the early presence or approach of people nearby, while otherwise remaining in sleep mode and conserving power. Upon detection, these devices automatically wake up and perform key functions, like turning lights on or off; adjusting heating, ventilation and air-conditioning (HVAC) system settings; turning on electronic doorbells before they’re pressed and notifying homeowners (or recording video); or activating burglar alarms.

You might be asking yourself, “Why should I choose ultrasonic sensing for presence or motion detection over the more popular PIR sensors?” PIR sensors work on the principle of changes in temperature taking place in front of the sensor, but that means that insects or small animals can trigger them. Direct white light on a sensor can also momentarily “blind” it and trigger false alerts. Camera systems detect a change in images between frames to register motion, but again, insects or birds can trigger these systems; so can the movement of leaves and plants in view of the camera. Ultrasonic sensing is not susceptible to such false alarms as it is based on the principle of motion or presence of a target obstructing the transmitted sound waves and generating echoes that bounce back to the sensor. The strength of the echoes as a result of the presence of humans is different compared to insects or pets and the system can be programmed to detect the right kind of targets.

Although multiple sensing technologies can detect the presence or approach of people, including optical time of flight and capacitive sensing; ultrasonic sensing is one of the lowest-cost and most versatile technologies. While currently used extensively in automotive park-assist systems for obstruction/presence detection, you can also leverage ultrasonic sensing in central hubs, occupancy detection and advanced motion detectors.

In many scenarios, the advantages of ultrasonic technology are not just cost, but performance as well. It works in different mediums, like air, water and gas. It can detect objects regardless of shape, size, color or surface contour. Like radar, it can create 3-D images of objects that enable systems to make better decisions, such as distinguishing between a house pet or a human. Finally, ultrasonic technology has a competitive price-to-feature benefit in end products.

The integration of an ultrasonic sensing-based presence detection subsystem into a home automation device will have an ultrasonic transducer directed in a specific direction or broadcast in a wide (90-135 degree) arc to detect an approaching person. Additional transducers can increase coverage to 360 degrees. Upon the detection of a presence from reflected ultrasonic waves, the output of this subsystem activates the device accordingly; for example, turning on the camera feature in a video doorbell or surveillance camera.

In systems like smart speakers, ultrasonic-based presence detection can turn on the specific microphones that are facing the approaching person, improving system accuracy. In other examples, an ultrasonic subsystem can turn on lighting or air conditioning in rooms upon the detection of humans and even replace the motion detectors used in home security systems.

Presence detection is, of course, not limited to home automation; it’s extendable to building automation as well. One fast-growing application is open parking-spot detection in garages at airports, malls and other commercial facilities. In this use case, an ultrasonic module placed above the parking spot or embedded in the ground detects the presence of a vehicle. Green or red lights mounted to the ceiling notify drivers whether the spot is open or occupied. An example module is shown in Figure 2 below which includes the PGA450-Q1 ultrasonic system on chip (SoC) interface IC and an ultrasonic transducer in a small form factor. 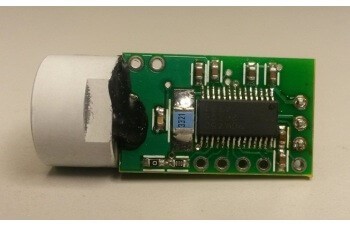 Depending on the design requirements and associated costs, the parking-spot detector module can be wired or wireless. For a wired system, you only need a module similar to the reference design in Figure 2,  modified to include two light-emitting diode (LED) lights. Or, to avoid having cabling along the ceiling of the parking garage, you could opt for a wireless mesh network using one of many wireless standards such as Bluetooth®, Wi-Fi®, or Zigbee.

It’s possible to implement presence detection in many ways, but in my opinion the most cost-effective approach with the least amount of false alerts is an ultrasonic-based approach.