The importance of automotive Ethernet standards

These amendments are important because they incorporated additional requirements and features specific to automotive that have been enabled the explosion of in-vehicle infotainment, advanced driver assistance systems, on-board diagnostics and connectivity to the outside world (5G, V2X).

The amendments primarily address the physical layer (PHY). The affected PHY interface is the electrical interface to the network, also known as the medium dependent interface (MDI). One of the key aspects of automotive-unique PHY specifications is MDI signaling, which addresses (EMI)/electromagnetic compatibility (EMC) and enables the use of unshielded single twisted-pair cabling on the network. This reduces cabling weight and cost – important factors in automotive.

The adoption of a switched network approach to in-vehicle communications brings many of the same constraints imposed on previous shared bus topologies, such as reliability, EMI/EMC, compliance with electrical interface specifications and functional compliance. The latter two items affect interoperability with other devices connected to the network. The number of network-connected in-vehicle sensors is growing and may be acquired from different suppliers, each using a different PHY (see Figure 1). 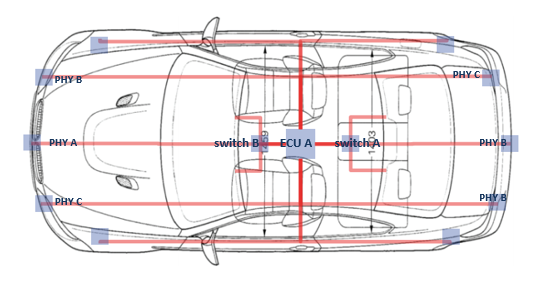 Early on, several members of the automotive industry recognized the need to establish formal collaboration to address EMC/EMI and interoperability issues. The One-Pair Ether-Net (OPEN) Alliance (OA) special interest group (SIG) was established in 2011 and now includes over 300 members, including OEMs, suppliers and technology providers. The OA has guided both the development of the automotive-oriented amendments to Ethernet standards as well as PHY-oriented compliance test specifications to ensure threshold functionality and performance across components from different vendors, enabling the necessary reliability and ease of system integration that the automotive industry requires.

Collectively known as interoperability and compliance tests for 100BASE-T1 PHYs, these test specifications were developed by OA Technical Committee No. 1 (TC1). Together, they constitute the primary compliance tests technology suppliers must pass in order to demonstrate the threshold capability and performance that the standards require. They also give OEMs and suppliers tools for comparing PHYs.

TC1 commissioned a trio of independent labs to provide test services for the industry, each addressing one of the three domains. As a member of the OA, TI participates in this testing. For example, TI’s DP83TC811R-Q1 and DP83TC811S-Q1 have successfully passed each of the compliance tests at the independent labs, including interoperability. Interoperability testing assesses the device under test’s (DUT) compatibility with other link partners (LPs) under various operating scenarios, where the DUT may assume either a master or slave role in the system.