Surgical drills are controlled either by a trigger, similar to the control on a power drill, or a foot pedal. In the past, most surgical drills used mechanical triggers. But because of their contact-based operation, these devices can wear out over time; as a result, the accuracy of the speed control can decline.

The input user interface subsystems of the surgical drill block diagram shown in Figure 1 represent the trigger for speed control and other user-initiated functionalities. In a contactless trigger design, Hall-effect sensors measure the linear displacement of the trigger to help control the drill speed, while inductive sensors create hermetically sealed touch-button controls that can indicate whether the drill is properly gripped when in operation.

Let’s discuss how to implement a contactless, variable-speed trigger with a single-axis (one-dimensional) linear Hall-effect sensor with an analog output. Outputting a varying voltage that depends on how far the trigger is pressed enables more accurate speed control compared to a mechanical trigger that uses a potentiometer to translate the displacement position of the trigger to an output voltage that adjusts its speed based on pre-set speed settings. Potentiometers rely on contact-based operation and typically wear down faster than noncontact-based alternatives, especially if the potentiometer is exposed to vibrations or other environmental factors such as moisture and debris. This approach reduces wear and tear compared to traditional mechanical-based triggers and is possible for both trigger- and pedal-controlled drills.

Another benefit of using a contactless trigger design, is the option to use low-power Hall-effect switches along with a load switch to keep the system in a low-power standby mode when not pressed. As outlined in the Contactless Hall-Effect Variable-Speed Trigger Reference Design with External Field Protection, you can also implement an optional magnetic field protection feature to prevent external magnetic fields from influencing the speed control. Figure 2 shows an implementation of this reference design in 3D-printed mechanical housing to create a complete contactless trigger system. 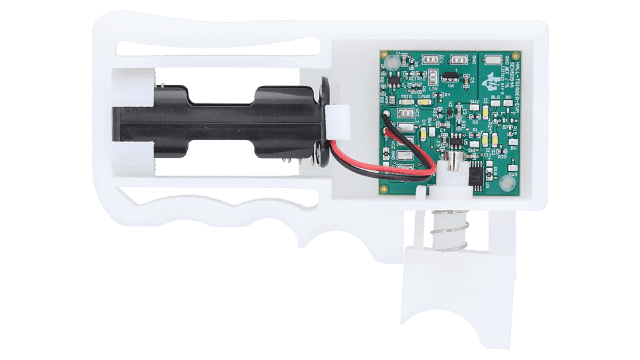 In addition to reliable and accurate operation, enhanced safety features are also a consideration when designing surgical drills. Since traditional surgical drills are mechanically controlled, the drill could be unintentionally enabled by accidentally stepping on the pedal or pressing the trigger. Placing a guard around the trigger or pedal can help to avoid accidental operation, but does not provide protection electronically.

Inductive sensors can help solve this challenge by implementing safety features designed to prevent unintentional operation of the equipment. Figure 3 shows an example of the placement of sensor coils on either side of the handle to detect whether the user is properly gripping the drill; If not, the drill will not turn on. This approach is effective for both foot-pedal and trigger-operated drills. 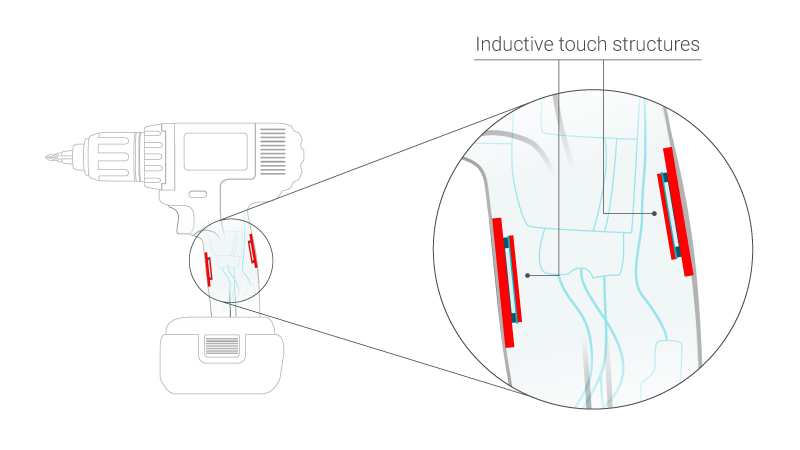 It is also possible to use inductive sensors for touch buttons on the drill to control settings and features, such as the direction of the motor. Some inductive sensors, such as TI’s LDC3114, have an integrated button algorithm or allow access to raw data representing the measured inductance value, which provides flexibility for how to use the device. This raw data can differentiate between a normal button push and a press and hold or force touch action, facilitating the ability for a single button to support multiple actions that could be used for device feature selection, instead of just supporting a binary output. For example, a regular button press could put the drill into oscillation mode while pressing and holding the button could put the drill into a slow-motion mode.

Unlike mechanical buttons that require cutouts that are difficult to seal, you can place inductive sensors behind flat surfaces that can be hermetically sealed, such as a sheet of metal or plastic, making sterilization easier between uses than traditional mechanical buttons. Using an inductive sensing touch button provides a more reliable solution that uses the slight deflection of the flat surface being pressed to determine a button press instead of relying on a mechanical connection. This approach, as demonstrated in the Inductive Touch and Magnetic Dial Contactless User Interface Reference Design, allows the use of a many as eight touch buttons with gloves, which are commonly present in medical settings, while ignoring environmental factors like debris or damage to the button surface.

Hall-effect and inductive sensors are more reliable for contactless trigger and button designs then traditional contact-based designs because they will be less likely to wear and tear over time due to environmental factors, such as the sterilization process for surgical equipment. Contactless trigger designs do not completely eliminate mechanical elements, such as the spring to give the trigger a resistive feel, but a contactless trigger design minimizes the number of potential points subjected to frequent wear and tear. Using the increased precision and reliability of sensors allows doctors to have more confidence their surgical tools without worrying about accuracy declining over time.