TI’s multichannel inductance-to-digital converters (LDCs) feature an adjustable sensor current-drive to set the optimal sensor amplitude. The optimal current-drive level is sensor-dependent and based on the parallel resistance at resonant frequency, RP. A sensor with a lower RP needs a higher current-drive than one with a higher RP.

The LDC1612, LDC1614, LDC1312 and LDC1314 have a dedicated current-drive control called the IDRIVE. The control is available on each channel individually, and settings go from 16µA (IDRIVE = 0) to 1.56mA (IDRIVE = 31). A higher current increases a sensor’s oscillation amplitude. The preferred IDRIVE setting is the highest value for which VOSC < 1.8VP.

Why is the correct sensor amplitude important?

A sensor oscillation amplitude (VOSC) of 1.2VP to 1.8VP results in the best measurement accuracy. The following conditions could have a negative impact on performance:

It is more important to stay below 1.8VP than it is to stay above 1.2VP. The amplitude decreases as the target moves close to the sensor. To avoid exceeding the upper limit, take the measurement at the maximum target distance of the system. This can be free air if a target is not necessarily present in the system.

Why not use the automatic amplitude setting?

I only recommend the automatic amplitude features for quick prototyping purposes. By enabling RP override (RP_OVERRIDE_EN=1) and disabling auto amplitude correction (AUTO_AMP_DIS=1), the LDC uses the current-drive setting in the IDRIVE register. Manual control ensures that the same IDRIVE setting is used on each channel every time the system powers up, and that the same current-drive is used regardless of target distance.

There are several ways to determine a suitable current-drive level. Using an oscilloscope is usually the most straightforward method, so I will explain that method here.

How to set IDRIVE

You can set the IDRIVE either directly in the DRIVE_CURRENT_CHx registers, or program it in the GUI , as shown in Figure 1. 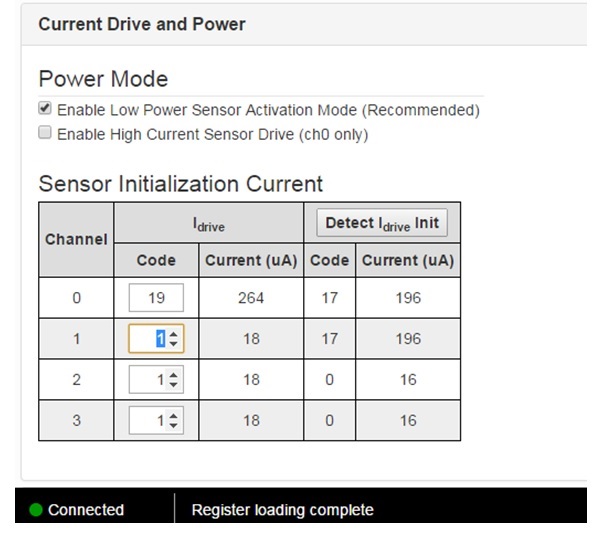 How do I use an oscilloscope to determine the best current-drive?

As an example, I connected a suitable sensor to the EVM and moved the target as far away from the sensor as it will be in the final system. Then, I set the probe to the INAx pin and measured the oscillation voltage with respect to ground.

I started by selecting a very high IDRIVE setting of 25 and measuring the output at the IN0A pin. You can see in Figure 2 that the peak amplitude is 3.3V, which is higher than the 1.8VP recommended limit. 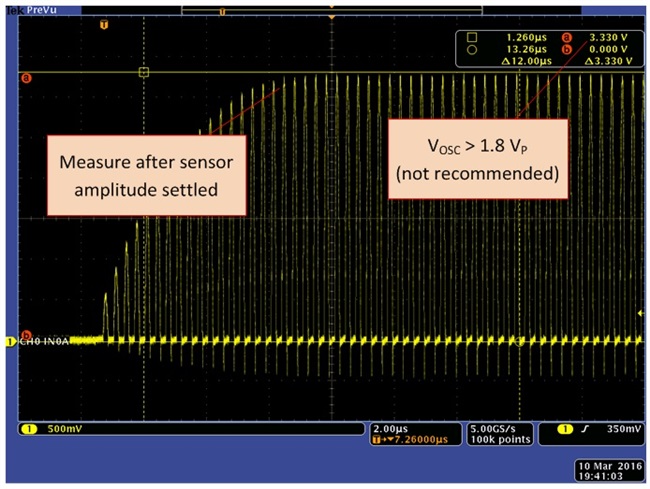 I then decreased the current setting until VOSC < 1.8V. With the chosen sensor and target distance, this happened at an IDRIVE setting = 19 (see Figure 3). Note that reducing my target distance caused the amplitude to decrease, but that is not a concern as long as I still meet my system-accuracy specifications. 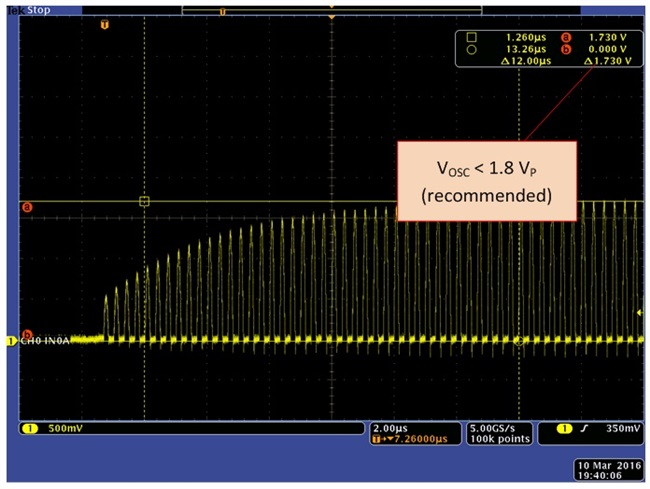 Figure 3: IDRIVE = 19, which is the highest setting that meets the Vosc< 1.8VP criterion (recommended)

If RP is so low that an IDRIVE setting as high as 31 shows an amplitude of less than 1.2VP, and if you only need channel 0, then you can use the high current sensor drive to boost the current(HIGH_CURRENT_DRV=1).

How to use multiple sensors

Many systems use multiple sensors with the same sensor characteristics in order to perform measurements of multiple targets, to perform differential measurements, or to use one sensor as a reference sensor. In this case, it is possible to use the same IDRIVE setting for all channels to ensure consistent measurement results. I recommend checking all sensors using the process described above.

If different channels use different sensor components, then evaluate each channel individually. It is not necessary to use the same IDRIVE setting across all channels.

To achieve the highest performance from your multichannel LDC, set the IDRIVE current to the highest setting below 1.8VP. Knowing the RP value is not necessary for this; you can determine the optimal setting by using an oscilloscope with the procedure I described in this post.