The next evolution in automotive op amps

In 1976, National Semiconductor (now TI) introduced the LM2904, one of the most popular operational amplifiers (op amps) worldwide. It was a time when 8-track tapes played your favorite tunes in the car, a vehicle could get you an average of 14.22 miles to the gallon, and people used paper travel maps to navigate roads unfamiliar. To say the least, the world was a much different place when this op amp was released.

After the creation of the Automotive Electronics Council (AEC) in 1993, TI released the LM2904-Q1 op amp in 2003. This automotive-qualified version found its way into applications such as media interfaces, electric power steering and battery control modules.

Now, after 17 years, the LM2904-Q1 has received a performance boost with the new LM2904B-Q1 automotive op amp, designed to help you meet the evolving needs of today’s vehicles. The timeline in Figure 1 includes just a few facts illustrating the changes to both automobiles and the driving experience.

The LM2904B-Q1 complies with all AEC-Q100 standards and includes improvements such as increased performance, improved electrostatic discharge (ESD) specifications, and the integration of electromagnetic interference (EMI) filters and industry-leading data collection with characterization. The device also costs less and has faster manufacturing lead times.

Table 1 compares the LM2904-Q1 and LM2904B-Q1.  As shown, there have been many performance improvements made to the new B version.

The AEC-Q100 ESD standard includes ESD ratings for the human body model (HBM) and charged device model (CDM) values of 2 kV and 750 V, respectively. Devices designed by TI and other semiconductor suppliers back in the 1970s do not meet these standards. The few semiconductor suppliers whose LM2904-Q1 variant meets the AEC-Q100 ESD standard comes at a premium price. The LM2904B-Q1, however, not only meets ESD standards but does so at a cost less than the previous version. Table 2 compares the ESD ratings of the LM2904B-Q1 and LM2904-Q1.

Devices in automotive designs tend to experience high levels of EMI given the increased system complexity. To combat this, TI added integrated EMI filters to the LM2904B-Q1 to increase the electromagnetic interference rejection ratio (EMIRR) performance. Figure 2 compares the EMIRR performance of the LM2904-Q1 and LM2904B-Q1. A higher level in the graph corresponds to a higher level of attenuation of the EMI signal. As the graph shows, the LM2904B-Q1 rejects more EMI signals than the LM2904-Q1. For more information on EMIRR, see the application report, “EMI Rejection Ratio of Operational Amplifiers (With OPA333 and OPA333-Q1 as an Example).” 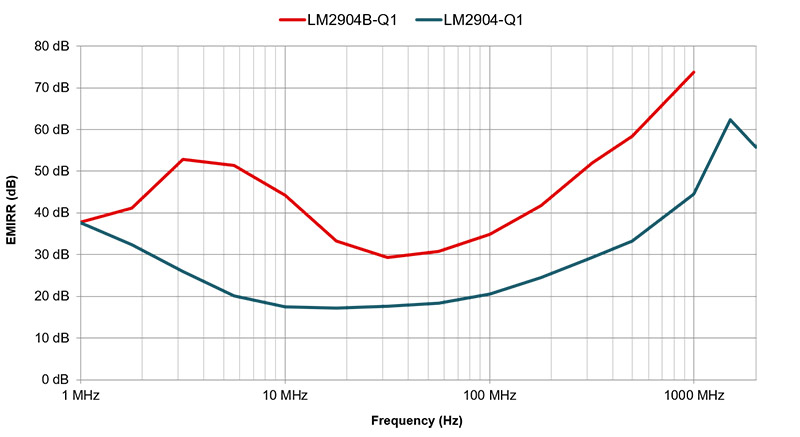 Data collection – no such thing as too much information

You would probably agree that with the saying, “There’s no such thing as too much information.” That’s why TI provides 38 graphs detailing the LM2904B-Q1’s device performance in the data sheet, making it one of the most well-characterized standard op amps in the industry. All of the graphs provide insight into what you can expect when using – and making appropriate system-level decisions with – the LM2904B-Q1.

Advancements in process technology and increased wafer diameters, along with improvements to the underlying wafer technology flow, allow TI to produce the LM2904B-Q1 at competitive quality and cost, and with a commitment to product longevity and assurance of supply.

The next-generation LM2904B-Q1 automotive op amp takes a huge step in the right direction, with improved ESD performance, increased EMIRR capabilities and significant characterization for easier integration into any automotive system. To B or not to B? The answer to Hamlet’s existential question becomes clear with the LM2904B-Q1.