When you ask a bunch of hardware engineers, “What is NVME?,” you might get the following responses:

“NVME is an acronym for ‘nonvolatile memory express’.”

While these answers are all essentially correct, they won’t help you build a storage system that leverages the advantages of this game-changing new technology. Texas Instruments has many years of experience in the hardware behind PCI Express (PCIe) and enterprise storage, and we can share insight into this important technology and how it impacts future hardware designs. Here’s how I would answer the question:

“NVME is a protocol developed explicitly for solid-state memory. While Serial Advanced Technology Attachment (SATA) remains the heavyweight champion of storage protocols, it wasn’t built to deal with solid-state storage and can’t offer the advantages of NVME.”

In order to explain SATA and NVME, let’s compare them to a physically similar counterpart: a record player. In order to play music, a turntable needle reads information from a record and outputs that data to speakers. SATA hard drives allow their “records” to spin up to 15,000rpm while reading data over a read/write head; like a record player, the architecture relies on a single needle. In comparison, NVME running on a solid-state drive (SSD) is more like an MP3 file. All of the data is laid out in a readable format, and can be read by as many as 64,000 parallel “needles” at the same time.

When it comes to transporting your data, SATA is also a physical bus, like the wire between your music player and speakers. Traditionally, it hasn’t been the bottleneck for storage drives, but a faster bus like PCIe could “boost” the maximum achievable speed.

Why should I care about NVME?

In terms of input/output (I/O) operations per second (IOPS), typical hard-disk drives range in the low hundreds, while NVME SSDs post numbers in the hundreds of thousands to millions of IOPS. In terms of read and write speeds, SATA hard disks support several hundred megabytes per second, while NVME supports several gigabytes per second – one order of magnitude greater. All of this translates to unparalleled performance gains.

How do I build NVME?

OK, so you get it – NVME is fast. But this is a guide for hardware engineers, right? So far, we’ve been describing the car without talking about the road it’s driving on. Fortunately for everyone, the answer is very simple: the PCIe bus.

NVME is a storage protocol, but the physical layer that NVME runs on is plain old PCIe. This means that hardware engineers can leverage existing resources to check compliance, use existing reference designs, and simulate with existing modeling tools. It also means that products qualified by the PCI Special Interest Group (SIG) to support PCIe Gen 3, like DS80PCI810, can support NMVE applications. 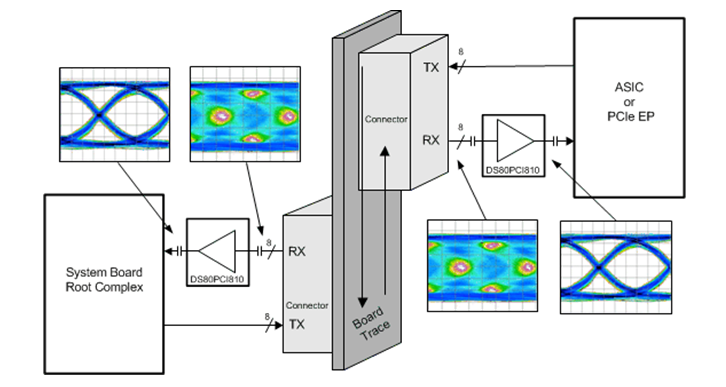 As I mentioned earlier, TI has turned decades of industry experience into reference designs and resources to get your system off the ground today. TI can also deliver all of the components to develop next-generation PCIe NVME drives, from power to signal chain.

Now that you know the basics of NVME and PCIe, leave us a note below and let us know what other topics related to PCIe you would be interested in hearing about.