Of the four vital signs, temperature is most consistent from person to person and across time. We’ve all been taught that a normal body temperature is 37°C / 98.6°F. While most people are aware that this is an average, the assumption is that it’s an average across the population. What surprises many is the fact this is also an average in time, as our body temperature is in a perpetual state of flux due to physical activity, circadian rhythms, hormonal changes, weight, and even age. With recent events, there’s been a surge in interest for wearable temperature sensors to quickly warn the wearer of illness or infection, giving them time to self-isolate and reduce spreading a contagion further. For the first time, wearable temperature sensors can also provide key insights to a wearer’s thermal cycles, allowing algorithms that personalize what is normal for an individual, and detecting changes that could indicate an illness even before hitting the threshold for a low-grade fever (38oC / 100.4oF).

Looking for a discreet yet accurate wearable temp sensor?

Before diving into wearable tech, it’s important to understand where the benchmark of 37°C / 98.6°F came from. First proposed in 1851, German physician Carl Reinhold August Wunderlich analyzed temperature across millions of axillary measurements for 25,000 patients. Factoring in all the variability mentioned above, he proposed the normal range for a healthy adult to be 36.2°C-37.5°C, the defacto standard even today.

However, a recent study from Stanford University questions whether 37°C is still a valid measure of normal body temperature. Analyzing records set back to 1860, Stanford researchers showed that average body temperature has steadily decreased by 0.03°C per decade of birth (adjusted for factors such as gender, age, height and weight). So yes … you are now officially cooler than your parents.

With all this variability, let’s consider the implications. Take an 80-year-old man. Because of age, it would be pretty normal for his body temperature to be 36.2°C / 97.1°F. He wakes up at 6 a.m. and takes his temperature. Due to circadian rhythms, there could be a 0.5°C / 0.9°F drop in core temperature placing him at 35.6oC / 96.2oF. For him to even hit the standard threshold for a low-grade fever (38oC / 100.4o) his temperature would need to increase by 2.4oC / 4.2oF, which would be substantial. While a medical clinician would know to use a lower threshold, things could easily get more complicated if the man also had a thyroid issue elevating or lowering his temperature.

As wearable temperature sensors help enable the vision of the quantified self, the continuous tracking they provide could launch a new era of personalized medicine to more quickly identify deviations from what’s normal, indicating a potential infection, hormonal shift or disease.

Compact high accuracy sensors such as the TMP117M are enabling a new generation of wearables, such as temperature tracking earbuds where size is critical to proper placement within the ear without impeding sound quality, as shown in Figure 1. 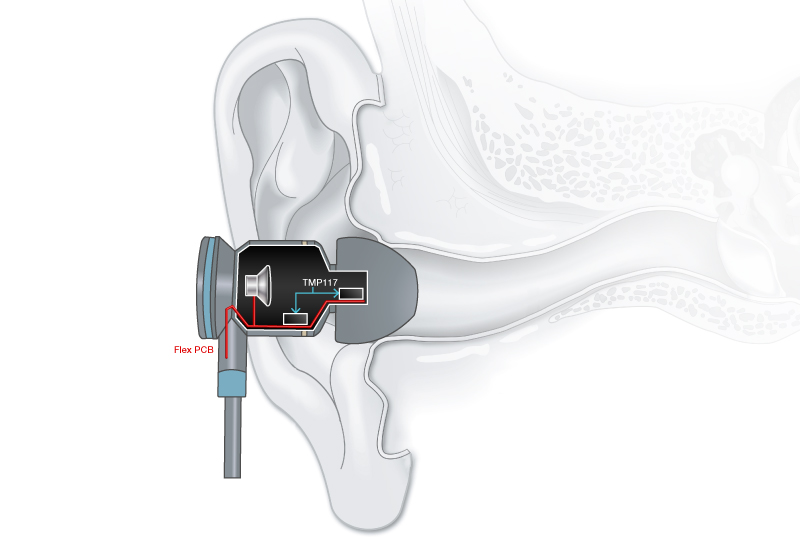 Connectivity options like Bluetooth® Low Energy unleash the true power of a wearable temperature sensor. As a parent of a child whose fever often exceeds 40°C (104°F) when she’s sick, it would be a huge relief to receive a notification on my smartphone that detects when her antipyretic medication is wearing off – before her temperature spikes to dangerous levels. Translating the same Bluetooth-enabled temperature solution to a hospital setting could bring a range of benefits from enabling patients to move more freely without being tethered to a patient monitor in their rooms, reducing the load on nursing staff to manually take temperature measurements, or improving triage in congested waiting rooms. Figure 2 shows a simple temperature monitoring Bluetooth patch that can be created in a small form factor which can be easily applied to a patient. 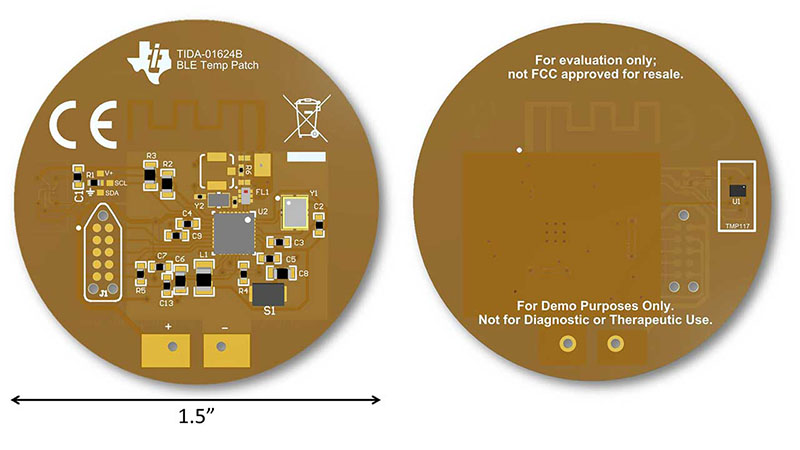 To accelerate wearable designs, be sure to check out TI's reference designs for body temperature tracking hearables and Bluetooth-enabled skin temperature measurement patch featuring the TMP117 with a CC2640R2F Bluetooth Low Energy wireless microcontroller. This design demonstrates how to construct a wearable temperature monitoring patch with an integrated antenna on a flexible substrate for maximum user comfort.