How can I achieve accurate gain error and drift with a switched-gain transimpedance amplifier?

The transimpedance amplifier (TIA) is one of the most common circuits in the world of precision analog circuits. The dynamic range required of a single TIA can be quite a challenge, often spanning many decades, such as picoamperes to microamperes.

Selecting a single resistor to accommodate such a wide dynamic range is a lose-lose situation, so circuit designers will often turn to an array of switches to select a few different resistor values, depending on the current level measured at the time. The switch on-resistance (RON), drift and nonlinearity do play a significant role in TIA accuracy, however, particularly at lower feedback resistor values.

TI’s OPA3S328 is a dual operational amplifier with integrated switches for transimpedance applications. It includes two wide-bandwidth (40 MHz) low-input bias current precision amplifiers with a multiplexer to select the different gains, and a second set of switches for Kelvin sensing. In this article, I’ll illustrate the advantages of Kelvin sense switching connections over traditional switched-gain TIA circuits.

This is the second installment in a four-part series discussing how to increase system accuracy and efficiency with operational amplifiers built on TI’s new, proprietary complementary metal-oxide semiconductor precision process technology.

It is possible to implement a TIA by cascading a single-gain TIA with a second programmable gain amplifier (PGA) stage. However, a better approach is to incorporate the programmable gain and TIA into a single stage. This approach provides a significant advantage from a noise performance perspective, since the sensor signal is gained on the first transimpedance stage, resulting in lower total output noise. 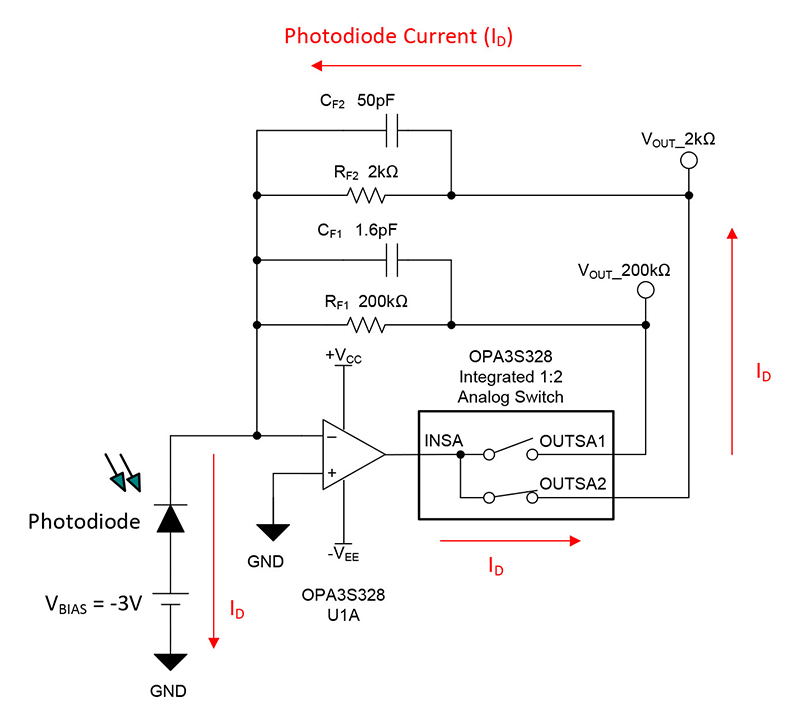 The feedback resistor (RF) determines the gain of the transimpedance operational amplifier and converts the photodiode current (ID) to a voltage (VOUT) using Ohm’s law, VOUT = IDRF. For an accurate transimpedance current-to-voltage conversion, the amplifier’s input bias current and input offset voltage must be small. The OPA3S328 offers a low offset voltage of ±10 µV and a low-input bias current of ±0.2 pA. The gain resistors are typically decades apart to provide optimal resolution for different ranges of current.

Consider the electrical characteristics of the switches when designing the switched-gain TIA. The capacitances and resistances of the switch will affect the bandwidth and stability of the circuit. Furthermore, the RON of the switch can be a source of gain error. 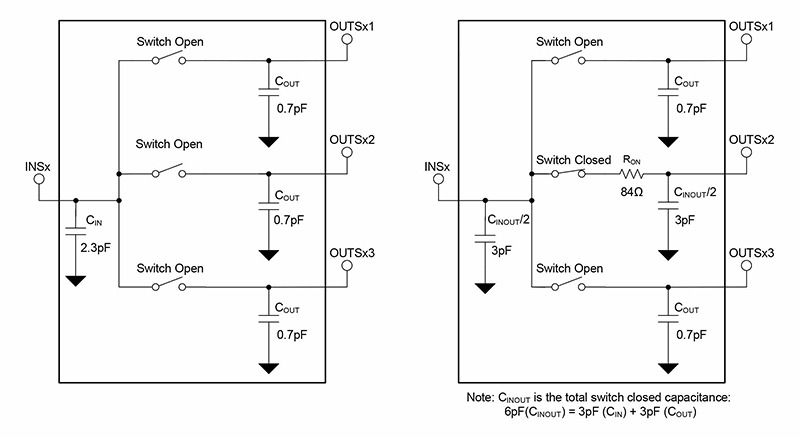 On the programmable TIA, the voltage error across RON can be significant at the higher photodiode currents.

Figure 3 shows the calculation of the TIA output accounting for the RON voltage drop. In this example, the circuit is powered with a +5-V supply and uses a feedback resistor where RF2 = 2 kΩ, for a maximum photodiode current of 2 mA and a target TIA output of +4 V. The voltage drop across RON is 250 mV, however, and the TIA output has a significant error. 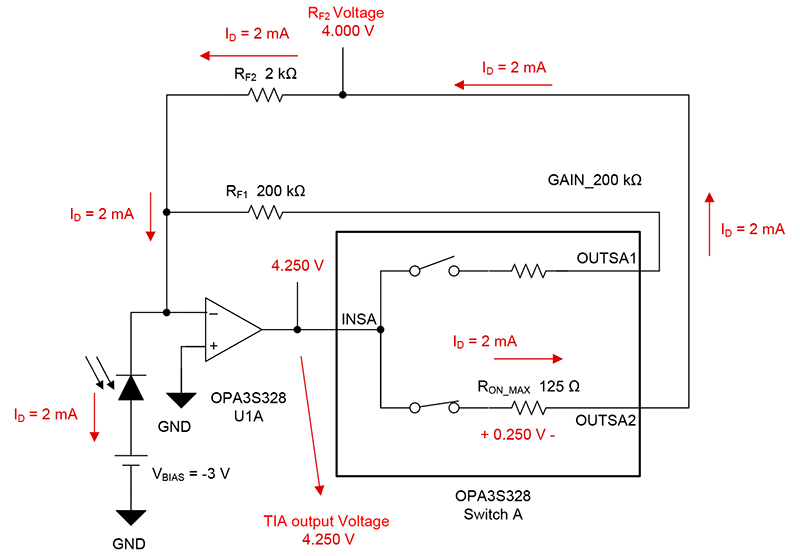 The RON will produce DC gain errors and distortion on the TIA. These gain errors are substantial at lower feedback resistor values. Furthermore, the RON changes with temperature and the switch voltage, producing gain error drift, nonlinearity and distortion. Figure 4 shows the change of RON vs. the voltage difference across the switch. 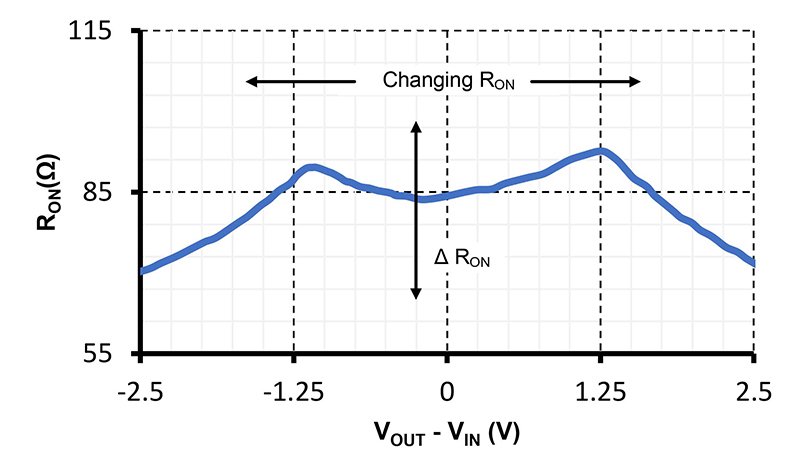 One way to virtually eliminate or significantly reduce the gain and non-linearity errors due to the switch series resistance is to build a multiplexer using the second integrated switch of the OPA3S328. The multiplexer input senses the TIA output connection for the selected gain right at the RF feedback resistor terminal. The second amplifier stage is configured in a high-impedance noninverting configuration, buffering the multiplexer and providing an accurate Kelvin sense connection of the TIA output for each gain. Since the input bias current of the operational amplifier is minimal, less than 10 pA, the voltage drop across the switch OUTSB2 RON is negligible.

Figure 5 shows the OPA3S328 circuit using switch B in a 3-to-1 matrix configuration to build the Kelvin sense connection multiplexer, buffered with a second-stage amplifier. 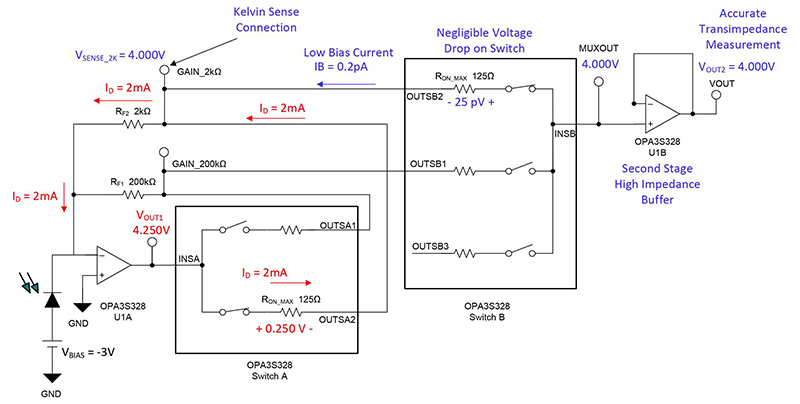 The Kelvin sense connections eliminate the gain error, drift and nonlinearity because of the switch RON through the high impedance second-stage amplifier. It is also possible to configure the second stage in a noninverting gain configuration, adding flexibility for higher gains while maintaining circuit bandwidth.

The next installment of this series will discuss how to achieve microvoltage-level precision in thermocouple and thermopile applications.