Reduce emissions and drive up immunity in your isolated CAN systems

With more and more of today’s systems operating at different voltages, isolated CAN transceivers have become integral in applications ranging from elevators to electric vehicles to even marine systems.

These transceivers help maintain reliable communication between two voltage domains in a system by combining the prioritization and arbitration features of the Controller Area Network (CAN) standard with the benefits of isolation (breaking ground loops, withstanding voltage differences, common-mode transient immunity, etc.).

Emissions are the unintentional release of electromagnetic energy. Ideally, low emissions ensure reliable subsystem operation while at the same time not affecting the performance of adjacent subsystems.

Depending on the market (industrial or automotive) and application, systems must comply with different emissions standards. Even though emissions tests are performed at the system level, designers typically choose components that meet requirements at the component level. This helps ensure that the individual devices do not exceed the limits by themselves. System design and board layout also play an important role in the overall emissions performance of the systems. Among the various emissions tests, the Zwickau standard is a stringent test for automotive applications that characterizes the emissions performance of CAN transceivers.

Figure 1 is an example of a board used for EMC testing. The board features three isolated CAN transceivers connected to the same bus. Emission measurements are taken at the test point (CP1 in figure 1) while one transceiver transmits a 50% duty cycle, 250 kHz square wave signal. 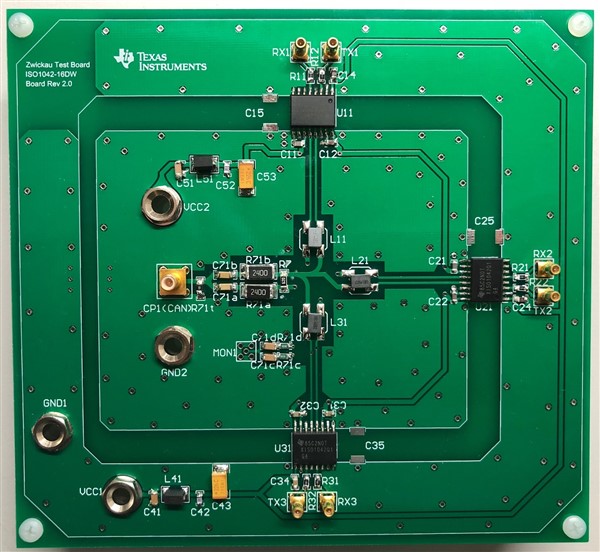 Conducted emissions data at classic CAN data rate using the ISO1042 on the EMC test board is shown in figure 2. Immunity is a device’s ability to function without error in the presence of interference. To demonstrate the noise immunity of isolated CAN devices, we performed a direct power injection (DPI) test on the same circuit shown in figure 1, but with a different coupling network. The frequency of the noise injected on the bus was swept and the difference in the transmitted and received pattern was checked via a mask test. The noise signals injected for the test comprised a continuous wave (CW) noise signal and an amplitude modulated (AM) noise signal. The AM signal was an 80% 1-kHz signal. Variations more than a certain voltage limit (±0.9 V) vertically or a time limit (±0.2 µs) horizontally are considered a failure.

We performed the test under two different conditions:

Figures 3 and 4 show the ISO1042 plot under these two conditions for classic CAN. In both cases, the isolated CAN performance was above the limit lines, which indicated passing DPI tests. Passing these immunity tests ensures reliable communication with reduced system errors and failures. Integrated isolated CAN devices are expected to meet the same emissions and immunity specifications as their non-isolated counterparts. Given their low emissions and high immunity in a small package, the ISO1042 and ISO1042-Q1 comply with the stringent requirements of industrial and automotive applications.