RF sampling: aliasing can be your friend

Communication system engineers are generally obsessed with signal-integrity issues. They want a low noise system to discern very small signals. They want high linearity performance to maintain immunity to interference. And when discussing high-sampling-rate data converters, their instinct is to sample at a very high speed in order to get many sample points within the period of the signal for best fidelity.

According to the sampling theorem, the minimum sampling rate must be at least twice the largest bandwidth of the signal. Sampling at speeds lower than the minimum results in aliasing. Ugh! This is bad, right? Not necessarily – aliasing can be your friend. Using an undersampling technique, you can use aliasing to your advantage and effectively mix a higher radio frequency (RF) down to a lower frequency captured by an analog-to-digital converter (ADC).

Take a look at the ordinary sinusoid shown in Figure 1a. The blue trace represents the ideal sinusoid signal. The red trace shows the discrete sample points of the ADC. In this example, there are five sample points per period of the signal. With those discrete points, there are actually an infinite number of frequencies that will intersect those exact same points. Figure 1b illustrates a frequency that is six times higher than the original signal yet still intersects the same sample points. The higher frequency will alias down to the ADC’s capture bandwidth. The ADC is acting like a conventional RF mixer in this case. With proper selection of the sampling rate, you can apply this undersampling technique to simplify the receiver architecture.

Figure 1: (a) Sinusoid signal with discrete sampling and (b) visualization of higher-frequency aliasing 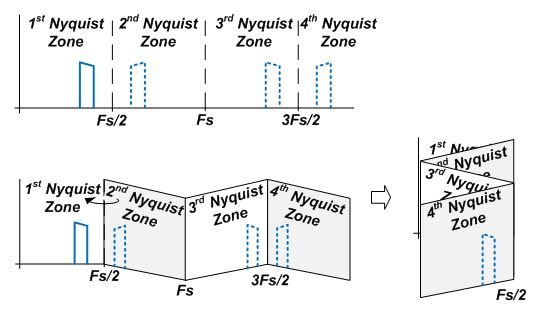 Although the sampling theorem states that any higher-frequency component can be aliased down, there is a practical constraint with the ADC’s sample-and-hold circuitry that limits its input bandwidth. The input-bandwidth constraint acts like a filter on the input. As signals exceed the input bandwidth, they will become attenuated to the point where the information is unusable; hence, input bandwidth is an important parameter to investigate when using undersampling.

Check back for next month’s post, when I will discuss the advantages of cheating physics with oversampling.