Throughout every automobile lies an extensive in-vehicle network of sensors, motors and switches. As these networks grow to accommodate increasing connectivity across the vehicle, their overall power consumption grows as well, which can negatively impact vehicle emissions.

There are several approaches available to reduce power consumption, depending on the network protocol in use. For classical Controller Area Network (CAN) designs, which I’ll focus on in this article, a partial networking architecture can help engineers and original equipment manufacturers (OEMs) reduce power consumption and corresponding emissions.

Based on the International Organization for Standardization (ISO) 11898-5 standard, partial networking enables specific control of the network nodes or clusters of nodes that activate when a wakeup signal is sent across the CAN bus. It leaves the remaining nodes in a lower-power sleep mode which increases network performance and limits vehicle power consumption.

Figure 1 shows a simplified automotive bus architecture, with each circle representing a CAN or CAN Flexible Data Rate (FD) node that performs specific actions during vehicle operation. 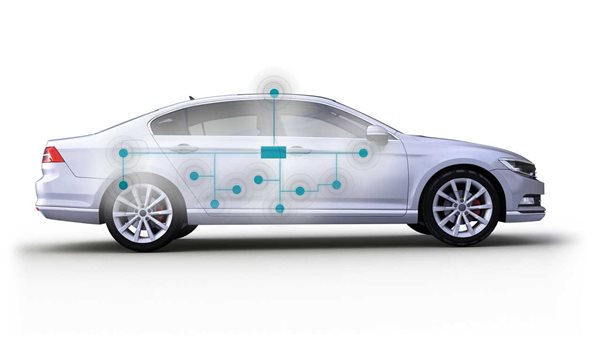 To better understand the benefits of partial networking, let’s look at an example using windshield wipers in a non-partial-networking configuration. Typically, when a driver activates their windshield wipers, the steering column control module, which monitors each wiper stocks position, sends a wakeup command to the wiper’s body control module to power the wiper motor.

In a vehicle without partial networking, all nodes on the bus will wake upon this wake-up request to see if they are the intended recipient of the command. Once a node determines that it is not the recipient of the request, it will return to standby mode (if supported). This is inefficient from a power-consumption standpoint, because all nodes wake up to determine whether they are the recipient of a signal before returning to a standby or sleep state if they are not the intended recipient.

In the windshield wiper example, partial networking would eliminate this additional wake cycle by enabling targeted wakeup of only the targeted motor. In this configuration, the other nodes remain in standby, which increases efficiency for lower power consumption. When you consider that a vehicle may have more than 50 different nodes, the potential power savings could be considerable.

Based on information published by CAN in Automation (CiA), an international group of users and manufacturers for the CAN protocol, vehicles with only 15 electronic control units (ECUs) and a power consumption of 250 mA in active mode and 50 µA in selective sleep mode can save almost 1 g of carbon dioxide per kilometer (CO2/km). Extrapolated to 50 ECUs, this figure could be as much as 3 g of CO2/km.

If the vehicle features partial networking, a CAN transceiver that supports selective wakeup will help engineers reap the full benefits of this configuration. CAN transceivers like the TCAN1145-Q1 and TCAN1146-Q1 enable power and emission savings while helping engineers more easily meet stringent industry-standard automotive certification requirements.