It’s been quite a while since the current PCI Express (PCIe) Gen 4 specification became official. The PCIe Gen 4 specification reached version 1.0 in late 2017 while PCIe Gen 5 reached version 1.0 in early 2019. PCIe Gen 4 doubles the available data rate to 16 Gbps and provides backward compatibility with previous PCIe generations. By using the same 128/130 encoding scheme and equalization training, system architects don’t expect conversion issues as the industry jumps to the updated standard.

Doubling the data rate does impose some distance limitations on the native channel length, especially with standard FR4-printed circuit board material. Improving the connector and enhancing PCIe receiver capabilities has translated into a larger attenuation budget for the PCIe channel. Even with the larger attenuation budget, the maximum channel length tends to be shorter for a PCIe Gen 4-compliant link. To counteract increased attenuation, a much higher percentage of PCIe Gen 4 systems are using link extension devices and/or improved board materials. The term link extension can describe two types of signal conditioning devices, as shown in Table 1.

A linear equalizer is an analog-only device designed to boost the incoming signal with continuous time linear equalization (CTLE). This type of gain and link extension is best used for system channels dominated by attenuation due to the physical nature of some server topologies where insertion loss violates PCIe Gen4 specification of 28 dB at 8 GHz by a good margin. An example topology is shown in Figure 1.  System components are not designed to handle the increased insertion loss alone even with improved board materials.

Figure 2: PCIe Tx preset family, before and after a channel that includes a linear equalizer

A PCIe retimer is a combination of analog and digital circuits with specific features and requirements to directly interoperate with other PCIe Gen 4 devices. The addition of digital control and protocol awareness enables the retimer to completely reset the system’s jitter budget and handle the full channel attenuation specified in PCIe. This doubles the effective reach of a PCIe system link, enabling a wide variety of system architecture and topology choices, as shown in Figure 3. 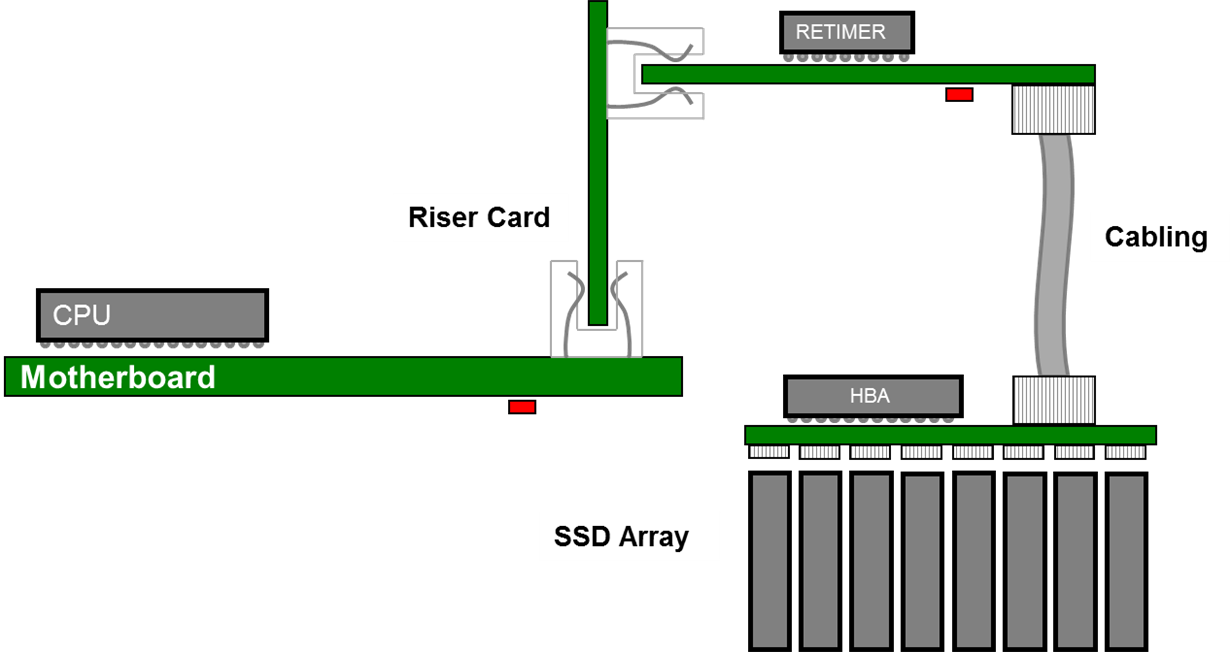 The PCIe standard continues to be the primary input/output (IO) interconnect within the server and PC environment. As engineers work to extend PCIe beyond the server to take advantage of its simplicity, scalability and bandwidth, they must also deal with PCIe clock distribution throughout the expanded system. To help alleviate distribution problems, many designs are moving to PCIe implementations that encompass multiple local clock domains. Retimers supporting separate reference clock with independent spread (SRIS) are ideally located to be a clock domain boundary as PCIe signals travel across cables or between server chassis in a rack.

As a recognized system component, a PCIe retimer will engage in equalization training on the upstream and downstream channels. This built-in capability automatically optimizes the signal-conditioning solution for short, medium or long PCIe-compliant channels.

The choice of a signal conditioning solution (Table 2) whether it is a redriver, a redriver with integrated mux/demux, or a protocol-aware retimer will depend on many system factors. Systems that need help to lower the effective channel attenuation between system components can consider the redriver since it is a lower-power, ultra-low latency and low-solution cost alternative to a full retimer implementation. Systems with complex topologies, high levels of attenuation and in need of jitter budget reset are good candidates for a retimer solution.