A previous blog addresses the highway addressable remote transducer (HART) protocol and its place in sensor transmitter designs. To recap, simple transmitter designs traditionally communicate an analog value, typically referred to as the process variable (PV), through a current loop. This PV is generally tied to a sensor value (humidity, temperature, pH, pressure) that is represented by a 4-to-20mA analog signal. The analog value can traverse kilometers of wire in reaching the analog front-end circuitry, which records the potential drop across a shunt resistor in interpreting the transmitted sensor value.

Now, this is great if you want to communicate one value over lengthy cabling. But what do you do if you want to send or receive additional data over the same two wires? By putting HART into your transmitter design.

By including a HART modem, your transmitter design can now communicate extensive calibration routines, send diagnostic data or communicate PVs from other included sensor platforms. This communication is possible through the HART frequency shift-keying (FSK) waveform, which couples onto the analog current signal.

Let’s start off with the circuit shown in Figure 1. 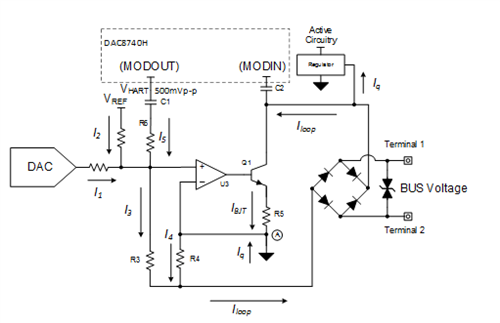 I know that the circuit may look a little daunting, but the only difference between this circuit and the one shown in the simple two-wire transmitter design blog post is the inclusion of the DAC8740H HART modem. The low quiescent current of the DAC8740H HART modem, 180µA, makes the modem an excellent candidate for low-power sensor transmitter solutions. Using the methods shown in the crash course will determine a gain of (1 + R3/R4) for the loop current.

There are only two connections between the HART modem and transmitter shown in Figure 2. The DAC8740H MODOUT pin of the HART modem connects to the transmitter through an AC-coupled capacitor, C1. This capacitor, along with R6, creates a high-pass filter that attenuates frequencies lower than the chosen cutoff frequency, 1/(2 × π × R6 × C1). 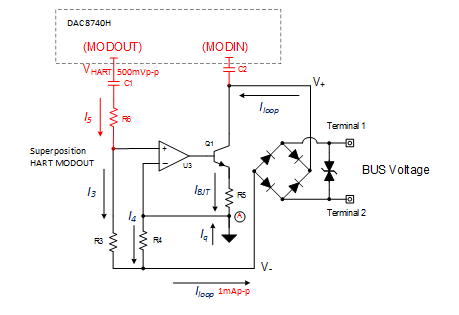 During operation, the HART FSK signal is driven from MODOUT and superimposed onto the loop current analog value with an FSK amplitude of 1mApp. Resistor R6 can change and set this FSK amplitude, which is connected in series from the HART modem to the noninverting terminal of U3. Though superposition, Equation 1 calculates the AC component of the current loop as:

Substituting schematic values for R3, R4 and the peak-to-peak voltage of MODOUT will reveal the value of R6. Once you have the value of R6, you can calculate C1 by choosing the cutoff frequency of the high-pass filter. In the Highly Accurate, Loop-Powered, 4mA to 20mA Field Transmitter with HART Modem Reference Design, the cutoff frequency is 679Hz, ensuring that noise and frequencies lower than 1,200Hz and 2,200Hz are effectively attenuated without significantly impacting the HART band frequency range.

The HART signal receiving pin – the DAC8740H MOD_IN pin – connects to the positive bus supply net of the transmitter circuit through an AC-coupled capacitor, C2, and into an internal bandpass filter.

You’ve done it! You’ve now completed a transmitter design with plenty of HART to go around! The next step is to create an intelligent sensor transmitter solution by selecting a sensor interface, like the TMP116, which provides better accuracy than a Class A resistance temperature detector (RTD) all from a single chip.