The next-generation QFN: Do you have what it takes to use it?

“I need it to be thinner, lighter, smaller ... and most of all, I need it to deploy a new, state-of-the-art manufacturing technology that defies the norm and revolutionizes how we make a product.”

Does this sound like a CEO speech during the design kick-off of a next-generation smartphone or tablet? Sometimes new products are innovative enough to create their own market and completely change the industry. Nimble startups and other companies that can create or adapt to these market revolutions will grow and flourish. Companies that don’t change and adapt to trends are at risk of being washed away.

Few of today’s groundbreaking products would be possible without foundation components to build upon. Some might dismiss old-school standard logic devices as unimportant; however, these devices are often the “glue” or the building blocks in many of today’s most innovative electronics. Often, these general-purpose, small-form-factor logic-function devices can become key players in disruptive innovation.

Traditional, cost-optimized, simplified assembly processes used for today’s semiconductor components will eventually make all systems look and feel the same; as a result, innovative companies are hard-pressed to find new building blocks to take their products to the next level. Yet Texas Instruments has released the X1QFN, one of the world’s smallest, thinnest and lightest packages for common standard-logic functions, including the SN74HC595B shift register and SN74LVC244A octal buffer/driver with 3-state outputs.

Putting these functions in the X1QFN package will enable innovators to design their products into smaller applications where it wouldn’t have been possible to use them with previously available packages on the market.  Space constrained designs can now take advantage of general-purpose input/output (GPIO) expansion, drive motors, LED lights, peripherals, clock fan-out, sensors, timers, switches, signal redriving, and other basic functions – all enabled by the X1QFN package. 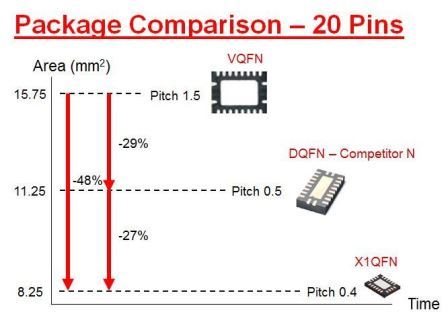 As with any new technology, there may be barriers to cross. The X1QFN requires a 0.4mm-pitch assembly, which may complicate some manufacturing processes, but with tremendous printed circuit board (PCB) space savings, the efforts will certainly pay off.

Are you ready to invent the next industry-changing gadget with our standard logic X1QFN package? Tell me how you will use it (sign in to comment).