SPICE simulation is an immensely valuable tool that allows engineers to have high confidence in their analog designs before ever stepping foot in a lab. While many of us live and die by our simulation results, have you ever stopped to question if your favorite operational amplifier’s (op amp) SPICE model matches the specs promised by its data sheet?

Our competitors’ models can often be inaccurate or oversimplified, as shown in the closed-loop output impedance (Zout) comparison in Figure 1. In this case, it’s easy to see the difference between what’s promised and what’s measured. This difference can have a big impact on your designs, potentially causing some unwanted surprises when you fire up your circuit in the lab for the first time. 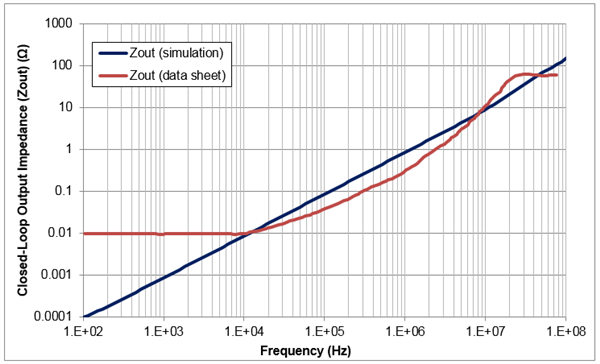 TI is proud to have some of the most accurate SPICE models in the industry. That being said, it’s still a good practice to “trust, but verify” that the models used in your circuit are up to the task. In this blog series, I will show you the recommended test circuits for many of the most critical op amp parameters, starting with common-mode rejection ratio (CMRR).

An op amp’s CMRR is formally defined as the ratio of its common-mode gain to its differential-mode gain. In practical terms, the CMRR spec tells you how much additional offset voltage is generated at the op amp’s input when the input common-mode voltage changes. A high CMRR is desirable, meaning that you’ll see less additional offset voltage. CMRR also changes over frequency, so TI data sheets provide a curve representing typical CMRR over frequency, as shown in Figure 2. For a deeper discussion of CMRR and its impact on circuit performance, watch our TI Precision Labs – Op Amps video on CMRR. 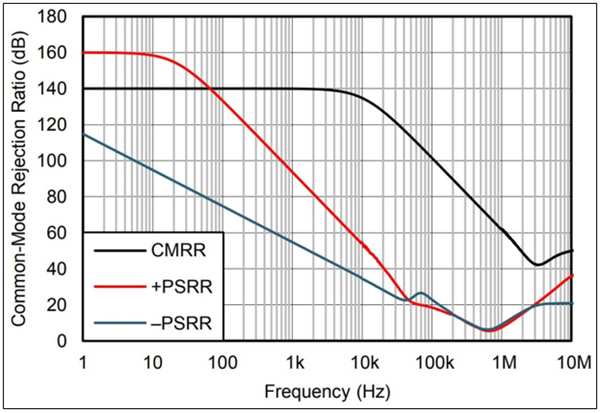 I’ll provide two different approaches for measuring op amp CMRR in simulation. Both of these methods were developed by my colleague Zak Kaye, who is well on his way to becoming an analog guru!

The first method is a modification of the classic differential amplifier circuit, shown in Figure 3, that will test the CMRR of the OPA2187, a new chopper amplifier from TI with 140dB of common-mode rejection. 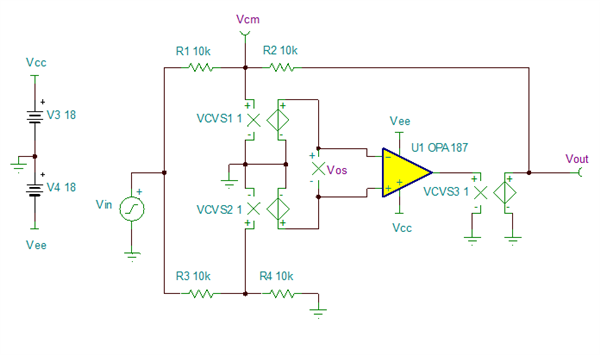 This circuit takes advantage of a SPICE simulator’s ability to isolate nodes using voltage-controlled voltage sources. We’ve strategically placed these sources at the op amp input and output to isolate the feedback network from the op amp’s input and output impedance, allowing for better extraction of the CMRR response. To plot the CMRR, simply run an AC transfer function and use post-processing to create a curve for (Vcm / Vos). Figure 4 shows the results for this configuration compared to the OPA2187 data sheet. 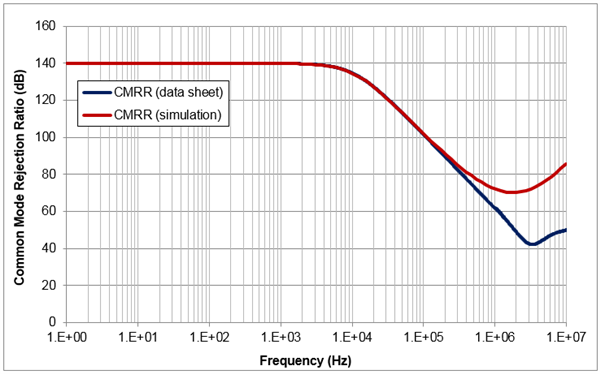 The circuit extracted CMRR fairly well, but the simulation doesn’t match the data sheet that closely at high frequencies. Is that because the model is inaccurate, or are there limitations with the test circuit? Let’s try another circuit configuration and find out.

To plot CMRR, run an AC transfer function and use post-processing to create a curve for (ADM / ACM). Figure 6 gives the results for this configuration compared to the OPA2187 data sheet. 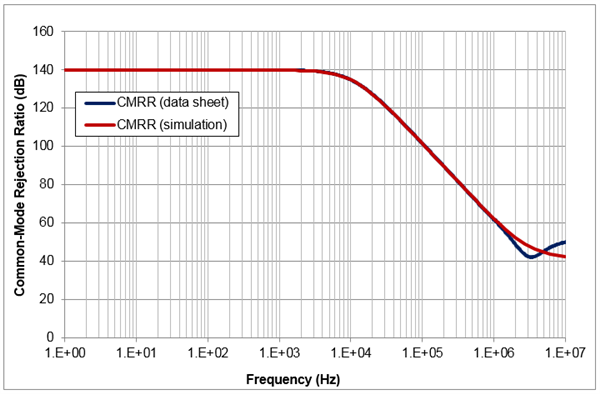 As you can see, the open-loop results match the data sheet very closely due to the true isolation of the common- and differential-mode gains of the op amp. I recommend this approach whenever possible.

Finally, I’d like to show an easy way to measure CMRR on the INA1650, our new high common-mode rejection audio line receiver. Because of the highly integrated design of the INA1650, you can simply connect each input to the same AC source, run an AC transfer function, and invert the output in order to extract CMRR, as shown in Figures 7 and 8. 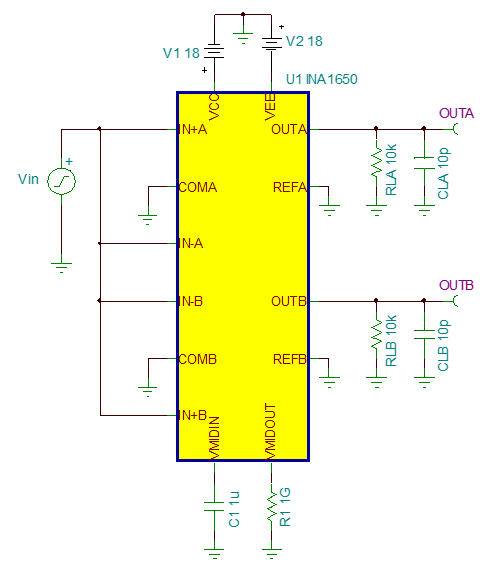 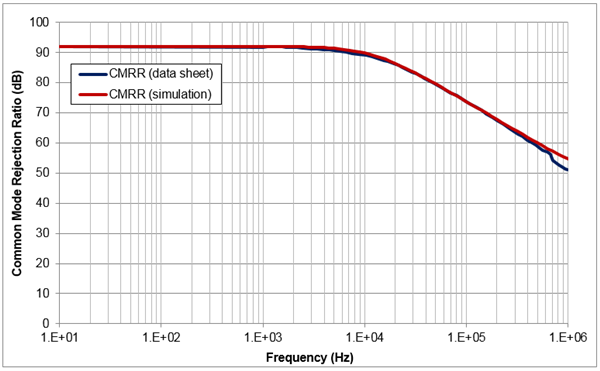 Thanks for reading this first installment of the “trust, but verify” blog series! In the next installment, I’ll discuss how to measure open-loop output impedance and small-signal step response to perform stability analysis. If you have any questions about simulation verification, log in and leave a comment, or visit the E2E™ Simulation Models forum.