It’s no secret that low-voltage rail-to-rail input operational amplifiers (op amps) are gradually taking the place of traditional high-voltage amplifiers in many precision applications. Rail-to-rail input amplifiers are extremely useful, since their linear input-voltage range spans the entire power-supply voltage range (or even beyond). They traditionally achieve this span through the use of two pairs of input transistors instead of one pair, but you should be mindful of new design challenges that this topology creates.

One challenge is the change in the op amp’s input offset voltage (VOS) when the amplifier input stage crosses over from one pair of transistors to another. This phenomenon is often called input crossover distortion. VOS is an important performance characteristic of a precision op amp, and many systems must calibrate out the initial offset voltage to meet their performance goals. Any changes to VOS, whether caused by changes in input common-mode voltage (VCM), temperature or other variables, are highly undesirable and can throw off a system’s total error performance. Figure 1 gives an example of VOS changing dramatically with increased VCM. 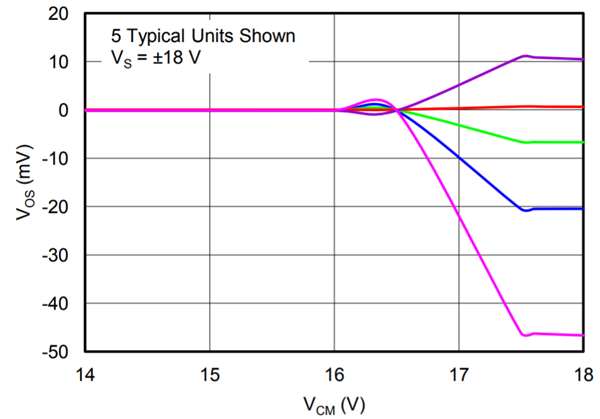 When using SPICE simulation for rail-to-rail input amplifier designs, it’s wise to check that the VOS vs. VCM behavior of your models matches the real devices. Figure 2 shows the recommended test circuit. 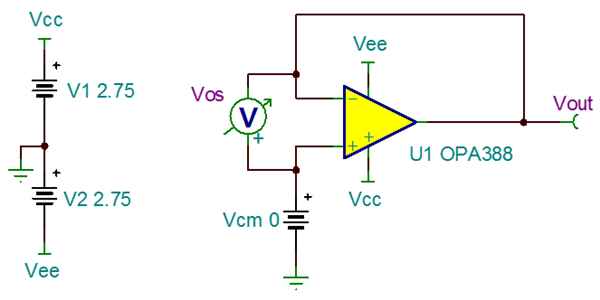 This simple circuit places the op amp in a unity-gain buffer configuration to prevent output swing limitation issues, then sweeps VCM to determine the change in VOS. To plot VOS vs. VCM, run a DC transfer characteristic while stepping VCM across the entire supply voltage range and measure VOS across the op amp input pins as shown in Figure 2.

Let’s use this method to test the response of the OPA388, a new zero-crossover precision amplifier from TI that uses a charge pump in its input stage to achieve true rail-to-rail performance using only a single transistor pair. This eliminates the input crossover distortion found in traditional rail-to-rail input op amps. See Figure 3. 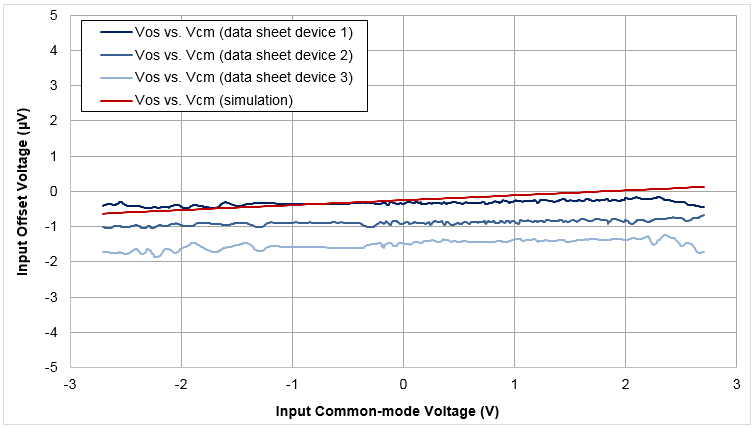 The simulated results match the responses of the three test devices given in the OPA388 data sheet very closely, with a change of less than 1μV over the entire VCM range.

Let’s use the same test circuit to check the response of the OPA2325, another zero-crossover precision amplifier from TI. See Figure 4. 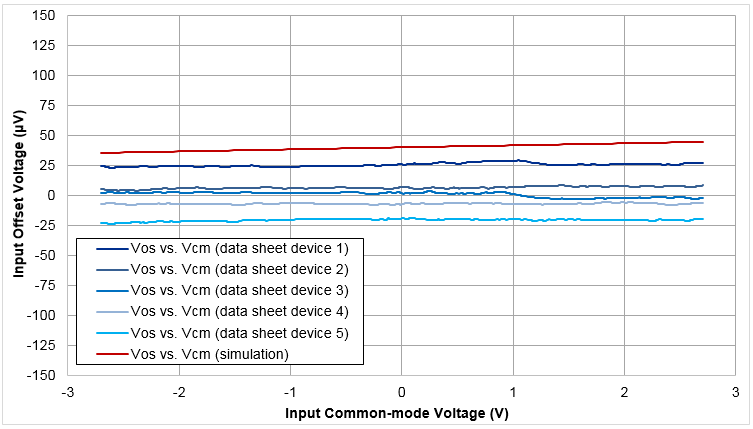 Thanks for reading the second installment of the “Trust, but verify” blog series! In the next installment, I’ll discuss how to measure open-loop output impedance and small-signal step response to perform stability analysis. If you have any questions about simulation verification, log in and leave a comment, or visit the TI E2E™ Community Simulation Models forum.