Two ways to save power with low-power Ethernet

“Why is Ethernet so power-hungry?” is a common question. A typical active power 10/100 Mbps Ethernet physical layer (PHY) transceiver consumes 110mW to over 300mW, while a 10/100/1000Mbps Gigabit Ethernet PHY consumes 450mW to over 1,000mW of power. It’s not uncommon for an Ethernet PHY to be one of the single largest consumers of power on a board, and to be a significant factor when evaluating the heat budget of an enclosed system. There are various low-power modes conceptualized for Ethernet that reduce overall system power. In this post, I’ll discuss two popular power-saving features that enable cooler systems and lower power costs.

Energy-efficient Ethernet (EEE), as defined in Institute of Electrical and Electronics Engineers (IEEE) 802.3az, is a PHY and media access control (MAC) standard that eliminates idle signaling during times of low channel utilization. As Figure 1 shows, EEE enables periods of low power where the transmitter is disabled during “quiet” times, broken by short refresh periods. These quiet times save power by eliminating the wasteful practice of continuously transmitting idle symbols across an active link, while the refresh periods ensure that the link presence and timing inside of and between the PHYs remains in a valid state.

EEE mode appears transparent to higher layers, as the MAC signals for the PHY exit the EEE state when data is present to transmit. The PHY will exit low-power mode and transmit idle code groups to bring the far-end device out of low power.

The WoL scheme enables engineers to save on overall system power while keeping the Ethernet transceiver awake when the system has well-defined stimuli that should trigger wake ups. There are a few different ways to implement WoL, discussed in the application note, “DP83822 Wake-On-LAN.”

Figure 2 shows a magic pattern scheme for which the Ethernet PHY will monitor ingress packets before signaling a wake up. 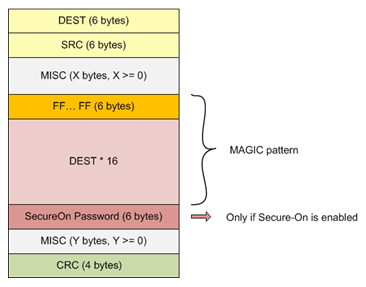 Now that you know of two different ways to save power using the Ethernet PHY, which scheme do you plan to implement within your system? Log in to leave a comment, or join the TI E2E™ Community Ethernet forum.