When I was young, as most aspiring engineers do, I dreamed of going to outer space, specifically Mars. And I thought the only way to get there was aboard the NASA space shuttle. The cancellation of the shuttle program crushed that boyhood dream of mine, or so I thought. The recent commercialization of satellites and launch services, that may someday provide space exploration, has kept that dream alive for all of us. With some new innovation and the decades of experience out there I believe they will be able to make this dream a reality.

Although, keep in mind, outer space is a very dangerous place due to its extreme harsh environment. There is radiation, flying debris, extreme cold and hot temperatures, and many environmental disturbances while in orbit that must be taken into account. With careful consideration, expert spacecraft designers use radiation hardened integrated circuits (from companies like Texas Instruments), temperature and inertial control, and special exterior structures to protect the very space vehicle that could carry us to space from all of these environmental effects.

Since we’re not all astrophysicists, let’s start with understanding the seven basic subsystems of a spacecraft or satellite:

1. Propulsion. When you think of propulsion, you might envision the large rocket boosters that launch a satellite into outer space or return a space shuttle to Earth. But the satellite launch system is only a small function of an entire propulsion subsystem. A propulsion system’s main function is to adjust orbit and attitude – to position the spacecraft in the right orbit; control descent; or even reposition the spacecraft for a photo opportunity, like NASA did with the Mars Odyssey in October 2014 to photograph the Siding Spring comet (Figure 1). 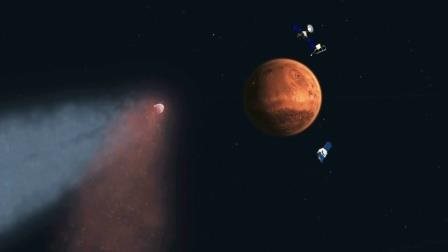 2. Power.This subsystem is responsible for distributing, storing (via batteries), generating (via solar) and regulating power. Most satellites provide standard power buses similar to telecommunication power systems. These standard power rails include 28V, 48V, 50V, 75V and 100V. Because power efficiency is much better at higher voltages, these higher voltages (similar to power lines on Earth) are distributed throughout a spacecraft. However, a distributed architecture creates the need for two additional power buses, typically located within the next four subsystems I’ll discuss below. They are the intermediate power bus (28V to 5V) and the point-of-load buses (0.6V to 5.5V). Power conversion is a very interesting area, as it requires special radiation-hardened design techniques (which typically increase the size of the integrated circuit [IC]) to ensure that the power FETs are not damaged by heavy ions in space. TI has some of the smallest point-of-load solutions on the market, including advanced power systems for powering double-data-rate (DDR) memory. Size improvements can drive down satellite costs significantly, as smaller, more efficient solutions reduce weight and thus launch costs, one the main drivers of satellite costs.

4. Communication. This subsystem is responsible for communication back to Earth, and sometimes with other spacecraft. Satellite communications are allotted certain frequencies in the analog domain via the radio spectrum. Simplistically, the analog data must be converted to the digital domain in order for the satellite to understand the communication. TI has significant expertise in this area, with some of the world’s fastest ADCs and DACs on the space market. This subsystem also requires point-of-load power, interface, operational amplifiers and clocking solutions.

5. Command and data handling (C&DH). This subsystem is responsible for processing and distributing data. Think of it like the satellite’s main computer. It is closely tied to the communication and ADCS when needed. This subsystem uses many different types of electronics, ranging from point-of-load power, application-specific integrated circuits (ASICs), field-programmable gate arrays (FPGAs), memory, processors, interface, operational amplifiers and clocking.

6. Thermal. This subsystem is basically the spacecraft’s heating and air conditioning. It is responsible for maintaining the electronics within specified operational temperatures. I also like to tie this system into a broader system called health monitoring, which includes temperature, current and voltage monitoring and control. As spacecrafts continue to become more advanced, I expect a lot of improvement in this area from the technical community.

As you can see, spacecrafts have extremely complex and interesting subsystems. Perhaps my insight will prepare you for your next trip to Mars, or at least get you thinking.

I encourage you to check out some of TI’s space technology at www.ti.com/space. And to see live demonstrations and learn about products from TI’s leading-edge radiation-hardened portfolio, visit booth No. 43 during the 2016 Institute of Electrical and Electronics Engineers (IEEE) Nuclear and Space Radiation Effects Conference (NSREC), starting next week.

What’s your involvement in and perspective about the various subsystems in a spacecraft? Sign in to join the conversation.