What are you sensing? Pros and cons of four temperature sensor types

Choosing temperature-sensing products may seem trivial, but with the wide variety of products available, this task can be quite daunting. In this blog post, I’ll present four types of temperature sensors – resistance temperature detectors (RTDs), thermocouples, thermistors and integrated circuit (IC) sensors with digital and analog interfaces – and discusses the pros and cons of each.

From a system-level standpoint, the right temperature sensor for your application will depend on the required temperature range, accuracy, linearity, solution cost, features, power consumption, solution size, mounting (surface mount vs. through-hole vs. off-board) and ease of designing the necessary support circuitry.

When measuring the resistance of an RTD while varying its temperature, the response is almost linear, behaving like a resistor. As shown in Figure 1, the RTD’s resistance curve is several degrees out of linearity (with a straight line shown for reference) but is highly predictable and repeatable. To compensate for this slight nonlinearity, most designers digitize the measured resistance value and use a lookup table within the microcontroller to apply correction factors. This repeatability and stability over a wide temperature range (roughly -250°C to +750°C) makes RTDs useful in high-precision applications, including measuring temperature of fluid or gas in pipes and tanks. 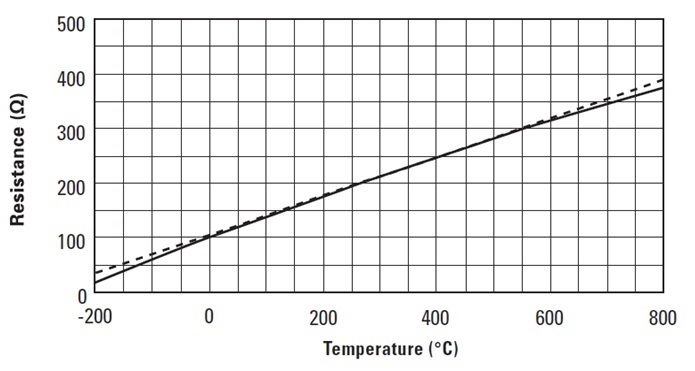 The complexity of the circuitry to process the RTD analog signal varies substantially based on the application. Components such as amplifiers and analog-to-digital converters (ADCs), which generate their own inaccuracies, are necessary. You can also achieve low-power operation by powering the sensor only when a measurement is necessary, but this complicates the circuitry even more. Plus, the power required to energize the sensor also raises its internal temperature, which affects measurement accuracy. With only a few milliamps of current, this self-heating effect can develop temperature errors that are correctable but require further consideration. Also, keep in mind that the cost of a wire-wound platinum or thin-film RTD can be relatively high, especially when compared to an IC sensor.

A thermistor is another type of resistive sensor. There are a wide variety of thermistors available, from inexpensive to high-precision products. The most common is the negative temperature coefficient (NTC) thermistor. NTC thermistors are low-cost, low-precision sensors that perform simple measurement or threshold-detection functions; require multiple components (such as a comparator, reference and discrete resistors); are very inexpensive; and have nonlinear resistance-temperature properties, as shown in Figure 2. If you need to measure a wide range of temperatures, you will need substantial linearization. Calibrating to several temperature points may also be necessary. 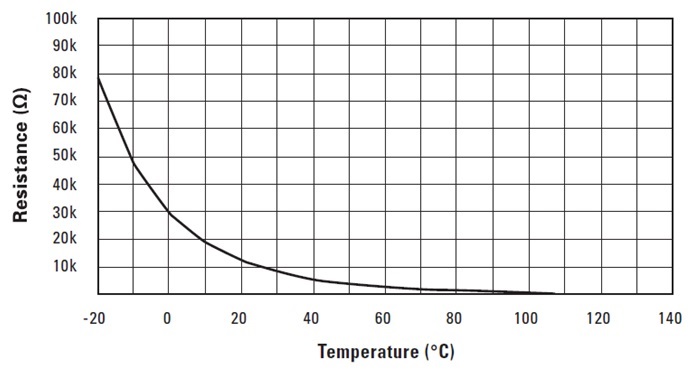 A thermocouple consists of a junction of two wires made of different materials. A Type J thermocouple, for example, is made from iron and constantan. As shown in Figure 3, junction 1 is located at the temperature to be measured, while junctions 2 and 3 are kept at a different temperature measured with an LM35 analog temperature sensor. The output voltage is approximately proportional to the difference in these two temperature values.

Because a thermocouple’s sensitivity is rather small (on the order of tens of microvolts per degrees Celsius), you would need a low-offset amplifier to produce a usable output voltage. Nonlinearities in the temperature-to-voltage transfer function over a thermocouple’s operating range often necessitate compensation circuits or lookup tables, as with RTDs and thermocouples. However, despite these drawbacks, thermocouples are very popular, particularly for ovens, water heaters, kilns, test equipment, and other industrial processes, because of their low thermal mass and wide operating temperature range, extending beyond 2300°C.

IC sensors can operate within a temperature range from -55°C to +150°C – a select few can go as high as +200°C. There are various types of integrated IC sensors, but the four most common are analog output devices, digital interface devices, remote temperature sensors, and those with thermostat functionality (temperature switches). Analog output devices (usually a voltage, but some with current outputs) are most like passive solutions in their need for an ADC to digitize the output signal. Digital interface devices most commonly use a two-wire interface (I2C or PMBus) and have an ADC built in.

Aside from also including a local temperature sensor, remote temperature sensors have one or more inputs to monitor a remote diode temperature, which are most often located in a highly integrated digital IC (for example, a processor or field-programmable gate array [FPGA]). Thermostats provide a simple alert when a temperature threshold is reached.

There are many benefits to using IC sensors, including low power consumption, package offerings (some as small as 0.8 mm x 0.8 mm) and low device cost in certain applications. Furthermore, since IC sensors are calibrated during production testing, there is no need to calibrate further. They are often used in fitness tracking, wearables, computing systems, data loggers and automotive applications.

Savvy board designers will make use of the most appropriate solution depending on the end product requirements. Table 1 shows the relative advantages/disadvantages of each type of temperature sensor.

Table 1: The relative advantages and disadvantages of RTDs, thermistors, thermocouples and IC sensors

Stay tuned for more temperature basics blog posts from me and my colleagues in the coming months. Please comment below and let us know if there are any topics you would like us to cover.