What is a Hall-effect sensor?

A Hall-effect sensor, also known as a Hall sensor, monitors magnetic fields with high accuracy, consistency and reliability. Why is that important? Because it enables you to sense the position and movement of objects in a system. In this article, I’ll explain what a Hall-effect sensor is, its basic building blocks and functionality, and common use cases for Hall-effect sensing products.

Magnetic fields are never straight lines, as they extend from one pole to the other, but Figure 1 shows straight lines impinging on the sensor for simplicity. Knowing exactly how these field vectors behave in space allows you to do many creative things with them. Check out the application notes on TI’s Magnetic Sensors Support and Training page for some basic ideas.

Ever thought about how Hall-effect sensors work? The simple answer is that a small voltage develops across a piece of conductive material, crowding electrons to one side as current is forced through the conductor and a magnetic field is applied in an orthogonal direction (see Figure 2). This voltage potential is attributed to the Lorentz force, discovered by Edwin Hall in 1879. 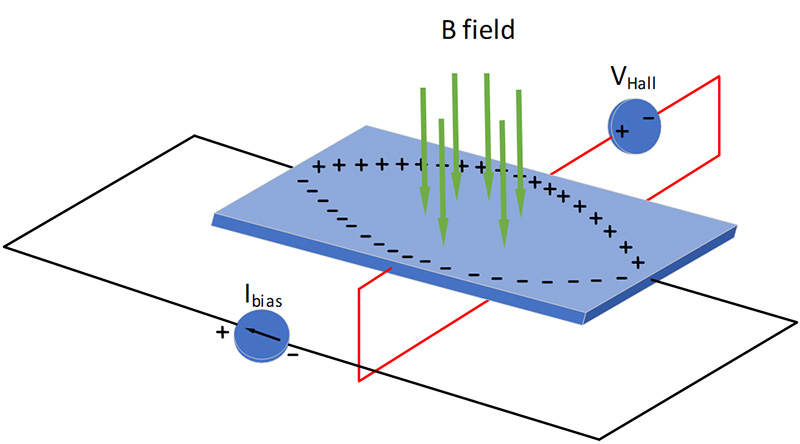 This foundational understanding of how Hall-effect sensors function is necessary so that you know how to use them effectively, with proper position relative to a magnet. But you also need to know how the magnetic fields produced by a magnet behave with distance. Figure 3 shows a simple graph of how a magnetic field decays over distance from the magnet. 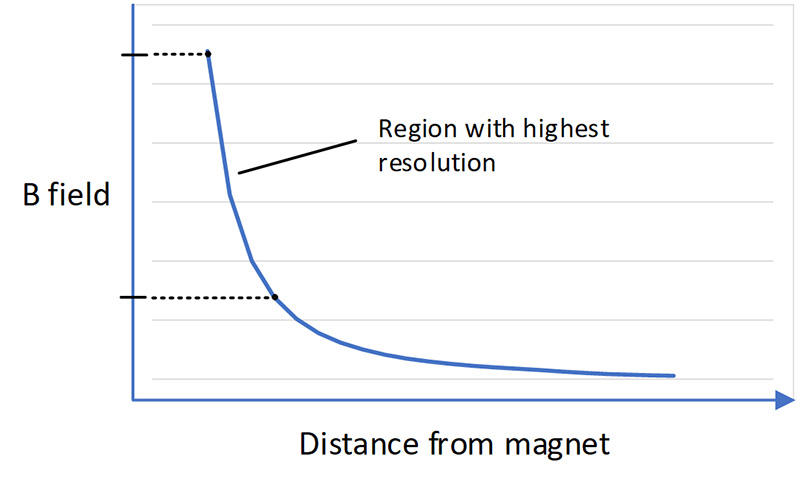 To maximize the measurement resolution, you will need to ensure that the system’s minimum-to-maximum distance values are within the region with the greatest change in magnetic field.

There are three types of position Hall-effect sensors available today:

The magnetic points BOP and BRP in switches and latches define the hysteresis value (BHYS = BOP - BRP). Leveraging hysteresis in your system will prevent bouncing back and forth between output states.

Switches are common in laptops, refrigerator doors and end-of-line switches to detect when a magnet comes in close proximity to the sensor. Latches are popular in rotary encoding and motor commutation applications, where the rotational aspect of the application is ripe for continuously monitoring the position of the rotating shaft. Linear sensors can accurately measure the displacement of an object, so they are suitable for linear actuators, variable speed triggers and acceleration pedals.

Hall-effect sensors provide a cost-effective way to monitor moving objects. Depending on the application, you can use a switch, latch or linear sensor. If you’d like to continue learning about Hall-effect sensors, I encourage you to check out our TI Precision Labs training series on magnetic sensors.