In my last post, I discussed what an electrical fast transient (EFT) is at a high-level. For part two, let’s explore why EFTs matter and why they should be considered during your design process.

First, acceptable amounts of interference will vary greatly from application to application and could ultimately affect your bottom line. Since testing and robust design techniques can add delays and costs, you must consider EFT during the product development cycle.

Second, your application could be damaged if not properly protected from EFTs. EFT can appear as voltage spikes on signal/control lines, power lines (AC or DC), or both as a result of one line coupling in to the other; if an EFT couples into the power portion of you circuit, there is a high probability that the transients will occur on the data lines as well. The net effect of these transients can range from bit errors/loss of valid communication to catastrophic product and system damage. The level that the system performs during these strikes is described by performance criteria levels A, B, C, and D, which are defined in Table 1.

These levels create a standard way of describing system performance regardless of end application. Whether transient pulses cause catastrophic damage to devices, or just data corruption at the receiving end, you can and should mitigate them as much as possible.

EFTs cannot always be completely removed from the system, however; in some instances you can only account for and diminish them so that they do not impair performance more than the application allows.

As I stated in my last blog, EFTs are inherent to systems that have an inductive load connected, typically through a switch or a relay. When the switch/relay is toggled, or the power to the inductive load is interrupted, fast transient voltage spikes occur due to the instantaneous change in current. Once generated, these voltage spikes can propagate through system power lines and ground. They may also couple into the data lines through electromagnetic radiation or mutual capacitance/inductance if they are in close proximity to data and power lines. Figure 1 shows a simplified example of how and why this occurs in circuits with inductive loads.

Figure 1: A simplified circuit that would cause an EFT

Let’s revisit the motor control application from my last post to understand how EFT problems can manifest themselves in a real application. In motor control applications, communication lines carry encoder data for precise rotor position or angle, as well as feedback information from the motor for additional safety features and predictive maintenance. The trend in this maintenance and safety feature technology is only going to become more precise and robust, so this communication is crucial for optimal system performance. When an EFT occurs and corrupts the data packets, the known position of the rotor is lost. The net effect is power efficiency loss to the motor; more extreme cases will cause the motor to stop functioning completely, forcing a full power reset.

In order to avoid these effects, you can implement external components for filtering and protection on the printed circuit board (PCB), and include data redundancy or error checks as part of the communication protocol. Selecting transceiver devices designed to withstand EFT will also help create a robust data link that will only further improve overall system performance. Figure 2 shows a diagram of the motor control application and where the EFT can affect the data and power lines. 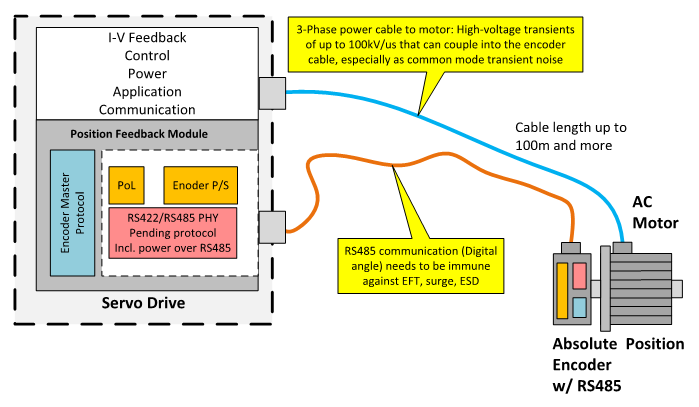 For any system that could experience EFTs, TI’s THVD1550 and THVD1450 series of RS-485 transceivers will complement a design that includes proper mitigation and handling of these strikes. Removing the burden of excessive external components for protection, these transceivers have been tested and proven to withstand EFTs at ±4000-V. Recalling Table 1, this means that performance criteria A is possible for a system using these devices. 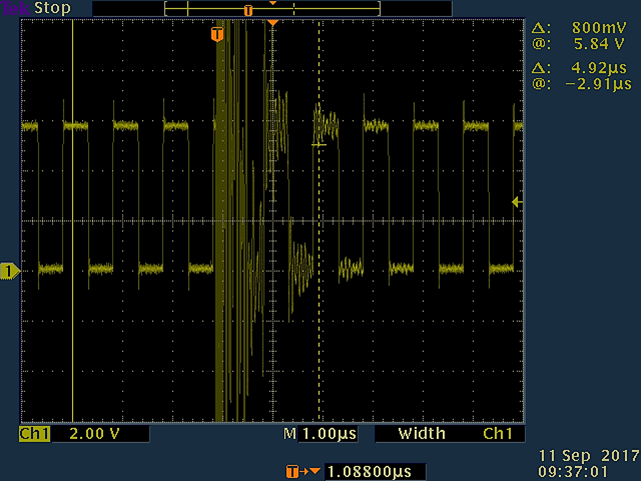 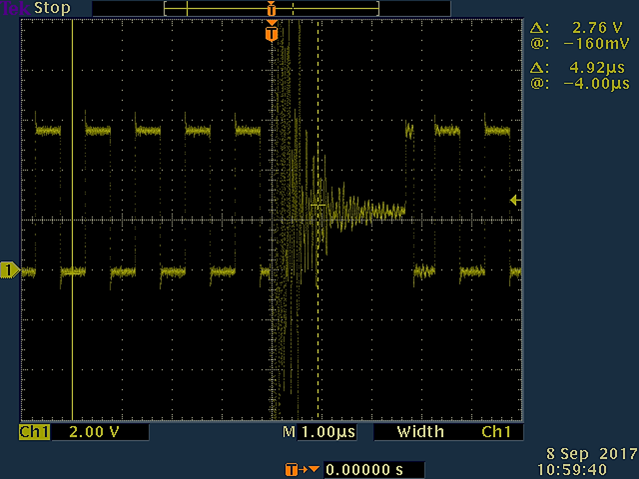 As you can see, the competing device skips about four bits (not including the miss on the initial strike) before recovering while the THVD1550 shows the EFT pulse but promptly recovers to continue communication. As I said before, at the transceiver level, the EFT strike will inevitably show up on the communication line; what’s important is how well and quickly the physical layer communicates after the strike. On the THVD1550, the measurements show the EFT strike covering up one positive-to-negative transition; immediately after, a negative-to-positive transition occurs. Although the high bit after the EFT strike is noisy, it is still present, and in a system with redundancy checks and filtering, it would be much easier to handle the noise from the strike than if the transceiver completely dropped communication, which is what happened with the competing device.

Now that you know what EFTs are and why they are important, you can begin to ask the right questions and properly prepare for designing a system that will perform correctly through EFT. I hope this introduction to a complex topic offered insight into an avoidable issue, and showed why TI’s transceivers are a good option for your RS-485 products.