What you need to know about input bias current – and why

One of my standard interview questions for new college graduates is to describe the non-ideal aspects of an operational amplifier (op amp). While most candidates start with open-loop gain, offset voltage, bandwidth and noise, only a few mention input bias current. Even experienced circuit designers often have questions about input bias current and its effects. In this post, I’ll answer some of these questions and hopefully clear up some misconceptions.

Q: What is input bias current?

A: The term “input bias current” (IB) in datasheets – for both op amps and fully differential amplifiers (FDAs) – refers to the DC currents flowing into or out of the amplifier’s input pins to create a defined operating point during normal operation, as shown in Figure 1.

Q: Why do you need BJT-input amplifiers?

A: Since CMOS amplifiers have almost negligible input bias currents, why do you even need BJT amplifiers? The answer is that a BJT has much larger transconductance (gm) compared to a CMOS transistor at the same quiescent current. In addition, matching between BJTs is also a lot better, and so is its flicker (or 1/f noise). All three advantages are crucial for high-speed precision amplifiers; hence, BJT inputs are ubiquitous in high-performance op amps and FDAs.

Q: How do you evaluate the effects of input bias currents?

A: While using amplifiers with significant input bias currents often requires some additional design considerations, you might be surprised to find how little they actually affect system performance. Once you understand the effects of input bias current, you can weigh the benefits of a BJT-input amplifier against these effects.

Let’s investigate the effects of input bias currents using the FDA circuit shown in Figure 2. The THS4551 is the newest addition to TI’s family of precision analog-to-digital converter (ADC) drivers. The THS4551 features not only 150MHz bandwidth on 1.35mA Iq, but also ±2µV/°C max VOS drift, as shown in Table 1. The BJT-input architecture enables such performance but creates a notable IB. 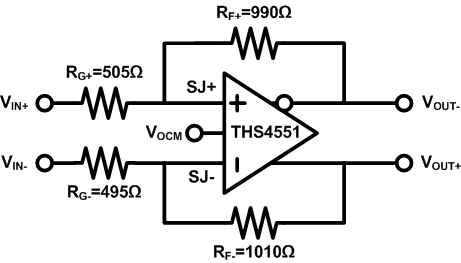 Focusing on the mathematically simplest case, let’s first assume that the FDAs are always connected with symmetrical feedback elements, since this leads to minimum signal conversion from the common-mode errors to the differential output.

Then, use Equation 2 to calculate VOUT based on the gain from the summing junction to the output, which is the noise gain:

Combining Equations 1 and 2 together, you can calculate VOOS at the output as the difference between these two output voltages with Equation 3:

The output VOOS is simply the difference between the input bias currents on each side, multiplied by their respective feedback-resistor values (RF). The gain resistor (RG) has dropped out of the VOOS equation. Intuitively, this is because a small RG, which would have reduced the impact of IB on the summing-junction voltage, also increases the noise gain from summing junction to output, and the two effects cancel each other.

Let’s use the circuit in Figure 2 and the specs of the THS4551 in Table 1 to calculate the worst-case output VOOS from each contributing factor (input VOS, IB and IOS), listed in Table 2.

Now, let’s look at four cases for different resistor values and tolerances in the circuit. For two values of RF (1kΩ and 5kΩ) and two tolerances (1% and 0.1%), Table 3 shows the results.

Similarly, Figure 4 shows the results for the output-offset drift.

A couple of takeaways:

Q: What about input-current noise?

A: Most of this post is about the impact of IB and IOS on offset voltage and offset-voltage drift. Another important effect of input current is added noise. Luckily, noise is just a time-varying offset, so you can calculate the effect of noise just as you calculated the effect of offset. For example, the output-voltage noise due to the input-current noise  is simply

What is your experience dealing with issues due to input bias current? I have only scratched the surface of IB effects, and haven’t mentioned many secondary issues. What more do you want to know? Log in below and leave a comment.