Where are ultrasonic sensors used? – Part 1

Ultrasonic park assist is also known as a parking assist system, parking guidance system and reverse park assist. These systems vary from simply detecting an object’s presence and alerting the driver with a noise to autonomously parking the car with little to no driver interaction. Typically, these systems have between four and 16 sensors placed strategically around the car to provide the desired detection coverage, as shown in Figure 2.

Engineers designing these types of applications should seek out integrated circuits (ICs) driving an ultrasonic transducer (transmitter) while receiving, conditioning and processing the ultrasonic echo that determines the distance of an object from the vehicle. For example, the PGA460-Q1 can reliably detect an International Organization for Standardization (ISO) pole (polyvinyl chloride [PVC] pipe used in ultrasonic park assist as a performance standard) up to 5m away. The device has also passed stringent electrostatic discharge (ESD) and bulk-current injection (BCI) testing – common tests performed during ultrasonic park assist system developments.

Ultrasonic park assist cost pressures will continue to increase over the next several years as original equipment manufacturers (OEMs) face the need to add more ultrasonic sensors per vehicle. The PGA460-Q1 supports a competitive cost structure for high-volume Tier-1 suppliers.

In order to meet the needs of autonomous vehicles, short- and long-distance object-detection standards will become more stringent. Beginning around 2025, ultrasonic modules will have to detect objects from 10cm to 7m away. Improvements in analog front end (AFE) sensitivity and drive methods by semiconductor suppliers will be crucial in meeting these distance requirements.

TCI and LIN are the two most common communication interfaces in ultrasonic park assist systems today. However, as vehicles advance in their advanced driver-assistance system (ADAS) vision-processing abilities, expect the use of higher-speed protocols like Peripheral Sensor Interface (PSI) 5, Distributed Systems Interface (DSI) 3 or Controller Area Network (CAN) to communicate larger amounts of ultrasonic echo data.

A kick-to-open liftgate is also known as a smart trunk opener. This feature enables vehicle owners to place their foot under the back bumper in a kicking motion to open the trunk of the vehicle without using their hands, as shown in Figure 3. 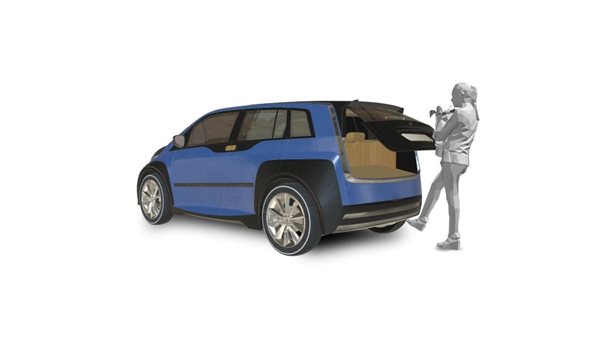 Traditional kick-to-open liftgate systems used capacitive sensing strips located across the bottom of the bumper. However, many automotive Tier-1 suppliers are exploring ultrasonic sensing for this application, with some systems already in mass production. The advantage of ultrasonic sensing vs. capacitive sensing is the latter’s reliability and robustness against environmental factors such as dirt and water compared to capacitive sensing, which is very sensitive to environmental factors and may not work when a car is dirty.

Common requirements in ultrasonic solutions for kick-to-open systems include:

Let’s break down each of these requirements.

Object detection from 15cm-1m away

One of the challenges with using ultrasonic sensing in a kick-to-open liftgate application is the close distance detection range. The ability of an ultrasonic sensor to accurately detect near-field objects depends on the quality and specification of the transducer, the driver method and design, and the performance of the receive path (AFE and digital processing). 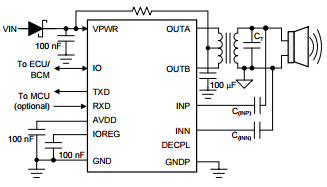 When using a transformer to increase the supply voltage to excite the transducer, the decay profile is more predictable and less “choppy,” resulting in better near-range object-detection performance.

Finally, the performance of the AFE and digital processing affect near and far object detection. For example, the PGA460-Q1 has a low-noise amplifier followed by a programmable time-varying gain stage feeding into a 12-bit successive approximation register analog-to-digital converter. The low-noise amplifier reduces noise from the received signal, and the programmable gain amplifier’s time-varying gain feature enables small gain applied to near-field objects and larger gain for far-field object detection. You can set the gain profile settings in the register for storage in electrically erasable programmable read-only memory (EEPROM).

Since kick-to-open ultrasonic sensors must operate with the vehicle off, system quiescent current is critical and specified aggressively by OEMs. The PGA460-Q1 has a ~500µA sleep mode that you can use intermittently to bring the overall system’s current consumption to the necessary levels.

Ability to operate off of a 12V car battery supply

The PGA460-Q1 device is designed to operate from an input voltage supply range from 6V to 28V. In kick-to-open liftgate applications, the PGA460-Q1 device connects directly to a car battery. Proper external component safeguards such as a transient voltage suppression (TVS) diode help protect the device from battery transients and reverse-battery currents.

In Europe, an intrusion detection alarm is optional equipment that the consumer can select at the time of purchase or have installed after market. These alarms use ultrasonic sensors to detect any movement inside the vehicle when the car is off and parked. This alarm acts as a backup for the primary alarm system, and will also set off the alarm if children or pets are moving inside the vehicle. Consumers often receive insurance discounts for including this feature in their vehicle depending on the specific region where they live because of the additional anti-theft and safety protection provided.

Most systems use one to two ultrasonic transmitters and one to two receivers. Ultrasonic sensors like the PGA460-Q1 can drive and receive one transmitter and one receiver, so one to two PGA460-Q1 devices may be required.