Where are ultrasonic sensors used? – Part 2

Consumer drones have grown in popularity in recent years, used to capture stunning footage, carry rescue supplies and even for racing. Most drones use various sensing technologies for autonomous navigation, collision detection and many other functions. Ultrasonic sensing in particular assists with drone landing, hovering and ground tracking.

Drone-landing assist is a drone’s ability to detect the distance from the bottom of the drone to the landing area, decide if the spot is safe to land, and then slowly descend to the landing area. While GPS monitoring, barometric sensing and other sensing technologies assist in the landing process, ultrasonic sensing is the primary and most accurate source of knowledge for the drone during this process. There are also hover and ground tracking modes in most drones, primarily used for capturing footage and land navigation, in which the ultrasonic sensors help to keep the drone at a constant height above the ground. Part 1 of this blog series discussed how ultrasonic sensors can be designed into automotive applications. This blog will explore the reasons ultrasonic sensing can be used for these drone applications.

Ultrasound is defined by the use of sound waves with a frequency above the upper limit of human hearing – see Figure 1.

Ultrasound waves can travel through a wide variety of media (gases, liquids, solids) to detect objects with mismatched acoustic impedances. The speed of sound is the distance per unit time by a sound wave as it propagates through an elastic medium. For example, in dry air at 20°C (68°F), the speed of sound is 343 meters per second (1,125 feet per second). Ultrasound attenuation in air increases as a function of frequency and humidity. Therefore, air-coupled ultrasound is typically limited to frequencies below 500kHz due to excessive path loss/absorption.

As with many ultrasonic sensing applications, drone-landing assist uses the time-of-flight (ToF) principle. ToF is a round-trip time estimation of an ultrasonic wave emitted from a sensor to a targeted object and then reflected back from the object to the sensor, as shown in Figure 2. 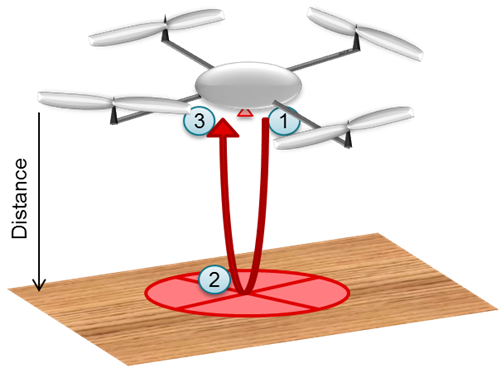 where distance (d) is the distance from the ultrasonic sensor on the drone to the ground/object, ToF (t) is the ToF as defined earlier, and SpeedOfSound (v) is the speed of sound through the medium. The ToF (t) × SpeedOfSound (v) is divided by 2 because ToF calculates the round-trip time of an ultrasound echo traversing to and from the object.

Why should you use ultrasonic sensing for drone landing?

While numerous sensing technologies can detect the proximity of an object, ultrasonic sensing works well in drone landing for its detection range, solution cost and reliability across different surfaces.

A common requirement for drone ground tracking and landing is the ability to reliably detect the ground up to 5m away. Ultrasonic sensors in the range of 40-60kHz can typically meet this range, assuming proper signal conditioning and processing.

Ultrasonic sensing is also a cost-competitive technology, especially when using an integrated solution such as the PGA460, which includes most of the silicon needed. The PGA460 can either directly drive the transducer using a half-bridge or H-bridge, or drive the transducer using a transformer; the latter is used primarily for hermetically sealed “closed-top” transducers. The PGA460 also includes the full analog front end for receiving and conditioning the ultrasonic echo. In addition, the device can compute the ToF through digital signal processing – see Figure 4. 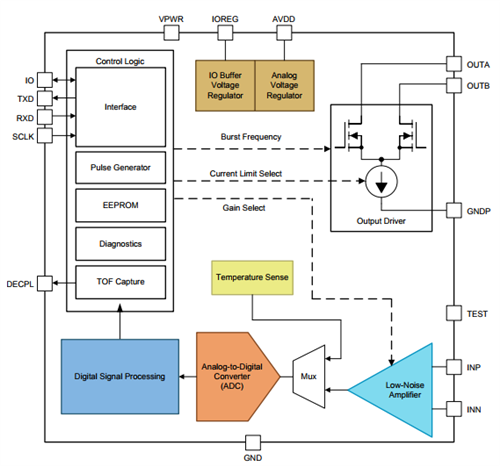 Finally, ultrasonic sensing can detect surfaces that can be tricky for some other technologies. For example, drones frequently encounter glass windows and other glass surfaces on buildings. Light-based sensing technologies sometimes pass through glass and other transparent materials, which can pose a problem for drones hovering over a glass building. Ultrasound reliably reflects off of glass surfaces.

While ultrasonic sensing is primarily used for landing assist and hovering in drones today, its strong price-to-performance ratio is motivating drone designers to explore additional applications of the technology. In the rapidly evolving drone space, the possibilities are vast.