Why current and magnetic sensing matters for wireless earbud design

Wireless earbuds have infiltrated the electronics market in recent years. Users can now walk away from their streaming devices without the fear of being yanked back by a caught wire. True wireless earbuds are Bluetooth®-based wireless earbuds that have their left and right channels separated into individual housings. And while this innovation has freed consumers from having to be connected to their phones by a wire, it has also presented a host of new design challenges for earbud manufacturers.

The batteries in wireless earbuds are often in the sub 100-mAh range. Therefore, better current measurement is necessary in order to protect and accurately charge these smaller-capacity cells. Traditional battery chargers and gauges do an excellent job of monitoring larger currents for batteries like those in a charging case, but often do not fare well at super-low currents.

Dedicated current-sense amplifiers are more accurate when measuring small currents. If you already have a microcontroller (MCU) or power-management integrated circuit (PMIC) in your design, you can use the output of these amplifiers to monitor and gauge battery use times and lifetimes based on algorithms written in the MCU or PMIC.Figure 1 shows a battery fuel gauge with an external current-sense amplifier and controller. 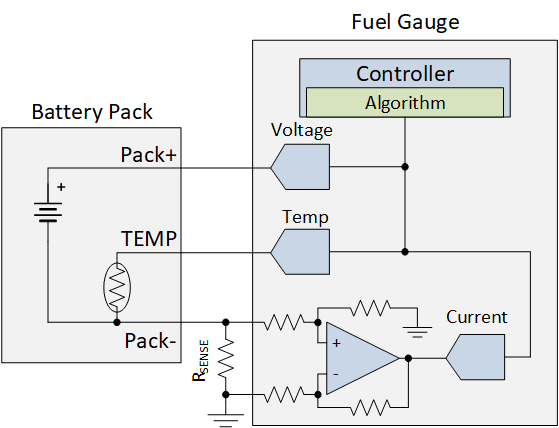 If accuracy is less important, and assuming an equal current division, one current sensor can monitor charging in both earbuds. Placing bidirectional-capable current-sense amplifiers like the INA191 or INA210 in the earbuds themselves will enable both charging and gauging functionalities. Regardless of which topology you choose, these devices can also enable better battery protection, as even small changes in current can affect battery lifetimes.

A new feature of wireless earbuds is lid and charge detection within their companion charging cases. Charging cases must be able to detect the position of the lid and be able to detect the presence of the earbuds inside the case for charging. Other sensor technologies may not have the ability or sensitivity to discern these things correctly in a cost-effective manner, so choosing the right sensor is crucial. Figure 2 shows wireless earbud sensor placement.

Choosing the right digital Hall-effect sensor is important, and features such as low frequency and low power make the DRV5032 a good fit. For Hall-effect sensor applications in earbuds, providing magnet detection information five times per second is more than enough. This frequency allows you to use the DRV5032’s low-power option, which consumes only about 0.5 µA and does not place a significant drain on the device’s battery.

Determining state of charge and charging case lid detection are both critically important to earbuds with their small-capacity batteries and wireless connectivity. Current-sense amplifiers and Hall-effect sensors provide a solution for those struggling to design around these new features and challenges.