You can be an electromechanical engineer

Although many electronics engineers have their heads buried in schematics, capacitors, amplifiers, voltages, frequencies, timings and impedance, real-world implementations take form as physical systems that have to fit within the final product and interface electrically and mechanically with everything on the outside. While the mechanical work is usually tackled by mechanical engineers, there’s a lot that electrical engineers can bring to the table by designing with magnetic sensors.

Do you want to build a device that magically comes to life when the user moves one of the components? It could be a coffee maker, a seat detector, a leather phone cover, a robot, an appliance – or some other gadget that doesn’t even exist yet. A well-positioned Hall effect sensor and corresponding magnet can be your position sensor, acting invisibly to the user.

For on/off proximity detection, TI has a new ultra-low-power family of Hall switches, the DRV5032.  With the lowest-power version operating from a scant 0.54 µA from 1.8 V, it won’t drain batteries when the rest of the system is off, and the sensor can act as a front-end power gate for waking up the rest of the system, as shown in Figure 1. The TI TechNote, “Power Gating Systems with Magnetic Sensors,” elaborates on this type of usage.

Or maybe what you need is to somehow translate rotational movement into digital data.  It could be from a motor, human-interface knob, fan, wheel or impeller that turns as fluid moves by.  A simple and robust way to do this is to attach a multipole magnet to the rotating component and position stationary Hall latch devices nearby. As the component rotates, alternating north and south magnetic poles move by the sensors, causing them to generate high and low pulses that are easy for a microcontroller to interpret. Using two sensors provides directional information, since the order of 2-bit states can be compared. Figure 2 shows this. 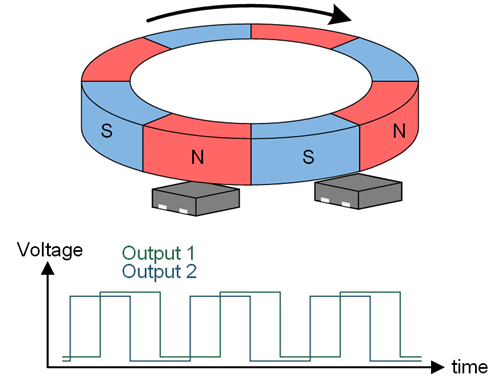 The new DRV5012 is an ultra-low-power Hall latch that can be used for this.  With its pin-selectable sampling rate, the device can either sample at 20 Hz using 1.3 µA, or 2.5 kHz using 142 µA, for optimal power consumption based on the rotational speed needed. The TI TechNote, “Incremental Rotary Encoder Design Considerations,” describes more information.

To help demonstrate the practicality of these ultra-low-power position sensors, TI released a solar-powered evaluation module. Using just the ambient light of a room, the solar cell provides ample power for the DRV5032 Hall sensor and flashes the LED when the magnetic threshold is crossed. Although a standard CR2032 battery can power a DRV5032 for 20 years, using a solar cell can further extend the life and provide extra power for the rest of the system.